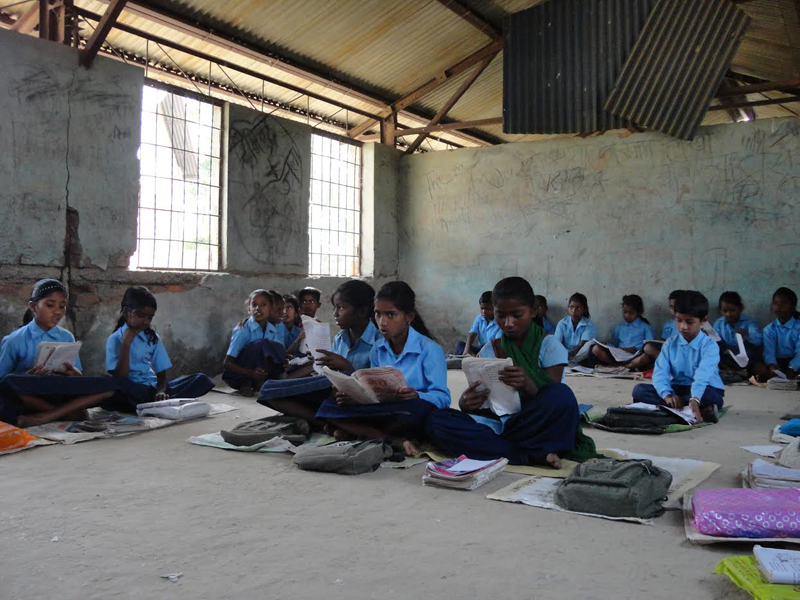 Students of Janata Lower Secondary School sitting on the floor as school has no sufficient furniture.

JANAKPUR, May 3: On her way to school, fifth-grader Priti Kumari Yadav carries an empty sack to use as a mattress to sit on in her class. Yadav and her 33 classmates do the same because there is no furniture.

Janata Lower Secondary School, which is in a village called Sapahi near Dhalkebar-Janakpur road, has no furniture for more than one-third of the total 180 students. In contrast, a nearby school barely 400 meters away has over 22 sets of spare desks and benches which are not in use.

Asked why they don’t support their neighboring school, Hari Pandit, the headmaster of Shri Ram Gurukul said they cannot do so. Gurukul has only 30 students including nine students in grade 1 to 3 and 20 in kindergarten. Pandit and another lady are the only teachers of the school.

Another school which is about a kilometer away from Gurukul has no students as the school building is under construction. Chairman of that school, Ganesh Yadav, has papers showing few students enrolled in the school but they study elsewhere in a private school.

Yadav got the permission to open the school in 2012 and hopes to pay the school’s only teacher Naresh Yadav, who is also his brother, after getting some money from the parliamentarian development fund from his brother-in-law and lawmaker of Nepali Congress Mahendra Yadav.
There are resources for public schools but lack of coordination and misuse of resources have caused such shortage.

Like dozens of other schools in this district, locals and guardians have been competing to clinch the posts of the School Management Committee chair and members just to benefit from the resources and government grants. The government’s policy of financing based on the number of students has encouraged to open schools even without needs.

Almost all schools in the district have had the needful classrooms built with government grants but they lack furniture and teachers compelled to teach several classes at a time, according to teachers and government officials.

District Education Office provides a lump sum for school building and furniture depending upon the need and it is mandatory for local community to contribute 10 percent amount through voluntary works or cash/kind. However, the administrations of various schools have built buildings with the government money but have not purchased furniture.

“We provide an amount starting from Rs 1.3 million for a block of two rooms and the amount is also for furniture but most of them have neither finished school building nor have purchased furniture as per their commitment, resulting in their expenditure arrears,” said Mahendra Mahato, district education officer of Dhanusha.

A school teacher at Nagarain Municipality blamed headmasters of not managing furniture though the building grants and said that the headmasters are not transparent in financial matters. The teacher requested anonymity fearing retribution from the headmaster of his school.

Ram Saroj Das, a teacher of Nagarain-based Akhileswornath Rastriya Primary School, said that the locals do not contribute to the schools like people in the hills do. Das worked at a public school for ten years in Kailali district and recently got transferred to this school.

“Locals eye just to acquire and take hold of resources but do not contribute anything,” Das added.
Kuleswor Das, who is the headmaster of Sapahi-based Gyanodaya Lower Secondary School since 1993, expressed his frustration for not getting any support from the local community. He expressed his desire to get transferred to another school.

“I am the only teacher to teach students of grades six, seven and eight and lack of furniture is another problem in my school,” Das explained his woes.

“The school premises have an orchard of mango trees. Just a single tree can provide the needful furniture,” said Das, adding that he cannot use them because a neighbor claims the land of the school as his own.

This school has no School Management Committee and only one school out of 15 schools visited for this report had an active SMC.

Schools having enough local income sources also suffer from mismanagement. Locals compete for SMC posts which sometimes escalate to scuffle too. Lack of transparency regarding the resources is another issue in the schools.

Nagarain Municipality-based Rastriya Lower Secondary School earns Rs 635,000 per annum from its fish pond but the election of the SMC was put on hold after headmaster Dhani Ram Thakur could not furnish proper records of spending last year.

“The headmaster could not produce all the records of the spending,” said Nageswor Thakur, former SMC chairman of Rastriya Lower Secondary School.

Headmaster Thakur accepted that he could not produce records but declined to divulge the details. He only shared his frustration of working in this school without support from teachers and community.

Dipendra Thakur, a teacher of the school said, “The headmaster is not transparent and does not want to work in collaboration with others.”

Surendra Labh, professor of Ramswarup Ramsagar Multiple Campus, estimates that there are hardly one percent schools running well in this district.

“The school education in the tarai is getting worse due to politics and the Madesh Movement of 2007 had the latest such effect,” said Labh. The district education officers were shuffled so frequently that the district got 22 DEOs in the last nine years.

“Frequent change of DEOs shows that District Education Office has been a haven of corruption. On top of that, petty political interest coupled with intervention by the teachers’ union have been blamed for the degradation of school education,” added Labh.

MAHOTTARI, Jan 21: Over 35 schools in Mahottari do not have government quota for teachers. Similarly, nobody really takes notice whether... Read More...