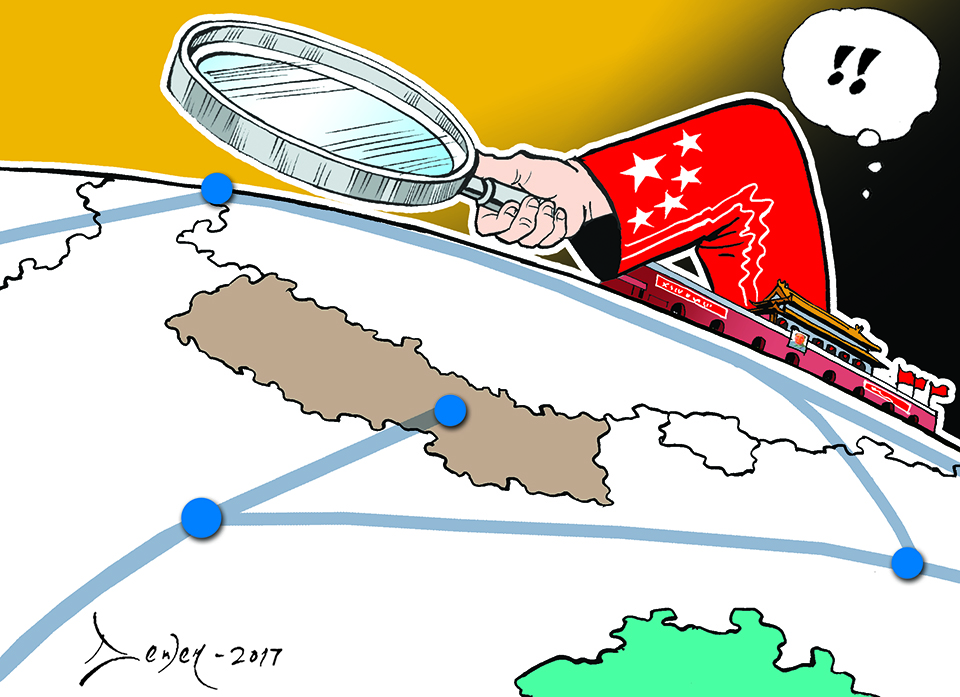 Nepalis know that they cannot afford to be anti-India but when they witness open Indian meddling they won’t stay quiet either.

The show was telling because it offered insights on what India, or at least a section of India, still thinks of Nepal vis-à-vis China, how they are literally scared of Chinese engagement with Nepal and how they still nurture misunderstanding about Nepal, even after so much has been reported in the past two years—both in Indian and Nepali media—about Nepal’s constitution, Indian blockade and Nepali politics.

Lest such misunderstanding is made another irritant in Nepal-India relation that looks now to be getting back on track after the blockade, the panelists need to be set straight, albeit late, albeit through Nepali press.

The focus was on preventing CPN-UML chief K P Oli from coming to power so that Nepal’s outreach to China can be restricted. “If Oli and his gang manage to come back to power, that will be a major setback to our interest,” said Sibal. India should do everything possible to prevent this, he argued. Bharat Bhusan went a step forward: “Nepali political elites” and intellectual elites “hate India.” Pahades are not with India, they had never been.

Nepal is essentially anti-India today. Bhusan was as much worried about Oli. Oli coming back to power will be “disastrous not only for India but also for Nepal,” he said. He blamed Oli for creating problems with Madhesis and advocated for strategies to “counter China.”
S D Muni presented a balanced perspective.  He was of the view that India should not blame only Oli for failure of the constitution amendment bill. “Why did some Congress and Maoist leaders not go to vote for amendment?  India should be not so scared of Oli factor. The challenge is China.”

It is dispiriting that Indian commentators still remain willfully uninformed about Nepal. They dismiss the views that are critical of India as “anti-India.” Anti-India is a big word. Indians could call Pakistan anti-India but you cannot put Nepal under this category. Let Indian commentators know. A critical mass has evolved in Nepal after the 2015 blockade. They carefully watch Indian gestures, right or wrong, towards Nepal and will raise their voice if India is seen as unnecessarily intervening in Nepal’s affairs. This in no way amounts to being ‘anti-India’.

What led K P Oli, whom India had considered as its ‘trusted fellow’ for long, to stand against 2015/16 Indian blockade may become public knowledge sometimes in the future. Oli used to be criticized in Nepal for being ‘India’s man’ until recently. He has the baggage of ‘selling out’ Mahakali River to India in the 1990s in a deal that is seen as favoring India more than Nepal.

It is wrong to single out Oli as the only actor to resist Indian pressure during the constitution promulgation. All three parties had stood together then. Cracks appeared in this unity when Nepali Congress refused to hand over the reins to UML, as promised by Congress at the time of signing 16-point agreement in June 2015 that paved the way for promulgation of the constitution.

Even if UML had capitulated to Indian pressure during the blockade, some force—big or small—would have spoken against it anyway. If India invests its energy in defeating ‘Oli and his gang’ in the upcoming elections, this will again fan anti-India sentiment, which is slowly cooling down at the moment.

No doubt, Oli sounds bitter and conceited. He presents himself as the only leader capable of safeguarding national interest. He failed to deliver on governance during his premiership. It is not for this that he is appreciated. Rather his unequivocal stand against Indian interference and his landmark trade and transit deal with China are acknowledged across party lines.

Firebrand critic of Indian meddling today, Oli might once again turn to India. Two years ago, no one would have imagined Pushpa Kamal Dahal, whose insurgency era politics was founded on his anti-India rhetoric, would become India’s ‘friend.’ At least at the moment, Oli represents sentiments shared by majority of Nepali people who suffered during the blockade. This sentiment will thrive when Indian high-handedness increases and mellow down when Indian lets Nepal on its own.

One big mistake Indian commentators make is they tend to react when China makes overtures towards Nepal and vice versa. When Nepal gets close to China or when China offers development aid to Nepal, India understands it as Nepal playing China card against India. This is another wrong perception. Post-2006 change, almost every Nepali prime minister that visited India has also gone to China. Since the ancient times, Nepal’s foreign relation has been guided by the idea of remaining in good books of both India and China. Prime Minister Deuba was playing by the rule of this old book, perhaps instinctively,  when he told India’s Consumer Affairs, Food and Public Distribution Minister Ram Vilash Paswan: “China is a good friend of Nepal … China has always respected Nepal’s sovereignty.”

Deuba’s successors, whoever they are, won’t be able to depart from this line. UML has built its image as a pro-China party. But there is not a single Nepali leader these days who publicly speak against China. Even Madhesi leaders—under whose watch the protesters burnt Chinese flag during 2015 Madhes protest—are careful enough not to offend China. They describe China as Nepal’s ‘friend in need’.

Whether Nepali actors will be able to manage delicate balance between India and China is a different matter (often they have failed to do so). But for the foreseeable future, India will not find a politician who can afford to remain in good books of India by publicly criticizing China and vice versa. The strategy of using Nepal to counter China will fail, just as Nepal’s pro-China and pro-India tricks are bound to fail. That even China and India cannot afford to remain on unfriendly terms was evidenced by the recent Doklam issue and its peaceful resolution.

India should stop judging Nepal based on whether it is maintaining distance with or getting close to China. India needs to get rid of the illusion that pitting one party against other will help it. That old strategy has failed. Nepal has come a long way since Matrika Prasad Koirala’s premiership.

The panelists of the aforementioned talk show offered some interesting ideas at the closing:  Admit mistakes. Make friendly gestures towards Nepal. Show friendship with people of Nepal, including Pahades.  Ensure that there will never be a blockade again. Win the hearts and minds of Nepalis. India has made mistakes on Nepal and those mistakes need to be corrected.

This is wisdom but let me add something.

Nepal, nor its people, can afford to be anti-India. But they do not stay quiet when they see open Indian meddling. Let the constitution implementation process take its course. And do not expect Nepali actors to do everything you wish. Nepal and India are bound to remain on friendly terms. This may sound like a voice of UML to Delhi-wallahs. But ask any other Nepali leader, they will tell you the same.

As Nepal leans further toward China, not just politically, but also socially and economically, India may be left wondering why... Read More...