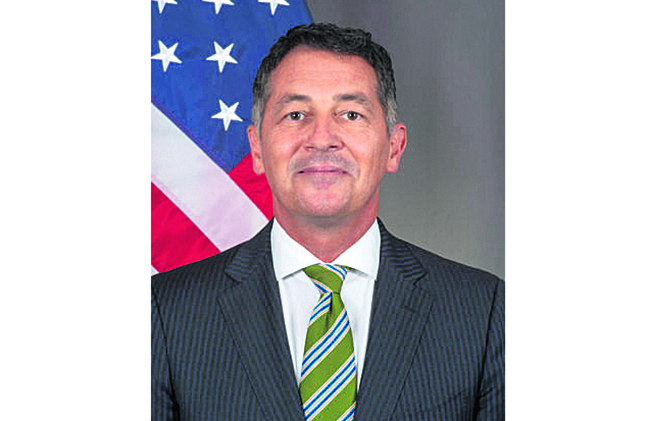 KATHMANDU, Sept 28: Expressing dissatisfaction over recent controversies surrounding some of the US-supported programs in Nepal, US ambassador to Nepal Randy Berry said that he is concerned over the risk of the seven-decade long Nepal-US partnership derailing due to ‘misinformation and suspicion’.

Addressing a talk program organized by the Institute for Strategic and Socio-Economic Research (ISSR) on US Foreign Policy in Nepal in the capital on Friday, Ambassador Berry said he is disappointed by ‘periodic suspicion about US motives from some corners in Nepal’, most recently in the discussions on Indo-Pacific Strategy.

Referring to the decision of the government to withhold ratification of MCC agreement through parliament amid differences among lawmakers within the ruling Nepal Communist Party (NCP), Berry said if Nepal’s leaders decide they want to say no to the US assistance it is Nepal’s sovereign decision to make. “It will, however, be an abrupt reversal of both the specific requests that the Nepal government has made of us and an abrupt reversal of the spirit of our partnership, the partnership that has benefited us both,” he said.

Ambassador Berry said he is concerned that the US-Nepal partnership could be harmed, bogged down by suspicion, and distracted by misinformation despite the long record of partnership and the evidences that demonstrate good faith.  “There are real, consequential decisions to be made and there are commitments to be honored, that have now been complicated by misinformation,” he further said.

Stating that Nepal and the US have worked together for many years in a consultative and transparent manner to design programs like MCC, the envoy said that pulling back from Nepal’s partnership with the US would harm both Nepal and US. “I humbly offer to you my belief that pulling back from Nepal’s partnership with the United States would be a loss for Nepal, for Nepalis, and for the United States as well. I believe it would not be in Nepal’s interest, not in keeping with Nepal’s historical values, including the principle of amity with all, enmity with none,” he said.

The ambassador’s remarks come at a time when a section of the ruling NCP lawmakers have argued that Nepal should not accept projects developed under the MCC, saying that that these projects are tied to Indo-Pacific Strategy. They have also asked for the rationale behind seeking India’s consent to develop cross-border transmission line being developed under MCC grant and ratifying the MCC agreement through the parliament.

While explaining that MCC grant was awarded on the basis of specific request from the Nepali side, Berry said that cross-border transmission line project was developed keeping in view the fact that there is no possibility to develop a resource like hydropower unless a country has a market that will pay for it.

“It is a simple fact of geography and economics that means India. And hopefully that will included Bangladesh, though, again, a simple fact of geography, if Nepal wants to sell power to Bangladesh, it will require an agreement with India,” he said, explaining the reasons for seeking agreement with India as precondition to implement the cross-border transmission line project.

The ambassador said although some people might prefer to find conspiracy hiding behind every door, the answer to this question is just simple geography and economics. “I have been asked why the MCC compact requires parliament’s ratification. The easy answer is that the MCC requires parliamentary ratification in every country where they operate. This is not special condition for Nepal,” the envoy further said.

Ambassador Berry also clarified that US military had extended support to Nepali security agencies on various issues including on humanitarian assistance, disaster response, military professionalism, and peacekeeping operation. Stating that they are currently working on a State Partnership Program, which is like a sister city program to build Nepal’s relationship with one of the state’s National Security Guard programs, at multiple requests from Nepali side, the envoy expressed concerns that the program also risks being derailed due to misinformation and suspicion.

The ambassador also clarified that the Indo-Pacific Strategy is the name they have given to the US policy toward Asia-Pacific region and that it describes what Americans strive to do to protect and advance a free, open and secure Indo-Pacific Region. “Some individuals claim there is some kind of secret motivation or that it is somehow exclusionary for the United States to call for a free, open and secure Indo-Pacific Region when, in fact, the US is engaging and promoting the same principles upon which our relationship was founded 70 years ago,” he added.

KATHMANDU, May 15: While trying to allay concerns raised from various quarters that Nepal was pushed into its Indo-Pacific strategy—a move... Read More...

I will try to fulfill my responsibilities with sincerity: Minister Jhankri
52 minutes ago

Violence against women sees spike in Suklaphanta Municipality
20 hours ago