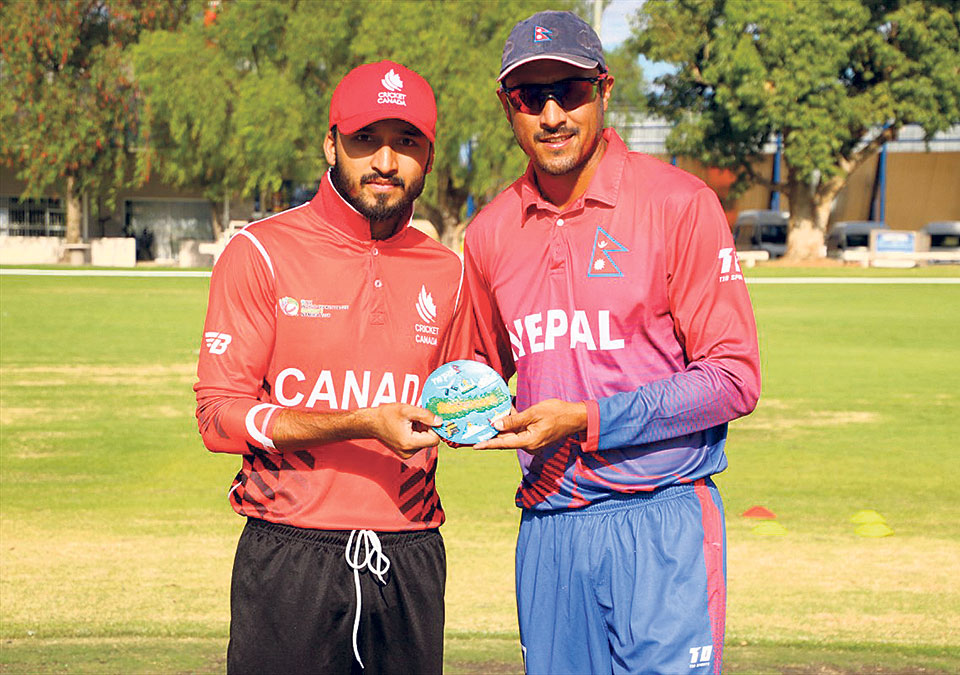 KATHMANDU, Feb 15: A sensational innings by all-rounder Karan KC, who smashed unbeaten 42 runs off 31 deliveries including three boundaries and four sixes, propelled Nepal to a win by a wicket against Canada in the final group match played at Windhoek, Namibia on Wednesday. KC shared an unbeaten partnership of 51 runs for the last wicket with last batsman Sandeep Lamichhane who stayed not out on five runs from 18 deliveries.

With the win against Canada, Nepal sealed its qualification for the ICC World Cup Qualifiers to be held in Zimbabwe in March. The final playoff match between Nepal and the second positioned the United Arab Emirates on Friday will decide the groups they will enter. The UAE defeated Namibia by 19 runs to seal their place earlier on the day.

Chasing the target of 195 runs, Nepal’s opening batsmen started the chase cautiously before the vice-captain Gyanendra Malla lost his wicket to a Cecil Pervez short delivery in the seventh over. The catch was completed by Canada Skipper Nitish Kumar at short mid-wicket. Malla scored nine runs including a six facing 25 deliveries.

Nepal was pushed into a crisis when Nepal skipper Paras Khadka was dismissed for a golden duck deceived by a short-pitched delivery by Pervez. Khadka top edged the mistimed pull as Ruvindu Gunasekera completed the catch at the short cover areas. Dipendra Singh Airee survived the hat-trick ball but was dropped on the individual score of one run by wicket-keeper Hamza Tariq.
A partnership of 50 runs dominated by Dilip Nath took Nepal’s total to 72/2 in 21.2 overs before getting caught behind by Tariq on his individual score of 41 runs in 68 deliveries including five boundaries.

Rain started to hover around the ground as Nepal was eight runs ahead in the D\L par score at the end of 21 overs. However, Nepal lost Nath, Dipendra Singh Airee and Sharad Vesawkar adding just nine runs in next three overs to see Nepal struggling at 81/5 at the end of 25th over. Nepal was 29 runs behind in the D/L par score. Nepal was 108 runs at the loss of five wickets and 10 runs behind the D\L target when the match was halted in the 34th over. Aarif Sheikh and Rohit Paudel were batting at the crease.

Nepal was languishing at 144 runs when the ninth wicket fell for Nepal. The leg-spinner Sandeep Lamichhane arrived at the crease with 51 more runs to get in remaining 47 deliveries. Lamichhane stayed unbeaten scoring five runs keeping 18 deliveries away being a perfect foil to support Karan at the other end. Karan started his boundary hitting barrage with a six against Cecil Pervez in the 47.4 over followed by two back to back boundaries against Dhindsa in the next over. Karan then put Nepal in a winning position smashing a six in the 49.5 over and picking up single in the last ball of the match to take Nepal to world cup qualifiers to be held in Zimbabwe in March.

Earlier, Nepal won the toss and invited Canada to bat first. Canada opening batsmen Srimantha Wijeratne and Ruvindu Gunasekera laid a good foundation of 46 runs at the end of first 10 overs. Nepal’s opening pace bowler Sompal Kami and Karan KC struggled to breakthrough in their opening spells. Veteran left-arm spinner Basant Regmi then removed the highest run-getter of the tournament Gunasekera to hand Nepal their first dismissal of the match. Rohit Kumar Paudel completed the catch for Nepal. He scored nine runs from 24 deliveries including a boundary.

Canada lost four wickets adding next 44 runs on the total. Skipper Nitish Kumar, Dhanuka Pathirana and Navneet Dhaliwal followed the opener with score being 90 runs in the 27th over with the loss of four wickets. The in-form leg-spinner Sandeep Lamichhane claimed the crucial wicket of Kumar when the batsman tried to dominate the bowler but mistimed his shot. Gyanendra Malla, fielding at his more natural place, took the regulation catch.

Kumar scored five runs without a boundary in 11 deliveries. Similarly, Pathirana was trapped LBW by Lamichhane for the score of two runs in 11 balls. Dhaliwal was drawn out of the crease by a delivery from Regmi getting him stumped out by wicket-keeper Nath. He struggled his way to four runs from 26 deliveries.

Wijeratne held the innings together from one end on his way to score his first century of the career. This is also first century in the ongoing league. He scored 103 runs including eight boundaries and remained not out facing 152 deliveries.

Wijeratne added 41 runs for the fifth wicket with Hamza Tariq, the current Trinbago Knight Riders player. Tariq targeted Lamichhane in his sixth over for two back to back sixes to unsettle the bowler. Lamichhane had to leave field due to injury after bowling five overs.

He went off field to get some treatment and resumed his bowling in the match after 22 minutes. He picked up two wickets in the match but conceded 33 runs in last four overs after injury to finish his nine overs in the match.

Vesawkar picked up a wicket and conceded 21 runs in his seven overs.

However, Wijeratne completed his century in last partnership of 33 runs with Satsimranjit Dhindsa who scored unbeaten 18 runs including a six. Canada scored 194 runs for the loss of eight wickets in 50 overs.