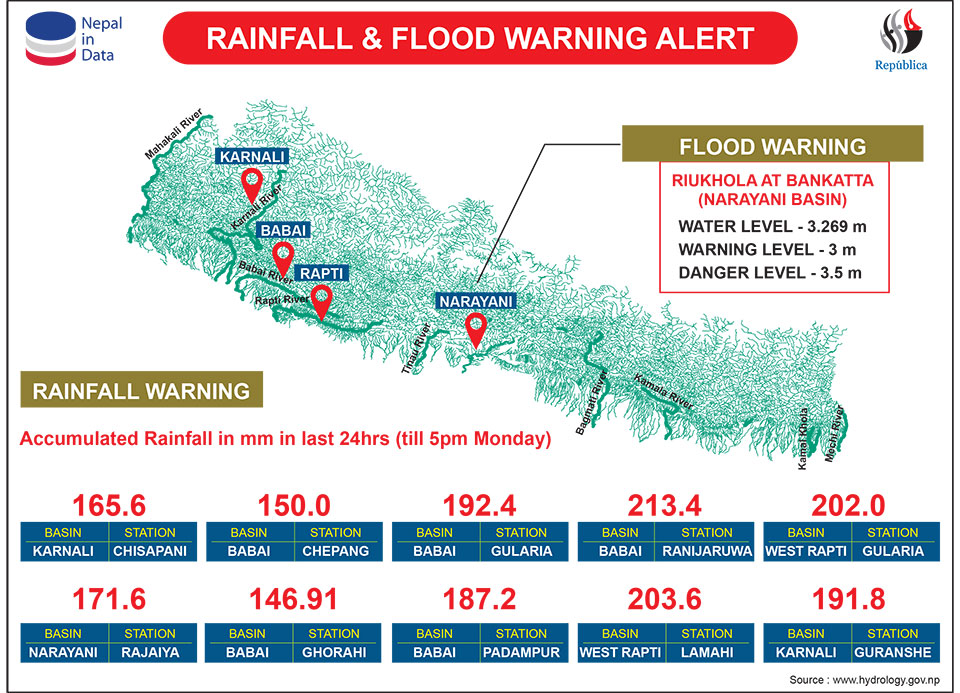 KATHMANDU, July 3: The Ministry of Energy, Water Resources and Irrigation has put all its bodies as well as locals in the risky areas on high alert after incessant rainfall that began on Monday increased high risks of landslides and flooding in various parts of the country, especially the western areas.

“After heavy rainfall across the country on Monday heightened the risk of flooding and landslides, we have put our local bodies on high alert and asked them to disseminate information of possible risks to the locals residing in the risky areas to avoid casualties and minimize damages to properties,” Energy Minister Barsaman Pun said.

The ministry on Monday organized a press conference to urge the general public to exercise caution to avoid possible risks triggered by the incessant rainfall.

According to the Department of Hydrology and Meteorology, the water-level of major rivers including Kankai, Koshi, Bagmati, Narayani, West Rapti, Babai, Karnali and Mahakali has reached the warning level. The department has also stated that the water level of small rivers passing through Chure range across the country is also likely to increase sharply by Tuesday, leading to flooding of the rivers. The department has stated that the rise in water-level in the rivers passing through Chure range is likely to cause flooding in districts like Jhapa, Morang, Sunsari, Udayapur, Saptari, Siraha, Sarlahi, Dhanusa, Mahottari, Rautahat, Nawalparasi, Kapilbastu, Rupandehi, Dang, Banke, Bardiya and Kailali.

However, the water level of rivers may gradually decrease from Wednesday.

According to him, the ministry has directed all its bodies located in the provincial as well as district levels not to leave their work stations for the next three months and disseminate up-to-date information about rainfall forecast and flood forecast to other concerned bodies and also the general public as soon as possible to minimize all sorts of losses and damages.

The approach of controlling floods and landslides is being carried out continuously, however gaps between research, government agencies, and local... Read More...

MUGU, June 12: The fear of being crushed by rocks and inundated by floods often gives sleepless nights to the police... Read More...