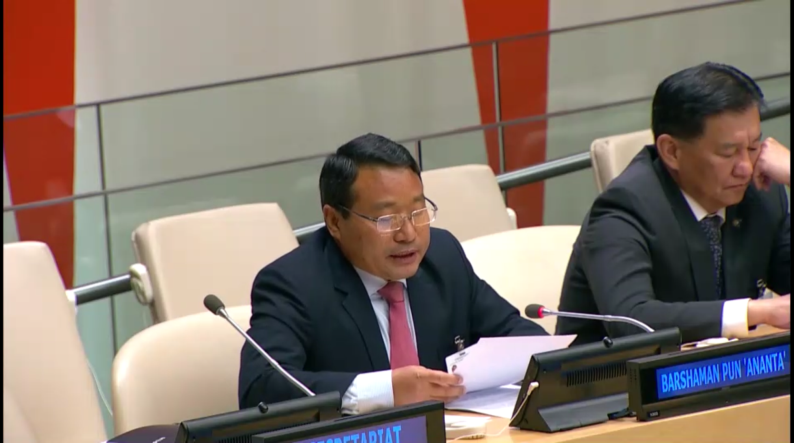 KATHMANDU, May 25: Minister for Energy, Water Resources and Irrigation, Barshaman Pun participated in the High-Level Dialogue on the implementation of the global plan of action of the United Nations Decade of Sustainable Energy for All (SE4ALL) 2014-2024: A Mid-point Review organized by the United Nations Department of Economic and Social Affairs (UN-DESA) in New York on Friday.

Addressing the event, Pun highlighted the importance of SE4ALL initiative and reiterated the commitment of the Government to ensuring reliable, affordable and modern energy for all, according to a press release issued by Nepal’s Permanent Mission to United Nations based in New York.

The minister also highlighted that Sustainable Development Goal 7 has an important cross-cutting dimension and fulfilling this goal would help achieve other important goals and targets including poverty reduction (Goal 1) and sustainable infrastructure (Goal 9).

The minister also shared that significant progress has been made in the areas of developing and mainstreaming hydropower as well as renewable energy projects with a view to reducing dependency on imported fossil fuels by replacing them with clean sources of energy.

Pun said that concerted efforts and enhanced international cooperation and commitments from all sides would play a crucial role in achieving affordable and clean energy.

During the meeting, the two sides exchanged views on implementing the 2030 Agenda for Sustainable Development and other aspects of Nepal-UN cooperation, including in energy, according to the press release.

The General Assembly declared the Decade of Sustainable Energy for All 2014-2024 by its resolution 67/215 in 2014 to underscore the importance of energy issues for sustainable development.

KATHMANDU, May 2: A special commemorative event was organized at the United Nations (UN) Headquarters  in New York on Tuesday... Read More...