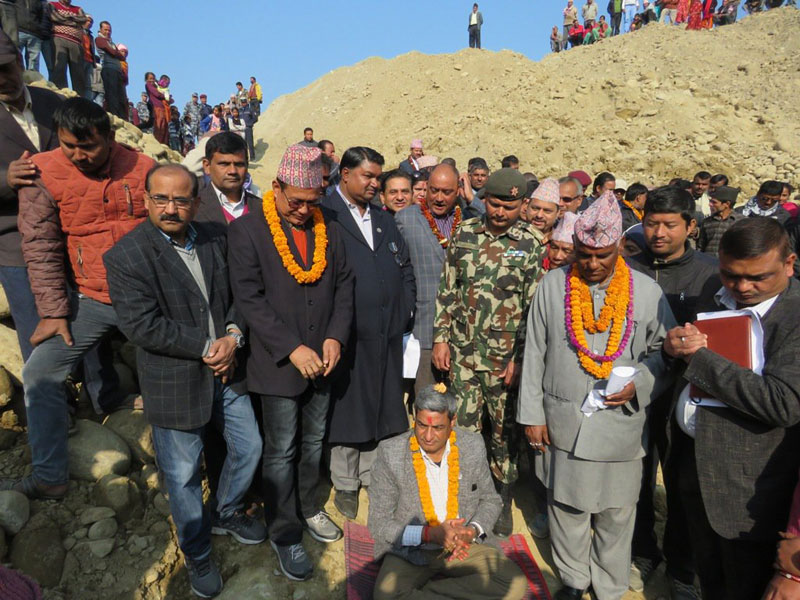 Development projects in the doldrums
KATHMANDU, Jan 14: The Ministry of Physical Infrastructure and Transport (MoPIT) has been able to spend less than 20 percent of the Rs 55.96 billion allocated for building roads and bridges in the first five months of the current fiscal year. But the minister for physical infrastructure and transport, Ramesh Lekhak, does not appear serious about expediting the roads and bridges projects, instead, he is busy making trips to lay foundations stones for roads and bridges in different districts, mostly in the tarai.

A compilation of the minister's travel schedule by Republica shows that Minister Lekhak made 16 trips to various districts in less than two weeks and four upcoming trips are to the western tarai for laying the foundation stones and inaugurating a few roads, and inaugurate the annual general meeting of a district chambers of commerce, which is unrelated to the ministry. On Monday alone, Lekhak laid foundation stones for five bridges in Rautahat.

There is a tendency among the contractors of several road and bridge projects receiving mobilization fund and going out of contact until toward the end of the fiscal year. Project management work related to the road and bridges of strategic importance within the MoPIT are in the doldrums. But Minister Lekhak is busy traveling to different districts and the purpose of his visit does not include any important task to resolve issues of projects under his ministry.

Officials at the MoPIT and Department of Roads say they have stopped accompanying the minister to the districts, saying that such trips have become almost regular events and have been hampering the routine works at the ministry.

Ministry officials said that the minister is busying himself in unrelated functions in the districts because he is more concerened about the upcoming elections than the ministry's development projects. "Lack of construction materials for roads and bridges projects has been an acute problem because the local bodies in various parts of the country have prohibited excavation and extraction of sand and aggregates. But the minister appears least bothered by the problem," said a ministry official requesting anonymity.

Instead of tracking down and punishing contractors who have violated the deadlines, Minister Lekhak is busy inaugurating projects awarded to "irresponsible contractors", ministry officials said. This week, he laid foundation stones for three bridges in Rautahat being constructed Pappu Construction Pvt Ltd, which is owned by Hari Narayan Prasad Rauniyar. The company has had a poor record in project works and tends to run away after receiving the mobilization money. The contractor has been blamed for delays in several projects, officials said.

Similarly, the travel expenses of secretaries and directors general are paid by the ministry. The minister's retinue normally comprises four to five members.

Repeated attempts to contact Minister Lekhak for this story on Friday was unsuccessful as he was busy laying foundation stone for the Kalaiya-Manmat-Matiarwa road in Bara during the day.

KATHMANDU, Aug 6: Minister for Physical Infrastructure and Transport, Ramesh Lekhak on Saturday said that the government has expedited the... Read More...

Half a dozen prime ministerial aspirants in NC
50 minutes ago