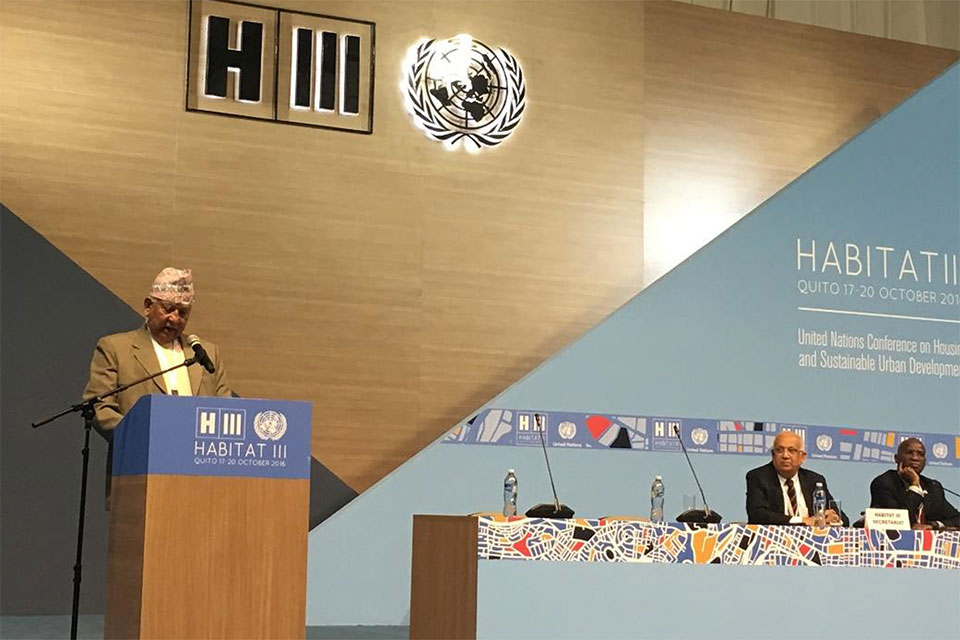 In his address, the Minister highlighted the commitment of the Government of Nepal to creating inclusive and sustainable cities through the implementation of Nepal’s Habitat III National Report which was published under the theme of “Inclusive Cities: Resilient Communities” in synergy with the New Urban Agenda and 2030 agenda for Sustainable Development, especially the SDG 11.

He expressed his confidence that the effective implementation of the Report, which was prepared through a wide consultation with relevant stakeholders, will help realize the objectives of the New Urban Agenda and ultimately contribute to sustainable development of Nepal, the Permanent Mission of Nepal to the United Nations, New York, stated in a press release.

Referring to the devastating earthquakes that struck Nepal in 2015 and Ecuador earlier this year, the Minister underscored the need to pay attention to disaster resilience which needed to be considered right from planning phase incorporating the principle of build-back-better. He also added that this idea builds into the ambitious reconstruction plan of Nepal.

Minister KC highlighted that the new Constitution of Nepal guarantees basic rights of housing, adding that there was progress in establishing a new urban governance structure at local, provincial and federal level. Minister concluded by laying focus on scaling up investments in sustainable and resilient settlements and on the importance of implementing the New Urban Agenda in full coherence and perfect synergy with the 2030 Agenda for Sustainable Development.

He also participated “Urban Dignity: Equal Access to Sanitation and Hygiene in Public Spaces”, a side-event organized by Water Supply and Sanitation Collaborative Council (WSSCC) in Quito in the afternoon same day. Speaking in the event, the Minister said that the new Constitution of Nepal guarantees water and sanitation, clean and healthy environment and housing as basic rights of all Nepali people.

Minister attended the Opening Ceremony of the Habitat III held at the Casa de la Cultura Ecuatoriana in Quito on October 17. Speaking in the Ceremony, Mr. Rafael Correa, President of Ecuador who chaired the Ceremony as President of the Conference; Ban Ki-moon, United Nations Secretary-General; Peter Thomson, President of the General Assembly; and Dr. Joan Clos, Secretary-General of the Conference each highlighted the importance of the Conference to reinvigorate the global commitment to sustainable urbanization, and also shared their belief that the New Urban Agenda would deliver its promise of inclusive and sustainable human settlements. The Ceremony was attended by many Heads of State/Governments, Vice-Presidents, Ministers, and representatives of member states; heads and representatives of various United Nations organs; representatives of the civil society, private sector, business community and other city actors.

The four-day Habitat III began here on October 17 and will conclude on 20 October 2016 by adopting “the New Urban Agenda” the text of which was finalized through intense intergovernmental negotiations, and its Quito Implementation Plan.

The New Urban Agenda envisions sustainable, inclusive and resilient societies through the implementation of the Agenda in synergy and coherence with the 2030 Agenda for Sustainable Development.

Minister KC arrived in Quito in the evening of 16 October to lead the Nepali delegation to the Third United Nations Conference on Housing and Sustainable Urban Development (Habitat III). RSS

Two–day conference on Integrating Knowledge and technology for sustainable development