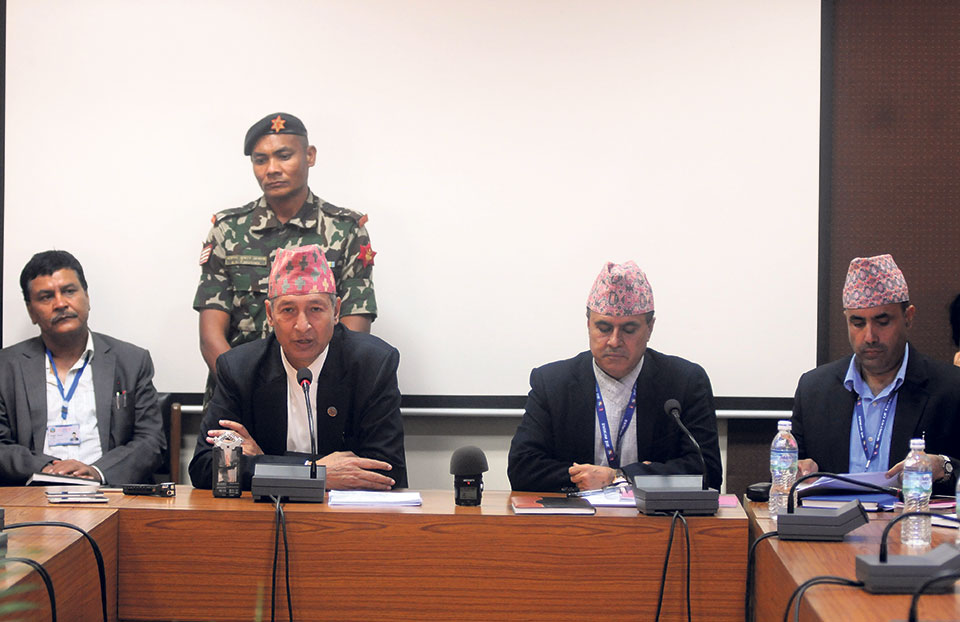 Minister for Finance Yuba Raj Khatiwada (left) speaks at an interaction held at the Ministry of Finance in Singha Durbar, Kathmandu, on Friday. Photo: Keshab Thokar/Republica

KATHMANDU, Aug 18: Minister for Finance Yuba Raj Khatiwada has tried to assuage growing fears among the public and private sectors about the rising tax burden in the new federal system.

Speaking at a press meet organized by the Ministry of Finance in Kathmandu on Friday, he said that double taxation and unjust tax burden would not be imposed on the people in the new federal system.

The minister’s statement to soothe the nerves of the public comes in the wake of public backlash against recent rise in tax rates in the course of adopting the federalism structure.

“There is an issue of double taxation, while there are also complaints from the public that the taxes are very high,” said Khatiwada. “The constitution has made it clear that there should not be double taxation and any tax that is divisible should be collected from a single jurisdiction that should to be deposited in a divisible fund.”

Minister Khatiwada also said the government was aware that exorbitant tax burden by any government on the public leads to adverse effect on the economy.

According to the minister, the government has created two committees to look into the recent tax issues. The first is a 3-member committee led by the secretary at Ministry of Federal Affairs and General Administration with finance secretary and secretary at Natural Resources and Fiscal Commission as members; which has been entrusted to provide a report to the government within 15 days on how to address the tax disputes between provinces and federal government until the commission gets full shape. The second is a committee formed by the Ministry of Finance, led by a joint secretary at the Revenue Division of the ministry, entrusted to look into the concerns of the private sector and the public about rising tax burden.

He, however, was quick to defend that the federal government was not responsible for the rise of tax burden for the public. “The central government has not raised any tax rate significantly. But, the federal finance minister has been blamed for any rise in the tax even at the local level,” he added.

It seems that news reports on haphazard taxation by local level governments in recent weeks ‘are exceptional cases’. According to Khatiwada, the constitution and subsequent laws have recognized different tiers of the government to collect various taxes.

“There is also a practice of exaggerating some exceptional case of unjust tax rise,” he said, referring to media reports about local governments imposing taxes on almost everything, from purchasing an egg to crossing the river.

“In the absence of elected local representatives for more than a decade, there was no adjustment in taxes levied by the local levels. So, review and adjustment of taxes at the interval of a long period may give an impression that the tax rate has been raised by huge margin,” he added.

He also warned against any attempt to discredit the federal system under the pretext of tax confusions. “If some anti-federalists think that this is the time to fish in the troubled waters, they are not going to be successful,” he said.

SAPTARI, Sept 3: Minister for Finance Dr Yubaraj Khatiwada has reaffirmed that the taxation in multi points would be ended... Read More...