Consider growing up in a household and surrounding where as a young person you must do nothing but excel in your studies because when you grow up, you have to become a salaryman with a good stable job. There is no time for “distractions” like art, music, sports or anything even remotely different from the definitions, theorems in books and the syllabus.

That was basically the life of Bijay Khadka—a business studies master’s holder—until, of course, he decided to take a three-month long graphic designing course. And now, after two years, everything in his life is different. 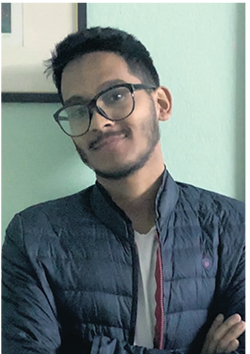 Khadka is the one behind the Instagram page (@i_kbijay) where you can see a wonderful array of minimalistic yet eccentric graphic illustrations, each with a different story to tell. After looking at these illustrations, you would be surprised to know that Khadka was never an artistic child and took up art only as an adult.

As a student, Khadka—who good at studies—was told by everyone around him to get into the commerce sector. He was repeatedly told “You must work in a bank, you have the capability and that’s where you will truly be successful” and as he identifies as an extreme introvert, he took it all in without a fuss. Fast forward a few years and he was completing his master’s, hoping he would land a job in a bank as soon as his studies were over.

But something—and he can’t tell just what—prompted him to take up a graphic designing course during his first year. “As I’ve always loved anything and everything related to IT, I became interested in graphic designing,” he says. Khadka found the digital medium to be very fluid and loved how he could play with colors while drawing and illustrating.

Slowly, his love for illustrating grew to an extent that he started feeling uneasy if he didn’t draw for a day. “Unlike other things, illustrating didn’t feel forced, it felt like an escape and I longed to do it every day,” he explains.

This, of course, didn’t sit well with his family, especially his brothers who wanted him to be fully focused on landing a job in a bank. “My parents, luckily, have always been supportive,” he says.

According to him, by limiting human features to recognizable shapes i.e without putting too much effort into the dimensions and texture of the human face and body, an illustration becomes more centered around the theme or idea that it’s trying to portray. For instance, if you want to make an illustration about a man’s relationship with nature, too much detail can make the illustration seem erratic. “Identifiable figures and stark colors will make the illustration look more pleasant while conveying its main idea more clearly,” says Khadka.

Khadka claims it took him two years to get to where he is today when it comes to his illustrating skills. “I had to learn the basics of art as an adult when most are already familiar with it since childhood,” he says adding that he has taken these two years (after finishing his master’s) off solely to get better at his craft so that he can make something out of it in the future.

Though he is more than happy doing graphic illustrations, when he sees his friends with jobs at popular banks and businesses, Khadka admits that he often feels left behind and ends up doubting his choice of career. “I come from a place where money is valued over anything and there is this conventional belief that art doesn’t make money which troubles me,” he confesses.

However, on the bright side, he has been getting recognition from fellow graphic artists and even has a few projects up his sleeve. Moreover, now that Khadka is getting offers from big companies like IME, even his brothers are finally warming up to the idea of him working as a graphic illustrator.

In the future, rather than making art for art’s sake, Khadka hopes to put his illustrations into a more functional use, for instance by creating an app or designing a product. “Rather than hanging my illustrations up at an exhibition, I want it to be useful and interactive,” he says.

Khadka admits that he finds art to be just as challenging and difficult as any mathematics formulas or business concepts, perhaps even more so. “But despite the recurring insecurities and challenges, I’m always out there trying to hone my skills and give it my best,” he concludes.

You have heard about minimalism and like the concept but don’t know where to start? Apparently, living a minimalist life... Read More...