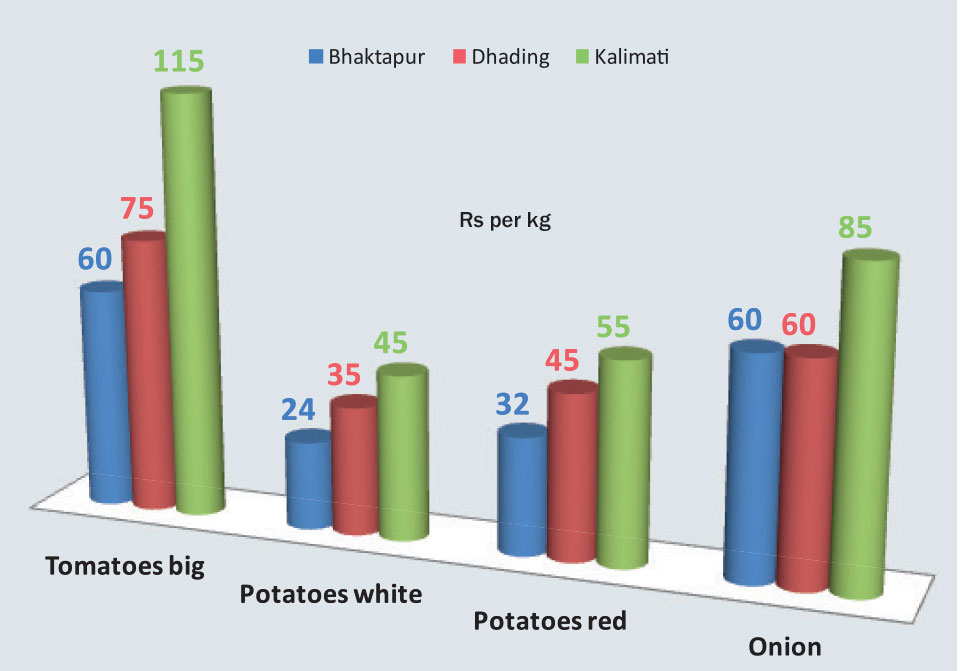 Similar is the case in Dhading. Big tomatoes fetch an average price of Rs 75 per kilo for Dhading farmers while the same tomatoes are sold at Rs 115 per kilo in Kalimati.
The retail price in Kathmandu and the price farmers are paid in Bhaktapur differ by Rs 25 per kilo of onion while the price of white potato varies by Rs 21.

The yawning gap is  also similar between the prices of these vegetable items in Dhading and Kathmandu.  Bhaktapur and Dhading are the two districts supplying vegetables in bulk to  urban centers like Kathmandu. Farmers in both districts said that they are paid far lower than the prices in Kathmandu   due to the middlemen  in the supply chain. While consumers are charged exorbitantly, farmers get a meager price for the veggies they produce. It's the middlemen who benefit at the expense of both farmers and consumers. Farmers and consumers both lament the government's reluctance to intervene in the market distortion.

“Middlemen come to our fields to buy up our vegetables. We  sell at prices similar to those before the price hikes  at Kalimati,” said Sanjiv Dulal, a farmer in Changunarayan Municipality, Bhaktapur. “Farmers are not getting their proper share in the supply chain if we compare the selling prices for farmers with  prices in the retail market.”
“Middlemen are overcharging but the government has not cared about monitoring,” said Ganesh Ram Suwal, president of Progressive Agricultural Municipality Committee, Bhaktapur, a local farmers' group. “Farmers are not behind the price hike for vegetables. It's the middlemen,” added Suwal.

However, wholesalers at Kalimati believe that both middlemen and the Kalimati Fruit and Vegetables Development Board (KFVMDB) are behind the artificially high vegetable prices. They further believe that government neglect and the resulting  low output also eventually result in higher prices.

“From five to seven middlemen are involved in the supply chain between farmers and wholesalers,” said Hemantalal Shrestha, a wholesaler at Kalimati: “This is because KFVMDB has failed to act as a bridge between  farmers and the wholesale market, and the market monitoring authorities for their part have not been able to control the middlemen.” Shrestha further added, “Consumers should not blame traders for the high prices. We  earn just a small margin.”

“Policies for market management are also lacking from the government side,” another wholesaler in the market, Ramsharan Upreti, said: “Low production is likewise a cause of the price hikes, but it is the government that is responsible for low production. Output is  low due to the negligence of the government in providing fertilizers to the farmers.”

Officials of the Department of Supplies and Protection of Consumer Interests (DoSMPCI), the government body  responsible for market monitoring, accepts the involvement of middlemen in the vegetable business. However, they say that they alone cannot correct the price rises. “We are not the only authority responsible for controlling the price hike,” said Laxman Shrestha, a director of DoSMPCI. “The Prime Minister's Office has directed the Department of Agriculture to do the needful while we also are in the process of carrying out price analysis based on farmers' investments.”

“Laws in Nepal have not fixed the number of layers in the supply chain, which is causing a problem in controlling middlemen.” Shrestha added.

Economists also share the sentiment of  farmers and retailers. “Middlemen seem to have been taking advantage of the low frequency of inspections due to the recent festivals and the upcoming elections,” said Chandramani Adhikari, an economist. “However, low production is also a reason  for the higher  prices in recent days.”

Tech giant Apple is set to raise the prices of its apps in Britain by around 25 percent after the... Read More...