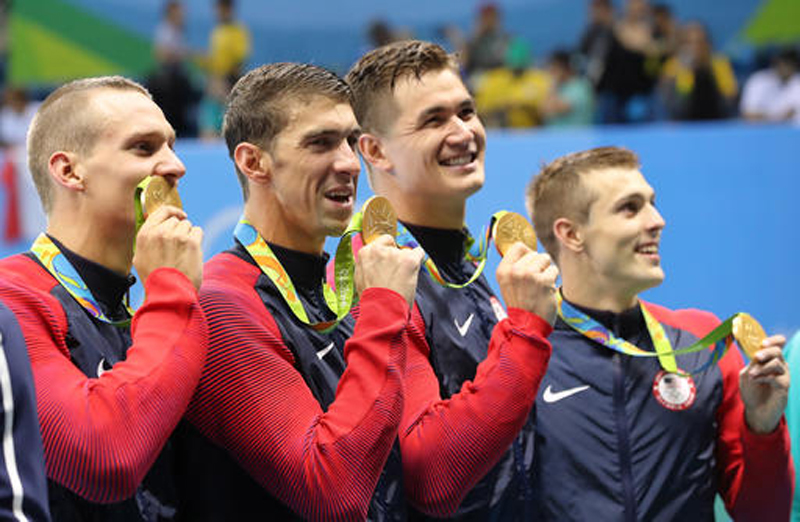 The United States team from left, Caeleb Dressel, Michael Phelps, Nathan Adrian and Ryan Held celebrate after winning the gold medal in the men's 4x100-meter freestyle relay during the swimming competitions at the 2016 Summer Olympics, Monday.

RIO DE JANEIRO, Aug 14:  Michael Phelps closed out the Rio Olympics in the only way imaginable.

Phelps put the United States ahead to stay on the butterfly leg and Nathan Adrian finished it off, giving the most decorated athlete in Olympic history his 23rd career gold medal.

If that was the end, and Phelps insists it is, what a way to go.

Phelps said that Saturday was how he wanted to finish his career.

"This is how I wanted to finish my career," Phelps said. "Getting off the bus walking into the pool tonight, I pretty much felt myself starting to cry. Last time putting on a suit. Last time walking out in front of thousands of people representing my country."

As Adrian touched the wall to finish off the victory, Phelps gathered the other relay swimmers, Ryan Murphy and Cody Miller, in his arms. One night after his only setback in Rio, an upset loss to Joseph Schooling in the 100 fly, Phelps was back on top.

In the stands, his fiancee, Nicole Johnson, bounced along to the music with their son, 3-month-old Boomer, cradled in her arms.

Phelps is eager to spend a lot more time with them. He plans to marry Johnson after the Olympics and said he wants to watch his son grow, maybe even dole out a swimming lesson or two.

Most of the U.S. swim team was in the stands to watch Phelps' finale, including the biggest female star of the games, Katie Ledecky.

The 19-year-old Ledecky joked that she was proud to be part of Phelps' final Olympics — twice. He initially retired after the 2012 London Olympics, only to decide about a year later to return to the pool.

The comeback endured a huge setback with his second drunken-driving arrest in 2014, which led toPhelps being banned from the world championships the following year. But it also sparked a turnaround in his life. He entered six weeks of inpatient therapy, where he got in touch with some of the issues that seemed to lead him astray outside the pool.

He quit drinking, reconnected with his estranged father, got engaged, moved to Arizona with his longtime coach Bob Bowman, and became a father.

At 31, he sounds much more adamant when he says his swimming career really is over.

He would finish his career with 28 medals overall, having won five golds and a silver at these games.

The 22nd Gold for Michael Phelps!

For Michael Phelps, 6 gold medals seem very much in reach

RIO DE JANEIRO, Aug 8: When Michael Phelps arrived in Rio as a 31-year-old swimmer who retired once and endured... Read More...