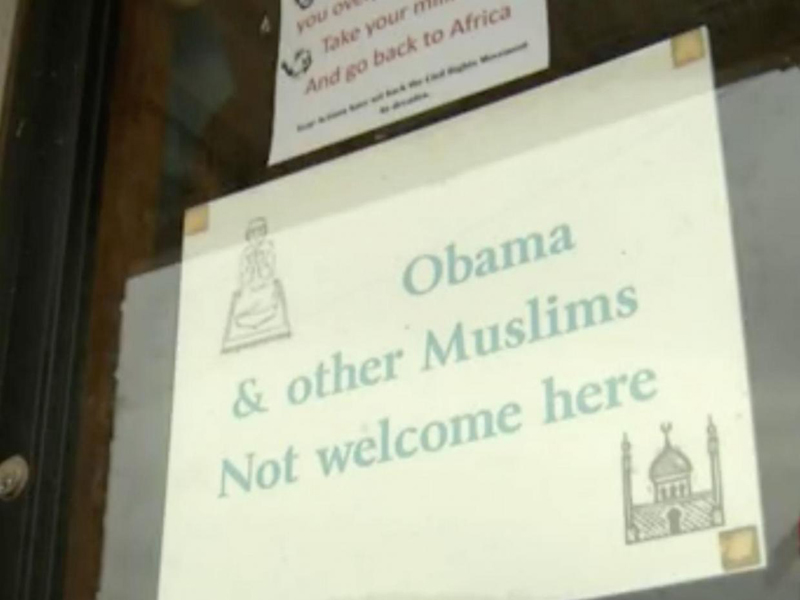 The Mayhill Convenience Store has reportedly displayed these signs for years and has even sold them to customers.

One of the signs reads “Kill Obama” and another says “Obama & other Muslims not welcome here.” The posters also include racially-tinged epithets with one reading “2012 No Re-nig.”

Marlon McWilliams, the former store employee, told KOB 4 that the signs have been there for a long time. He added that the owner also sells toilet paper with Obama’s face on it.

Another sign aimed at NFL player Colin Kaepernick, who protested at police brutality against black people, called him an “overpaid half-breed” and asked him to go back to Africa.

“If you go in there and offend him, you can’t go back again. He turns a lot of people away,” McWilliams added. Some of the signs, including the ones that said “all lives natter”, were offensive and no longer went into the shop.

Social media users have been criticising the racist posters but no one has made a complaint. Community members have urged others to write negative reviews for the store.

One Facebook user wrote a review for the store’s Facebook page saying that the owner does not have the right to discriminate against people in the name of free speech.

The Council on American-Islamic Relations (CAIR), the largest Muslim civil rights advocacy group, issued a statement on Saturday based on the offensive signs. “While everyone has the right to free speech, we urge the store’s owner to remove the sign in the interest of our nation’s unity at a time of increasing divisions,” said Ibrahim Hooper, national communications director of CAIR.

CAIR added that there were more than 900 anti-Muslim incidents in the month after Donald Trump was elected, including Muslim women being targeted and mosques being threatened.

French auction house Millon denied accusations by the Mexican government that a sale of dozens of pre-Columbian artifacts was illegal... Read More...

WASHINGTON, Jan 20 : In a bid to break the shutdown stalemate, President Donald Trump on Saturday offered to extend... Read More...