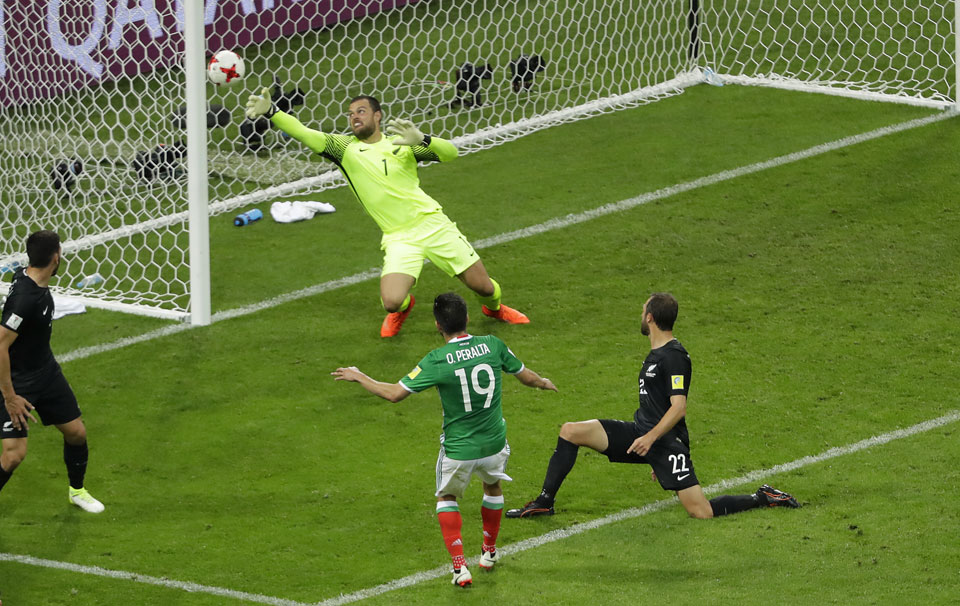 SOCHI, June 22:  Mexico asserted its superiority in the second half against New Zealand to avoid a Confederations Cup embarrassment on Wednesday, coming from behind to win a fiery Group A encounter 2-1 that ended in a brawl.

The on-pitch fracas involved so many players that the referee had to go to touchline to assess the skirmishes on a screen, rather than just relying on video replay assistants.

"It was intense, it was competitive," New Zealand coach Anthony Hudson said after the game that was settled by Oribe Peralta's 72nd-minute strike for Mexico.

"If I was a big team in world football and we were taken right to the edge by a smaller team like New Zealand there's a certain amount of discomfort there and big pressure. So I would imagine that's part of (the incident)."

Three players were eventually booked for their involvement in the second flashpoint of the game in the south Russian resort city of Sochi where Mexico made eight changes from the side that drew with Portugal.

Tensions erupted in the first half when Mexico coach Juan Carlos Osorio swore at the New Zealand coaching staff over an injury to Carlos Salcedo that medics later determined would rule the defender out of the rest of the tournament.

Salcedo injured his shoulder while falling in an off-the-ball tangle with Chris Wood, who angered the Mexicans by shooting while his opponent was incapacitated on the turf.

"I apologize, my words were wrong," Osorio said through a translator of the incident captured on the official broadcast feed. "Our players and myself were shouting to stop the game but there was no reaction on the side.

"The game was really rough and violent. That's unacceptable and why I lost my temper. I felt very offended and I had some insults in my direction in Spanish. It's true that the camera shows some things I said but (New Zealand's) assistant coach is responsible for what happened."

After Salcedo was carried off on a stretcher, Wood went on to put New Zealand into a surprise lead in the 42nd minute. New Zealand's hopes of a first-ever victory in its fourth appearance at the World Cup warm-up tournament were thwarted nine minutes into the second half. Javier Aquino and Marco Fabian combined to set up Raul Jimenez to strike on the turn into the top corner.

"We took them to the very limit," Hudson said after his team was eliminated with a game remaining in Group A, "and at times they couldn't handle that."

SAMARA, July 2: Brazil roared in the World Cup quarter-finals with a 2-0 victory over Mexico on Monday as Neymar shone... Read More...