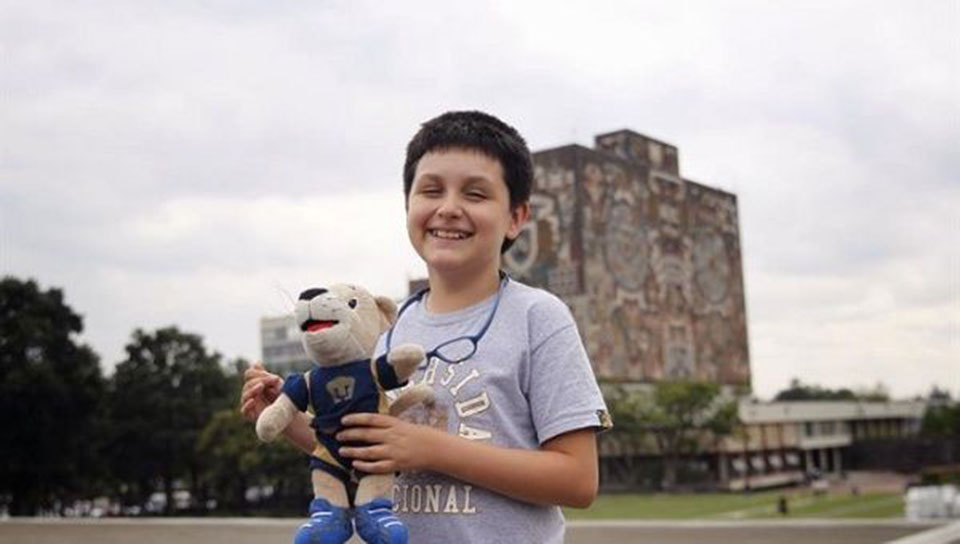 MEXICO CITY, Aug 5: Carlos Antonio Santamaria Diaz may be only 12 years old, but he has already enrolled in the National Autonomous University of Mexico (UNAM) and will begin his biomedical physics studies on Monday.The child prodigy earned his place in Mexico's most prestigious university after getting 105 points out of 109 in his admission test, becoming the youngest person to study a professional degree in the institution.

It seems Carlos was destined to do so: in 2015, shortly before his ninth birthday, he took two diploma courses in the Chemistry Faculty; one on biochemistry and molecular biology for the pharmaceutical industry, and another on analytical chemistry.

"It's the dream of three or four years; the 'half dream' we wanted to accomplish, just like finishing middle school, high school.. It feels good having accomplished this," Carlos told a press conference at the university, adding he picked UNAM because that's where it all started.

Carlos said the biggest challenge wasn't the admission test (even though he says it was difficult because he still doesn't know a lot about integers), but the fact his parents had to convince institutions to let him take his middle- and high-school tests at a very early age.

His father, Fabian Santamaria, said the education secretary let Carlos complete the adult tests because there's currently no such thing designed for children."I just want to study. If they close the doors to me, I'll come in by the windows," Carlos said.

His family lives close to UNAM's Genomic Sciences Center in Cuernavaca, near Mexico City, where he had already taken courses. He has also studied in the Institute for Research on Materials and taken other courses online.

Carlos said he already has several academic projects underway in biochemistry, including reconstructing a cell and curing diseases.

The program of his choice, biomedical physics, aims to train professionals in physics and mathematics applied in medicine and biology.

Asked about the secret to his accomplishments, Carlos replied: "Studying a lot, never say 'It can't be done' or 'I'll return to elementary school.' There's always a way to get in."

Carlos said he would like to help more children like him to do what they can't in elementary or middle school, and show them how to continue their studies.

Mexico to help create 20,000 jobs in Honduras to curb migration

Seven mine workers missing after accident in northern Mexico

MEXICO CITY, June 7: Rescuers were searching on Wednesday for seven workers who went missing in at a gold and silver... Read More...