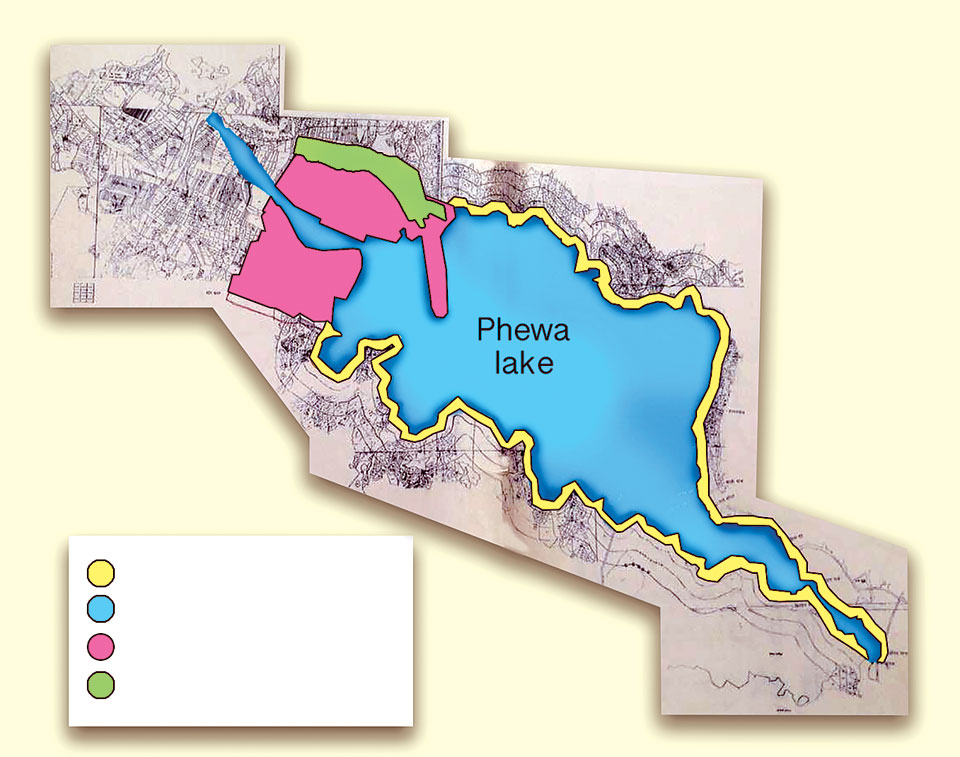 Fewa Lake Conservation Project under the metropolis has started collecting details of the illegal structures after Republica daily ran stories about illegal encroachment of Fewa lake.

The move of Pokhara-Lekhanath Metropolitan City comes in the wake of the Commission for the Investigation of Abuse of Authority (CIAA) showing concern over the encroachment of Fewa lake. The anti-graft body has sought details of encroached land from Pokhara-Lekhanath Metropolitan City, District Survey Office and District Land Revenue Office of Kaski for further investigation.

Chief engineer of Fewa Lake Conservation Project Mahendra Bahadur Godar said they are currently collecting details of illegal structures built on the banks of the Fewa lake. “We had already been collecting information about illegal huts and cottages. We have received request from the CIAA to provide those details,” he said. “This may take us two more weeks.”

Godar said they are collecting details of those holding private ownership of land on the bank of Fewa lake.

Chairman of Pokhara Chamber of Commerce and Industries Ananda Raj Mulmi argues that it is important to save Fewa lake to keep the beauty of Pokhara intact. He argued that the local government must act to stop exploitation of the Fewa lake.

Although there is a rule to restrict building any houses that are more than 24 feet high, a large number of tall buildings are being constructed in the lakeside. It is estimated that over 500 houses are built illegally.

Pokharal-Lekhanath metropolis has restricted building any structures within 65 meters of the Fewa lake. Although a large number of structures are built in the restricted areas without map and permission, concerned authorities and stakeholders have remained mute spectators to it.

Earlier, Pokhara-Lekhanath Metropolitan City had written to the Ministry of Federal Affairs and Local Development (MoFALD) that those building illegal structures are now demanding compensation to relocate themselves to other places. The metropolis had even asked the National Planning Commission in writing to help arrange necessary budget to provide them compensation.

Various reports have shown that the total area of Fewa lake has been decreasing every year due to rampant illegal construction in the lakeside areas. Keeping this in view, the metropolis formed the Fewa Lake Conservation and Management Office on January 3, 2015.

Although the metropolis had allocated budget since 2015 to demarcate the land encroached mostly by hoteliers, it could not expedite the work as a case on this issue is currently sub judice at the Supreme Court.

People of high social standing are in the forefront in illegally encroaching on Fewa lake.

According to the report submitted by a committee formed by then Prime Minister Baburam Bhattarai to probe into the encroachment of Fewa lake, advocate of Positive Thinking Karna Shakya, Hotel entrepreneur Piyush Bahadur Amatya, medical doctor Jagadish Lal Baidya are among those named as encroachers of the Fewa lake.

KATHMANDU, August 11: The issue of Fewa Lake encroachment has entered the parliament on Friday. ... Read More...