MeToo takes off in South Korea, but justice harder to attain 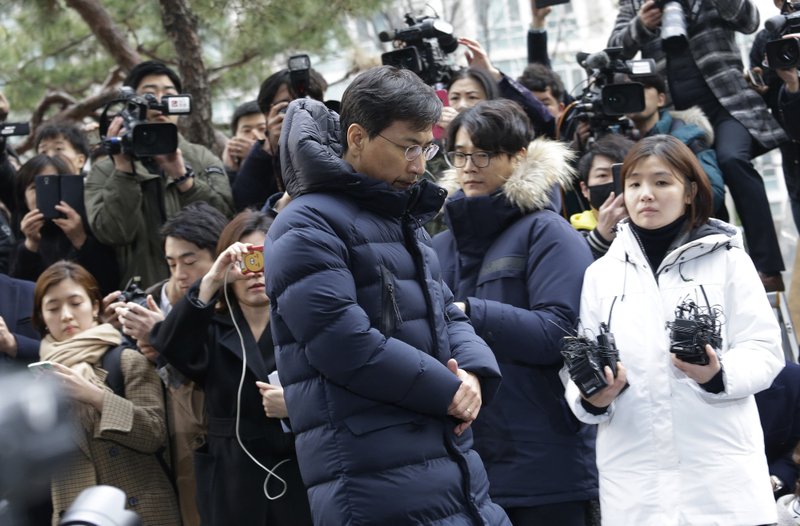 FILE - In this March 9, 2018, file photo, former South Chungcheong Province Gov. Ahn Hee-jung, center, a former presidential contender whose secretary accused him of rape, arrives at the Seoul Western District Prosecutors’ Office in Seoul, South Korea. In patriarchal South Korea, the MeToo movement has taken off with unexpected rapidity, toppling male celebrities including a prominent politician. While allegations of sexual abuse began to take toll on reputation of men in power, whether the victims will be able to seek justice and transform the conservative and patriarchal society hinges on changing male-centered views in judicial system and workplaces. (AP Photo/Ahn Young-joon. File)

SEOUL, March 22: The #MeToo movement has taken off with surprising rapidity in South Korea, toppling male celebrities and a prominent politician in a country where men have long brushed off sexual misconduct allegations and continued with their careers.

How far will it go?

South Korea largely remains a deeply conservative and patriarchal society rampant with sexism both casual and overt. It has the largest gender pay gap among developed countries and ranks 118th out of 144 nations in the World Economic Forum’s global gender gap index, the lowest among the G-20 members.

While human rights and other progressive movements have slowly picked up pace in recent years and peaceful protests in 2016-2017 ousted the president, it wasn’t until women here started saying #MeToo that many realized women had been overlooked.

“There are high expectations that the MeToo movement is bringing changes to South Korean society,” said Kim Bo-hwa, a researcher at Woolim, a research center under the nonprofit Korea Sexual Violence Relief Center. “But whether speaking out would continue depends on how society, the judiciary and the government respond.”

Day by day, the list of South Korean women who speak out is growing, and so is the list of men who have stepped down from positions of power.

The fallen include prominent Gov. Ahn Hee-jung, a former presidential contender whose secretary accused him of rape. The works of poet Ko Un, seen as South Korea’s Nobel Prize hopeful, will be erased from textbooks after accusations of lewd acts in public and sexually harassing younger poets. Kim Ki-duk, a Golden Lion winner at the Venice Film Festival, may not be able to release his new movie as anger mounts after actresses spoke out about alleged and attempted rapes.

Like elsewhere, the movement is not without backlash. Some have questioned the victims for not doing more to stop attempted rapes and called the movement “man-hate” or a witch hunt. In a society that values conformity over individuality, the victims have been accused of hurting their industry’s reputation.

A popular political commentator, Kim Ou-joon, said there are people trying to use the MeToo movement to cover up other issues, a claim that gained big traction among fans of his podcast and huge backlash from MeToo supporters.

It all started in January when a female prosecutor went on TV to say that she had been mistreated and reassigned to a remote office after she reported being groped by a senior male prosecutor at a funeral eight years ago. Seo Ji-hyun said she was inspired by the MeToo movement in the West.

Other women followed suit, and people began to listen. At workplaces and schools, more people are beginning to say no to behaviors that were left unquestioned and calls for teaching feminism are growing.

Byeon Ye Jin, a 17-year-old student who calls herself a teenage feminist, said the MeToo movement gave her courage to talk about being groped by an acquaintance when she was a child.

“I could not tell my parents, I didn’t have a place to seek help and I couldn’t even name the case. But with the MeToo movement, I felt that I should have courage to speak out instead of enduring and ignoring the pain I suffered,” she told a group of women on International Women’s Day. “It took me eight years to speak.”

Calls from rape victims to the Korea Women’s Hot Line, a civic group that helps victims of rape or domestic violence, jumped 24 percent in the month since Seo’s went public in a TV interview.

Those who go to court, though, face a legal system heavily influenced by male-centered views.

A report released in January by an association of civic centers that battles sexual violence cites examples of a prosecutor who told a sexual violence victim that many women say no when they mean yes, and a judge who dismissed a rape charge because the victim did not seek help from her father in the next room and drank tea with the defendant, a relative, after the attack. The report said the victim was worried about her father’s illness and felt ashamed to tell her family on the day of her sister’s wedding. The dismissal was later overturned, and the defendant convicted.

South Korean law defines the lack of consent based on how much the victim resisted and the degree of threats and force. The onus of proving threats or force is put on victims, who have to demonstrate how they resisted or explain why they could not resist more.

“There are court cases where unclear rejection by victims was seen as giving consent,” said attorney Wee Eun Jin. “Some court cases say a victim gave consent because she was seen smiling while entering a love hotel or she paid the hotel charge. Sometimes unless the victims suffer serious injuries, they are not seen as resisting sexual advances.”

Legal experts and activists say the legal definition lacks an understanding that most sexual violence happens not between strangers but between people who already know each other, in workplaces or schools and often with those in hierarchical positions.

Kim Ji-eun, the secretary who accused the former governor of repeated rapes, said in a live TV interview she did her best to express her objection to Ahn, someone that she usually never dared to say no to: “I don’t say no during work, so when I showed hesitancy and said it’s difficult, it was the utmost defense I could play.”

Ahn denied the allegations, also including a rape complaint by another woman, telling reporters Monday that he thought the relationships were consensual.

Activists are launching a campaign to stop asking victims why they did not say no. Instead, they are calling for asking offenders how they sought consent.

Park Hyun-taek, a senior official at the Justice Ministry, said that more public consensus is needed on penalizing sexual violence outside the legal definition of rape before revising the law.

The big challenge facing women who speak out is whether they will be able to continue their careers.

Actresses who accused former National Theater Director Lee Yoon-taek of decades of sexual assaults are facing discrimination and prejudice in the theater community, one of the accusers said.

Some offices have sidelined the victims instead of pursuing the accused.

A Renault Samsung Motors employee fought more than four years in court to win a case of company mistreatment after she reported sexual harassment by her male manager.

At the end of 2017, the Supreme Court ordered the company to compensate for what appeared to be revenge against the woman. The court also said that lowering the salary of a colleague who helped the victim was illegal. Advocacy groups said the case helped pave a way to establish a system to protect victims and those who help victims in the workplace.

The labor ministry said it would enable workers to send anonymous complaints on workplace sexual misconduct and consider criminally punishing employers who do not take actions against offenders.

South Korean President Moon Jae-in joined the growing MeToo movement last month and urged a thorough investigation into the sexual violence claims, but some question if his actions match his words.

Moon, who promised to be the feminist president during his campaign, has been criticized for ignoring calls to fire close associate Tak Hyun-min, an event planner in his office and the author of books that portray women as sex objects.