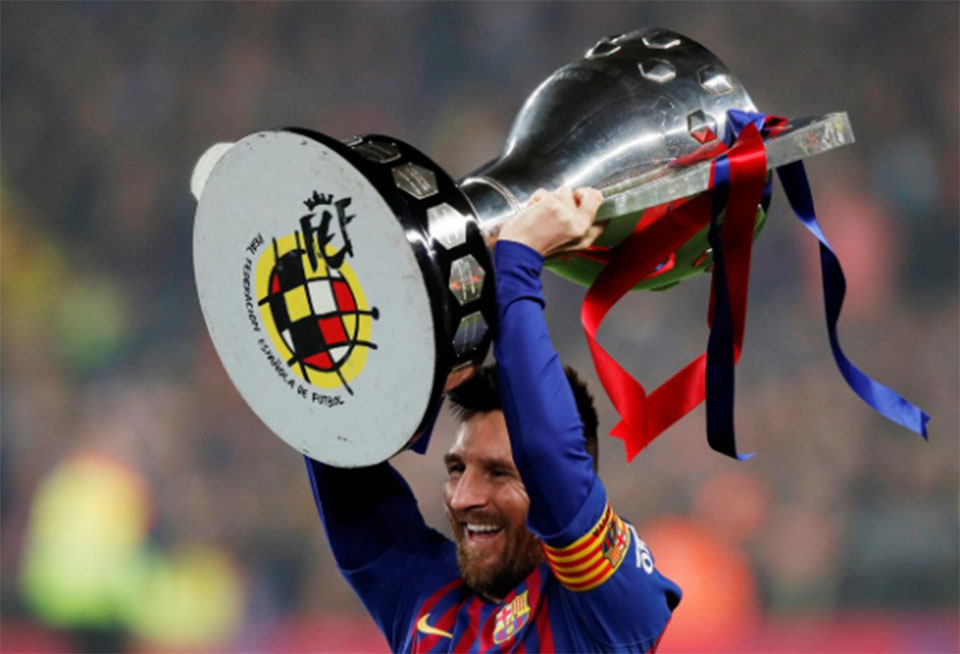 BARCELONA, April 28: Lionel Messi fittingly sealed Barcelona’s 26th La Liga title on Saturday by coming off the bench to score the goal in a 1-0 win over Levante in front of a jubilant Nou Camp crowd, who celebrated a remarkable eighth league crown in 11 years.

Barca’s captain decided the game and the title in the 61st minute as he received a header from Arturo Vidal, effortlessly freeing himself from two defenders with his right foot before using his left to plant the ball into the far bottom corner.

He had started on the bench along with Sergio Busquets as Ernesto Valverde had one eye on Wednesday’s Champions League semi-final first leg at home to Liverpool.

But the coach inevitably turned to his talisman with the game goalless at halftime, despite the best efforts of Philippe Coutinho, who had numerous attempts on goal and clanged the crossbar before being withdrawn for Messi.

The Argentine needed just over a quarter of an hour to have the desired effect, lighting up the stadium with his 34th league goal of the season in 32 appearances.

With 13 assists to his name as well he has his footprints on more than half his side’s 86 goals.

“Messi was always ready to come on and I always knew he was going to play but we also have a game on Wednesday. He has to stay active and he scores goals everywhere he goes and he has won us this title,” Valverde told reporters.

“It is very difficult to win this title, without the amount of teams we are competing with, especially with this margin.

“We have done it two years in a row and it’s fantastic to see the fans celebrate the title like this at home. Now we want to go and celebrate it.”

Cries of “champions” rang out from the 91,000 supporters crammed into the Nou Camp but Barca’s players dropped their concentration and Jose Luis Morales should have levelled for the visitors but blasted over the bar.

NARROW ADVANTAGE
Levante also hit the post in the final stages as Barca were left clinging on to their narrow advantage deep into stoppage-time but relief came when they cleared a corner and the final whistle sounded.

“They turned us upside down and I think that was down to nerves. They had a few chances but it was incredible when they hit the post,” Valverde added.

“We couldn’t kill the game off and they started to believe while we get more nervous but luckily we were able to see out the win.”

Messi, who became the first player to win 10 La Liga crowns with Barca and only the third player from any club to do so, hoisted the trophy into the sky before joining his team mates and their children on a lap of honour.

“Eight out of 11 titles will be very difficult to repeat because La Liga is so difficult, it has the best teams, the ones that are always fighting for European trophies so what we have done is historic,” said midfielder Busquets.

Barca lead the standings on 83 points after 35 games, an unassailable nine clear of second-placed Atletico Madrid with three matches left because they have a superior head-to-head record this season.

Valverde’s side have now taken the first step in their bid to win a third treble in a decade.

After their Champions League semi-final against Liverpool when they will be bidding to reach the final of Europe’s premier club competition for the first time since 2015, Barcelona play Valencia in the Copa del Rey final on May 25.

“The players and the fans should enjoy this night without going over the top,” added Ivan Rakitic.

“When we wake up tomorrow we have to prepare for what comes next, we have to think about Liverpool, who have an incredible team and a brilliant coach.”