Messi returns with double but Barca lose at home to Betis 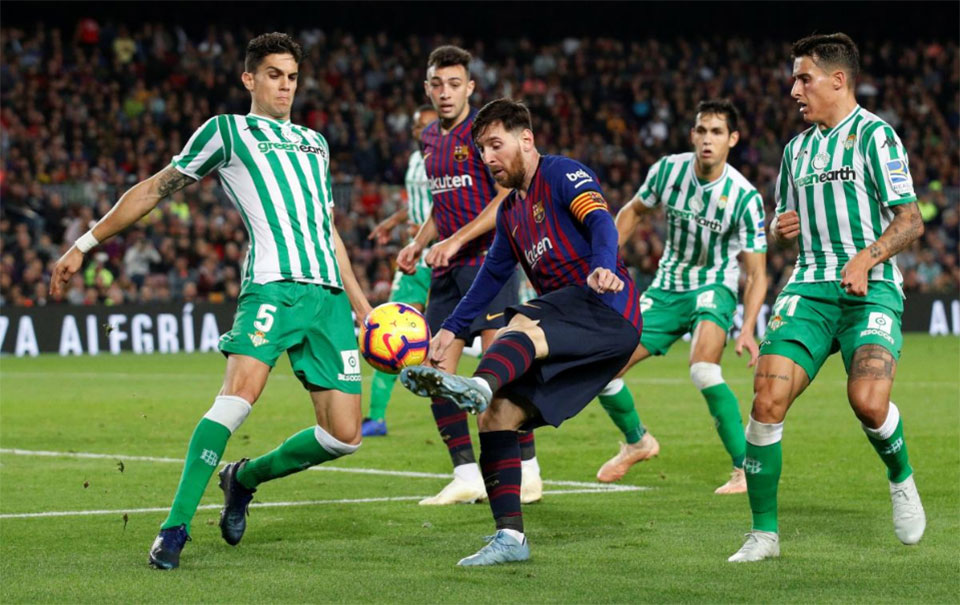 BARCELONA, Nov 12: Lionel Messi scored twice on his eagerly-awaited return but La Liga leaders Barcelona were still left shell-shocked by a scintillating Real Betis side, who beat them at their own game of possession football to win 4-3 at the Nou Camp on Sunday.

The club from Seville began the match in 16th place but produced an irresistible performance in becoming the first team to win at Barca’s home in any competition since 2016 and the first to score four goals there in 15 years.

Barca’s defeat, at the hands of a team that had lost three of their previous four league outings, was compounded by the sending off of their midfielder Ivan Rakitic after 81 minutes.

They are now just one point clear at the top of La Liga on 24 points after 12 games, one point clear of Atletico Madrid, Alaves and Sevilla, who came from behind in the second half to beat Espanyol 2-1 at home with an 89th-minute goal from Wissam Ben Yedder.

Betis’s livewire winger Junior gave the visitors a deserved lead in the 20th minute, finishing off a hugely impressive counter-attack that had started in their own penalty area.

Captain Joaquin then doubled their lead in the 35th after another venture down the wing from Junior.

Messi, back in action after a three-week absence with a broken arm, pulled Barca back into the game by converting a penalty midway through the second half.

Yet Betis restored their two-goal cushion through Giovani Lo Celso with the help of an uncharacteristic error from Barca’s usually reliable goalkeeper Marc-Andre ter Stegen, who fumbled the shot into the net.

Arturo Vidal quickly responded with a goal down the other end but Barca were suddenly left with 10 men when Croatian midfielder Rakitic was dismissed for a second booking.

Former Real Madrid forward Sergio Canales soon made it 4-2 to Betis, sliding to the floor to knock in a pass from the electric Junior.

Messi scored from close range in stoppage time but Betis hung on to clinch a first league win at the Nou Camp since 1998.

“We will enjoy this victory and the joy and satisfaction we have given to Betis fans who follow their team every day, winning here and scoring four goals is something you will never forget,” said Betis coach Quique Setien.

“When you come here, you always expect to suffer but we knew if we showed character and overcame the stress we could play well and have the ball, and Barca are a team that suffers without the ball and struggles to get it back.”

The atmosphere at the Nou Camp at kick-off was lifted by the return of Messi, who broke his arm against Sevilla three weeks ago, even though the Catalans had since won four and drawn one of their five games without their all-time top scorer.

The Argentinian came close to scoring in the opening minute but failed to properly connect with the ball and Betis quickly asserted themselves, seriously challenging Barcelona for ball possession, the rarest of sights for opponents at the Nou Camp.

Betis had squandered several chances before Junior broke the deadlock although it took an outstanding save from visiting goalkeeper Pau Lopez, formerly of Barca’s neighbours Espanyol, to prevent Clement Lenglet from levelling before Joaquin made it 2-0.

Barca coach Ernesto Valverde took off midfielder Arthur for Vidal at the start of the second half to give his side more dynamism but they continued to leak chances and Betis showed no remorse.

“The problem was that we did not play well, we did not control the game and we kept on making mistakes which is why we were behind at halftime,” said the coach.

“In the second half every time we scored and got back in the game they struck back immediately.”