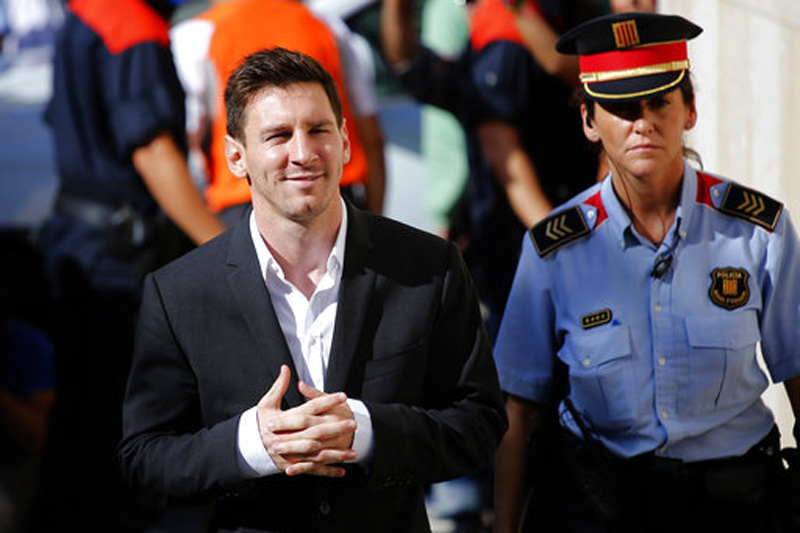 BARCELONA, Spain, June 23: Lionel Messi has offered to pay an additional fine of 500,000 euros ($558,000) to ensure he avoids a 21-month prison sentence for tax fraud that a judge is expected to suspend, a Spanish state prosecutor said Friday.

State prosecutor Isabel Lopez Riera told The Associated Press the fine-for-time deal was presented by Messi's lawyers to the judge who will rule on whether to suspend Messi's sentence — as is widely expected. Lopez Riera said she has told the judge that her office is not opposed to the deal.

Lopez Riera said Messi's lawyers have made a similar offer for the Barcelona player's father, Jorge Horacio Messi. He is offering to pay 360,000 euros ($402,000) to avoid his 15-month sentence for helping his son cheat on his taxes.

In Spain, prison sentences under 24 months for first-time offenders can be suspended by a judge.

The government attorney representing Spain's Tax Office in the case will also be able to weigh in on the proposed deal. As state prosecutor, Lopez Riera is impartial in the case as a defender of the public interest.

Last year, a court in Barcelona found Messi and his father each guilty of three counts of defrauding tax authorities of 4.1 million euros ($4.6 million) from 2007-09. The unpaid taxes were from money made through endorsement deals, not Messi's salary paid by Barcelona.

Messi was fined 2 million euros and his father 1.5 million euros. Both were originally sentenced to 21 months, but his father's sentence was later reduced to 15 months.

In the last two weeks, Real Madrid forward Cristiano Ronaldo and former Real Madrid coach Jose Mourinho have been accused by a Madrid-based state prosecutor of having defrauded Spain's Tax Office of millions of euros (dollars) in unpaid taxes.

Both have denied wrongdoing.

A Spanish court said on Friday it has exchanged a 21-month prison sentence handed to football player Lionel Messi for tax... Read More...

A Kansas man robbed a bank last week in order to go to jail and avoid his wife, court documents... Read More...

Nepal witnesses sharp decline in COVID-19 cases, only 570 new cases recorded in past 24 hours
19 hours ago
Marriage attendee found with left leg chopped off
23 hours ago