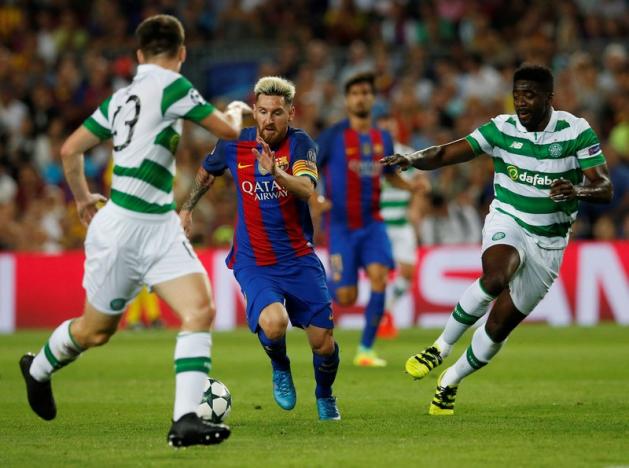 BARCELONA, Sept 14: Barcelona coach Luis Enrique hailed hat-trick hero Lionel Messi as the greatest player in the world "in every position" after the Argentine maestro sent another record tumbling in a thumping 7-0 Champions League win over Celtic.

Messi became the first player in European Cup history to score six hat-tricks as he bagged his 40th career treble for club and country in Barca's biggest European Cup win.

It was also Celtic's heaviest ever defeat in the competition.

The five-times World Player of the Year also assisted one of Luis Suarez's two strikes in the goal glut as he weaved his way across the Barcelona front line.

"Messi plays with complete freedom and he can change his position as he wants. He's the best in the world in every position," Luis Enrique told a news conference on Tuesday.

"If he plays as a number 9, a number 8 or a number 6, he's the best in the world. He can judge the perfect pass from 40 yards and put the ball wherever he wants.

"He's total football and we'd be very stupid if we imposed limits on him," he added.

"For me, he's the best player of all time, both for the number of goals he scores and for his footballing vision."

Celtic coach Brendan Rodgers was also in awe of Messi and the other parts of the ruthless 'MSN' attacking trident of Messi, Suarez and Neymar.

"They are very special players, they have incredible movement and speed and stopping them is very difficult because they are world class," he said.

"We tried to close down the spaces but they have so much quality and speed. They move the ball around so quickly, they are at the top of the game."

Despite overseeing the club's record defeat in European competition, also the heaviest defeat for any club that has won the European Cup, Rodgers tried to remain positive.

"We're going to try and learn a lot in this Champions League campaign," he said. "It's no shame to lose 7-0 here."

MADRID, Aug 3: Florentino Pérez chose his own way to reassure everyone that the 32-year-old Modrić isn't going anywhere, with... Read More...