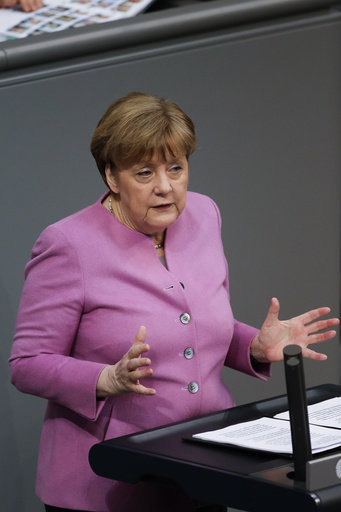 In her strongest comments so far about Erdogan's statement, Merkel said the Nazi comparisons were "sad" and "so incredibly misplaced that one really can't comment, but they cannot be justified."

"We will not allow the victims of the Nazis to be trivialized," she said. "These comparisons with the Nazis must stop."

Erdogan made the comment on the weekend after several German municipalities canceled events in which Turkish Cabinet ministers had planned to address rallies in Germany in support of a national referendum on constitutional reform that would give the Turkish president more powers. Officials have cited problems with overcrowding and fire safety, and other issues

About 1.4 million people of Turkish descent living in Germany are eligible to vote in the referendum.

In a step back from the heated rhetoric of recent days, Turkish Prime Minister Binali Yildrim told reporters in Ankara Thursday that Germany seems to be taking sides in the upcoming referendum, but he did not repeat the Nazi comparison.

Asked about Merkel's comments, Yildrim said Germany "may be disturbed" that a yes vote is likely in the referendum, but that if it is interfering in the process it amounts to "meddling" in another country's affairs and is "very wrong."

Some rallies have gone ahead, and Merkel's government has emphasized it wasn't involved in blocking the others, but must respect the decisions of local authorities.

But as the rhetoric in Ankara has escalated, German officials have been expressing increasing irritation with Turkey.

Adding to the tension has been Turkey's arrest in February of German newspaper reporter Deniz Yucel, whom Erdogan has accused of being both a German spy and a "representative" of the outlawed Kurdish rebel group PKK.

Yucel, a reporter for Die Welt with German and Turkish citizenship, was detained in Istanbul over his reports about a hacker attack on the email account of the country's energy minister.

Germany has dismissed Erdogan's claims about Yucel as "absurd," and Merkel told Parliament that the government is working "with all its means" to win Yucel's freedom.

She told lawmakers that in all of her government's talks with Turkey, she and other German officials have emphasized Turkey's need to respect "freedom of opinion, freedom of speech and freedom of the press."

Gabriel called the meeting "good, honest and friendly, but also hard and contentious" and the two sides agreed to meet again in Turkey.

ITAHARI, July 26: With the arrival of monsoon, Manju Magarati of Itahari ward-4, Gairigaun has started staying awake during the night.... Read More...

We are now suggesting to our friends to file complaints at the TRC to seek reparations only and let the... Read More...