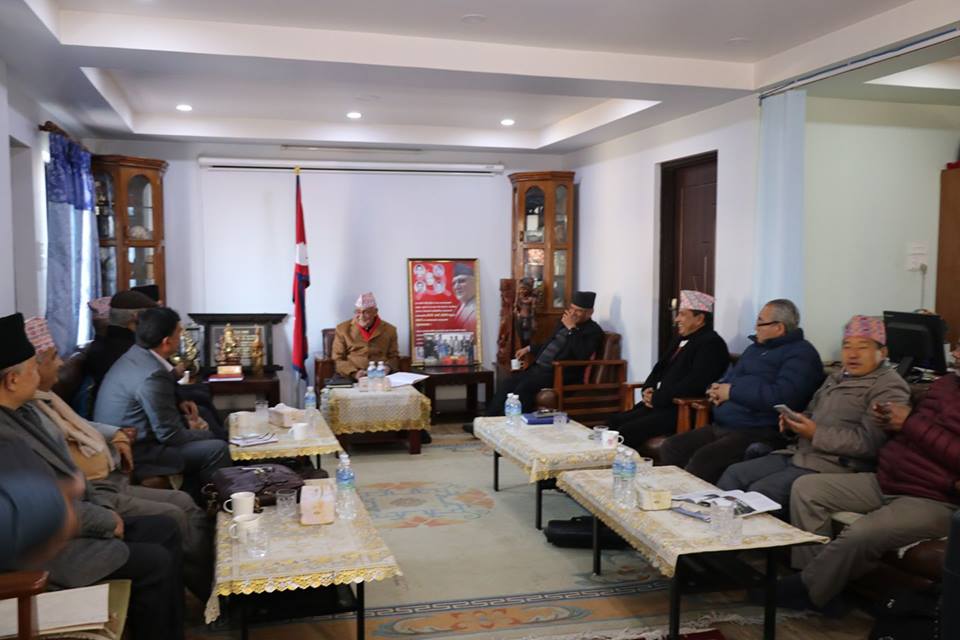 KATHMANDU, Jan 22: The unification talks between CPN-UML and CPN (Maoist Center) have hit a roadblock with a section of UML leaders objecting to Maoist's proposal to rotate the party leadership.

A high-level meeting of the two parties held at UML Chairman KP Sharma Oli's residence in Balkot ended without entering into the agenda of party unification citing lack of homework.

Leaders said differences over the leadership of the new party were the main reason behind the delays in finalizing the unification talks.

Maoist Center has said that chairmen of the two parties should alternately lead the party and the government drawing rebuff from several UML leaders eyeing the helm of the new party. While UML's rank and file appear positive to rotate the government, they have said that party Chair KP Sharma Oli should remain in control of the party.

Sunday's meeting attended by senior leaders of the two parties concluded after approving a seat-sharing proposal submitted by a joint task force. As per the agreement, the UML and Maoist Center will respectively field 29 and 14 candidates for the upcoming National Assembly elections. The meeting also formed a joint team under UML Vice-Chairman Bamdev Gautam to develop the left alliance's vision for good governance and development plans.

"Plans to form a separate committee were postponed for the next meeting after Maoist chairman cited need of homework," said a UML leader present in Sunday's meeting. The leader said that the meeting ended without entering into the agenda of unification due to other engagements of Oli.

Despite UML's proposal to sort out the differences putting aside the issue of leadership, Maoist Chairman Dahal insisted on the need for a deal on premiership and party leadership before settling on other issues.

"Other issues could be resolved with relative ease if there is an agreement on party leadership and government. That's why our focus is to sort out major portfolios," said Maoist Spokesperson Pampha Bhusal.

Leaders said Oli and Dahal, who held two rounds of talks since Friday, are still at odds over the new party's chairman.  Oli, despite his readiness to rotate the premiership, is unwilling comply with Dahal's demand for rotation in party leadership.

Despite disagreement over the key portfolio, sources said the two leaders have reached an understanding to share key portfolios including constitutional positions and chief minister on already agreed upon model of 60:40 split in power.

"There would also be 60:40 split in the organization as envisioned by the election manifesto," said Mani Thapa, a Maoist leader.

Rumors of political change intensify in Nepal after R&AW chief’s visit
12 minutes ago
NC demands govt rescue the students who were attacked in Dehradun, India
18 hours ago
World Bank to provide Nepal over Rs 9 billion for project to boost agro sector, support post-pandemic recovery
22 hours ago

No one should die in search of hospitals, says lawmaker Lingden
15 hours ago