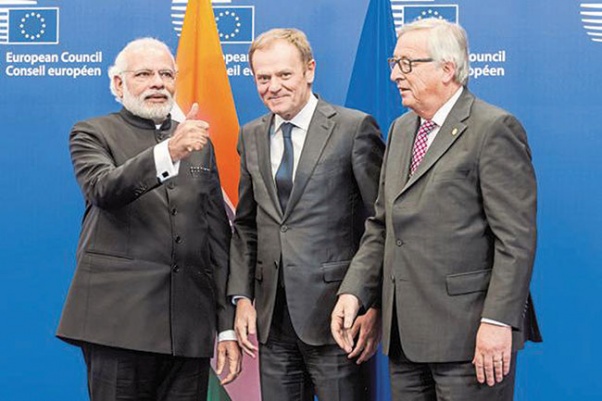 For the European Union, South Asia falls neither under its sphere of influence nor is it among its priority areas

The inertia over negotiating Madheshi demands owes a little to our internal incompetency, but to a larger extent to Nepal's "external threat" perception that never seems to fade. The desperation caused by the Joint India-EU Statement at the end of March is a reminder of Nepal's fear-gripped psychology, its mistrust of the international community, and its assumption of Indian's malafide intent. The Ministry of Foreign Affairs in its statement asked both the EU and India to stay away from Nepal's internal affairs. From here in Brussels, the seat of the EU headquarters, it seemed bit of an overreaction on Nepal's part.

The overreaction reflected our fear-gripped psychology and mistrust of international community and neighbors. Based on my research on Nepal's social and political contexts between 1950 and 2013, a few things were clear: first, Nepal feels it faces this enduring threat to its existence, second, almost every contentious issue between the residents of the hills and the plains is attributed to external actors. Therefore there is much room for external actors (the EU and India) to play more constructive roles so as to regain Nepal's trust.

The reaction to the EU-India statement showed our anxiety-gripped state. Of four erstwhile independent Himalayan states—Nepal, Bhutan, Sikkim and Tibet—only two remain independent. So Nepal's policies—both domestic and foreign—were always high on agendas of "territorial integrity" and "national identity". The dispute over Buddha's birth, maintain a 15-minute time difference with India, celebrating a common festival like Holi a day before it is celebrated in India—they all contribute to construct a Nepali identity that is distinct from India's, even if this means disregarding the "Madhesh".

As international politics is about strong powers—super or regional—political actors in Nepal claim their anxieties are valid. The diminished trust is also in reference to Sikkim, whose merger with India was rather an overlooked event at the height of the Cold War. But Crimea's annexation by Russia has added fuel to the nationalist fire and reminded Nepal of its own fragility. It now feels it cannot trust international mechanisms to prevent such an aggression. India's recent interference only reinforced this mistrust.

India and the EU can help break the inertia by "rebuilding trust". From here in Brussels, it seemed Nepal, after the joint EU-India statement, was anxious that its old fears of being gobbled up by India were coming true. Nepal recognizes it is not an important piece of the international chessboard, in the language of international relations.

One of the concerns raised with the Rensje Teerink, the EU ambassador to Nepal, was that why did the joint EU-India statement express reservations with the new constitution when the EU delegation in Nepal had welcomed it?

As a value-based actor, the EU is concerned about the divisive constitution. But the role of the EU delegation in Kathmandu is minimal. It mainly deals with humanitarian and development issues. The EU, far from South Asia, has least interest in South Asian regional politics. For the EU, South Asia is neither under its sphere of influence nor its priority. Brussels has far urgent priorities in its eastern and southern regions: refugee/migrant crisis, ISIS threat, threat to peace and stability in its southern regions.

The EU, known for its value-based engagements and as a credible institution in its neighbourhood, plays a more substantial role in its own neighbourhood. For instance the EU clearly supports territorial integrity and sovereignty of states like Yemen and Syria, even as it emphasises for political settlements of their disputes.

The joint EU-India statement was a surprise for Nepal. As statements are tools to express one's position, a statement indicative of the EU's support for Nepal's territorial integrity and sovereignty—something the EU seems happy to do closer home—can do a lot to settle down the jangled nerves of the establishment in Kathmandu. Second, it could propose revising (and mediating, if possible) Nepal-India relationship to fit to the modern context. Nepal wants to redefine its ties with India but it is also fearful of what might replace the current arrangements. Would such new relations be as "special" as now? Would it be bitter?

India also has some work to do. It is reasonable that India seeks a stable neighbourhood (abroad) and prosperity and development (at home) in order to become a leading global power. Unstable neighbourhood is not its choice. India has always been a supportive partner, mediator and mentor for Nepali statesmen (earlier for the likes of King Mahendra then for our democratic politicians). Emerging from love-hate relationship, Nepal must recognize that India has a stake in Nepal owing to our shared and complex geography. So Nepal must now look to foster mutually beneficial relations rather than fuel anti-Indian sentiments.

Indian Prime Minister Narendra Modi gave new impetus to Indo-Nepal relationship during his historic visit to Nepal and established himself as a bit of an idol. The goodwill generated by Modi's visit was diluted during the blockade. So, India, on its part, can undertake trust-building measures for example by offering to revise the 1950 treaty, thereby reinforcing mutual trust. It should try to engage Nepal, not interfere, challenging as this new role will be. The Madheshi demands are unheeded due to Nepal's external anxieties. So here too rebuilding trust been India and Nepal could help find solutions in Madhesh.

Nepal is a peace-loving country, so the recent violence in the Tarai belt was most unfortunate. Nepal should try to hold on to its image as a non-violent and peaceful actor, always walking on the path shown by Buddha. Brokering peace is a political process but sustaining it is far more than that. Creation of shared national symbols that reflect the country's diversity can be a stepping stone towards a viable constitutional settlement. That will also be the most desirable way to mend the country's frayed relations with the international community.

The author is a Political Science and International Relations graduate from the Universidade Fernando Pessoa, Portugal. She is currently based in Brussels

Souls of My City: Mending Soles

“What do you expect from life? Should it be food to feed you while you’re hungry, home to stay, clothes... Read More...

Every relationship needs mending and bending

Meeting of the ruling coalition begins
14 minutes ago