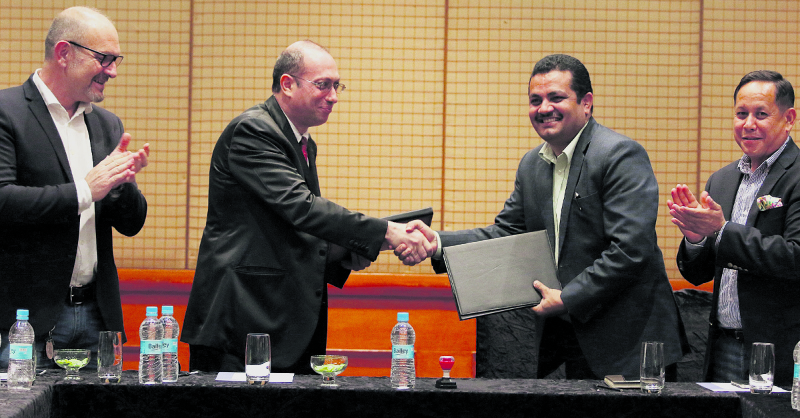 The company also has the contract for Melamchi Water Supply Project (MSWP). Sahas Urja Limited (SUL), signed an agreement with the CMC to develop the project as per the Engineering Procurement and Contract (EPC) model on Friday, according to a press release issued by the SUL.

The project is estimated to cost a total of Rs 11.86 billion, and will be built on the confluence of Solu and Dudhkoshi rivers.

The CMC is currently carrying out the project's tunnel work at the cost of Rs 7.72 billion. The Italian contractor company, however, was under scrutiny until August last year for delaying the tunnel construction of Melamchi Water Supply Project.

Speaking at the contract signing program, President of SUL Him Prasad Pathak said construction of the Solukhola Dudhkoshi Hydropower Project would start soon as the initial work had already been completed.

He said the power generated from the project would be connected with Tingla sub-station.
Director of CMC Asia Salvatore Casciaro, said, “This is our second project in Nepal and we are confident about finishing the construction work within the deadline. We are also happy to be able to contribute in the development of Nepal's hydroelectricity sector.”
Advisor at SUL Yuvaraj Khatiwada, who is also the former vice-president of National Planning Commission (NPC), said he had encouraged banks and financial institutions (BFIs) to invest in national hydroelectricity projects while he was the governor of Nepal Rastra Bank (NRB).

“My pleas have turned out to be fruitful.  I am hopeful that the CMC will complete the construction work in time and maintain quality,” he added. The propject will have investments from a consortium of 11 different BFIs led by Nepal Investment Bank.
Of the total investment, 27 per cent will be equity investment and the remaining 73 per cent will be loan investment. The company has allotted 20 per cent equity share to the general public.

Meanwhile, Chief Executive Officer of Nepal Investment Bank Jyoti Prakash Pandey said the main challenge was timely completion of the project. A 40 meter-long dam and 4.5 kilometer-long tunnel will be built for the project.

The Solukhola Dudhkoshi is the biggest project in the country to be constructed with domestic investment.