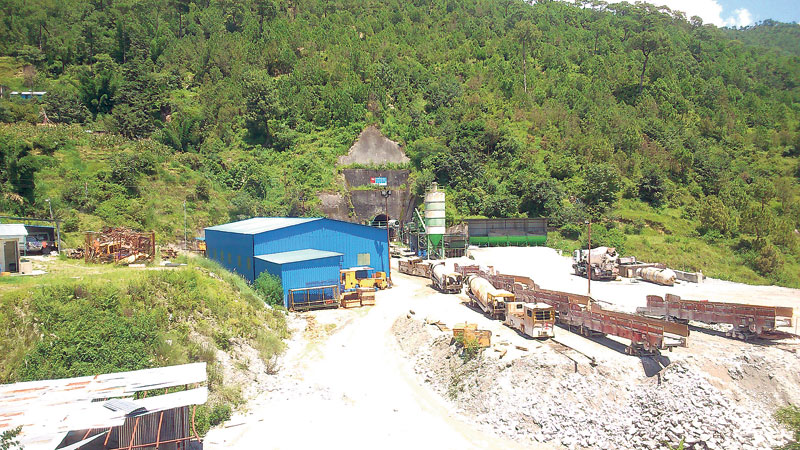 This undated photo shows the mouth of the tunnel of the Melamchi Project in Sundarijal. ( Republica Files )

KATHMANDU, Sept 28: Buoyed by the progress made in Melamchi Water Supply Project (MWSP), the civil contractor of the mega project is now looking for other contracts mostly in hydropower projects.

Likewise, CMC has also been selected in pre-qualification for both packages of Tanahu Hydropower Project (140 MW). The packages include construction of dam and tunnel works as well as building powerhouse.

However, concurrence from Asian Development Bank and Japan International Corporation Agency is yet to be received for notice of pre-qualification.

It has also been learnt that CMC is busy in consultation with different project developers, particularly in construction sector. Sources close to CMC say that its interest in other projects is a part of the company's strategy of entering South Asia through Nepal.

Contracts of remaining tunnel works and headwork of MWSP was awarded to CMC after the government terminated the contract with a Chinese contractor in 2013 citing unsatisfactory work. However, CMC's performance until March was also not satisfactory.

Though CMC's work was affected by the earthquake and Indian blockade, project officials say the contractor was buying time in one way or the other. But contractor dug 912 meters of tunnel and also expedited its other works. It set a record in August, digging 1,003 meters.

Government officials are still skeptic on whether the contractor will be able to continue to its pace in the coming days as well. However, other say CMC will work hard to leave good impression on other project developers where it is vying to get civil and other contracts.

Once CMC completes digging Sundarijal-Sindhu section of the tunnel in October, it will have a set of extra equipment, which will give it a competitive edge over other bidders. It will be in a position to immediately mobilize equipment, while others can take at least six months to other and bring equipment.

Officials of MWSP are encouraged by the recent progress in the project. Ghanashyam Bhattarai, executive director of MWSP, said: "The recent progress made by the contractor is encouraging. It can establish credibility by completing this project in time,” Bhattarai added.

Before the earthquake of 2015, the contractor was behind the schedule and ineligible to receive any incentives declared in contract agreement. But it might eligible for the incentives as its proposal for deadline extension due to earthquake and Indian blockade is still under consideration.

CMC has dug 700 meters of tunnel in September till Monday. It plans to dig an additional 150 meters by the end of this month.

Melamchi Project gets another jolt as contractor faces blacklist

KATHMANDU, Aug 11: High Himalaya-Raman JV, which was selected for tunnel and dam construction of Melamchi Drinking Water Project, has been... Read More...