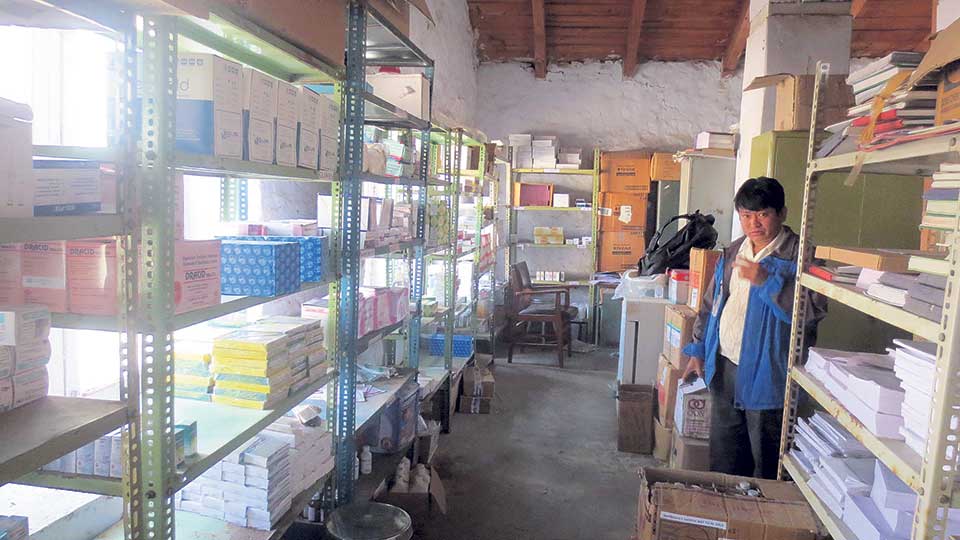 An official inspects medicine stock in the storeroom of District Hospital, Rolpa in this recent picture. Photo: Dinesh Subedi

ROLPA, Jan 7: Access to medical services has always been a matter of struggle for the locals of Rolpa. Lack of adequate number health centers force people from several remote areas of the district to visit the district hospital. However, the District Hospital is also in equally sorry state. Neither is it equipped with necessary tools and machines nor is it able to provide free medicines to the people.

“There should have been 70 types of medicines in stock for distributing to the patients for free. But we don't have more than a dozen of those,” said storekeeper at the hospital Chandra Bahadur Gharti.

“Twelve health facilities including this hospital come under the jurisdiction of the municipality. However, the municipality has bought drugs worth Rs 400,000 only. If this continues to happen, our store will be empty within two months,” he added.

He further informed that the hospital does not even have medicines for patients suffering from asthma and heart ailments, which he says is a very serious issue. “Many patients, including elderly, depend on the hospital for medicines related to asthma and heart diseases. But since some weeks, we have not been able to provide it to them,” he said.

These medicines are crucial for such patients, he added while stressing on the importance of such life saving drugs. There are no medical stores or health centers in remote villages, where the patients can buy those medicines. Though, some stores in the district headquarters do sell some of those medicines. “But the cost of these medicines at private pharmacies is so high that it is hard for the general people to purchase them. And when they have to pay for free medicines, they are least likely go for it, anyway,” Gharti stated.

Gharti, however, reported to Republica that shortage of medicines is not a new thing in Rolpa. In his several years of service, he hardly remembers a time when the hospital had all types of free medicines in the store. “But it had not been this worst, ever,” he said. “Shortage of medicines during the economic blockade, was a different thing. We would generally have far more medicines in our store than we have now,” he added.

Acute shortage of drugs is the story of almost all medical centers run by the government in Rolpa. Even paracetamole tablets and Jeevan Jal, the most common and most demanded items are not in stock of government health facilities. Jhak Bahadur Chaudhari, in-charge of a health post in Sun Chhahari Rural Municipality, said that situation of their health post was even more critical. He said that the health post does not even have first aid kits in the store. “If we get patients for cuts also, we won't be able to help,” he said adding that the health post does not have tools necessary to assist pregnant women during delivery.

The health post is designated as a 'birthing center' and as such, it supposed to provide proper delivery services. Chaudhari says that while the government encourages women to visit birthing center during pregnancy, for delivery and for neo-natal care, the sorry state of health institutes has been discouraging women from doing so.

Chadhari stated that safe motherhood packages do attract women to health posts and birthing centers. He further informed that the medicines in the health post's store might last for a month only. “After that, we need to close the store literally as we don't have budget to buy fresh stock of medicine,” he warned.

Shortage of medicines during the economic blockade, was a different thing. We would generally have far more medicines in our store than we have now.
Chandra Bahadur Gharti, District Hospital, Rolpa

Almost all rural municipalities have been reporting similar conditions. Locals on the other hand are accusing their local representatives of not paying proper attention serious issue like health care. Some locals even noted that the new local representatives have understood development just in terms of constructing new roads.

Chief of District Public Health Office (DPHO), Tejendra Saud, however denied that there is shortage of medicine. He claimed that 'few' medicines might be in shortage at some health posts, but added that in such cases the authorities concerned should visit the DPHO and take them.

Earlier, health in-charge would directly visit the DPHO for medicines, but now this has changed. The drugs now are sent through rural municipalities. The change in process, he claimed, might have created shortage of medicine.

SAPTARI, Jan 11: Many government health institutions in the district are facing a shortage of medicines provided for free by... Read More...

Bishwa Prakash's question to Oli: When will you get rid of 'Congress phobia'?
3 minutes ago