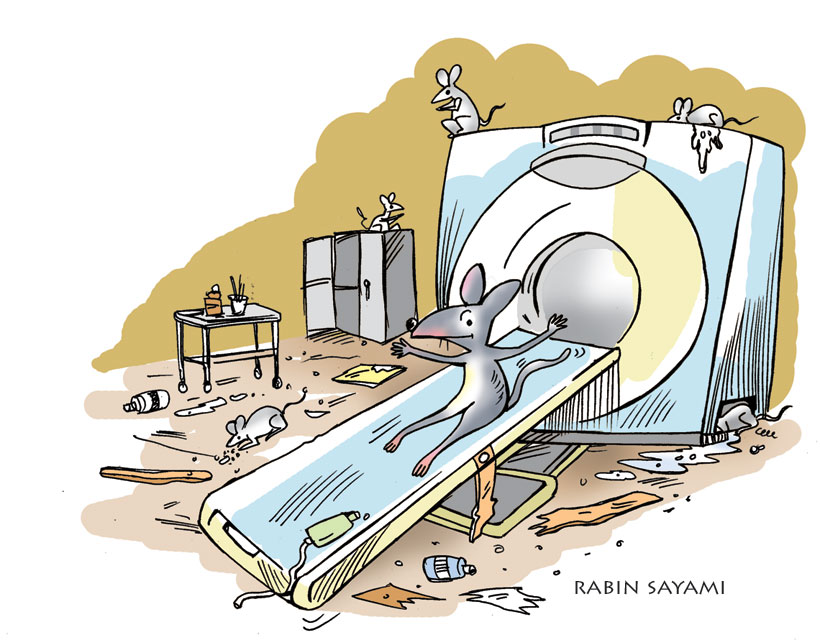 KATHMANDU, Dec 8 : Medical equipment worth billions of rupees is dumped in the stores of Nepal's top government hospitals when they break down. The hospitals neither repair such equipment nor auction them off. Bir Hospital, Teaching Hospital at Maharajgunj, Kanti Children's Hospital, B.P. Koirala Memorial Cancer Hospital in Chitwan, the Regional Hospital in Pokhara and scores of others across the country have been dumping expensive equipment for years, preferring to procure new equipment rather than go for repairs.

According to the Ministry of Health, there are more than 100 state-owned hospitals in the country, including district hospitals. Bir Hospital, the oldest hospital of the country, has dumped damaged equipment for years  including equipment for urology, neurology, cardio, general surgery, ENT, radiology, eye, physio and gastrology treatment.

Some 50 to 100 cancer patients come to Bir for treatment on a daily basis. "Our patients are affected by the lack of a functioning cobalt-60 machine," said Bhagwati Thapaliya, administrative chief at the hospital's purchase unit.

Bir, which spends about Rs 200 million annually on equipment, has started a tender call process for the procurement of equipment worth more than Rs 100 million, including a CM and cobalt-60 machines.

The story is no different at Tribhuvan University Teaching Hospital (TUTH). TUTH has dumped equipment worth millions in its stores. Equipment worth Rs 10 billion is lying in the stores awaiting repairs, according to  confidential sources at the hospital. After Dr Bhagwan Koirala assumed the post of director at the hospital, he started auctioning off the damaged equipment. "Some very urgent equipment, including four ventilators, are in  disrepair and the hospital also needs four hemodialysis machines," he said.

Amit Kumar Chaudhari, biomedical engineer at TUTH, said the equipment will be further damaged if they are left unused. "Humidity, temperature, dust and smoke take their toll," he said. "The life of such devices is generally two to 10 years."

Chandra Mani Bhandari, administrative officer at TUTH, informed that the hospital spends around Rs 130 million annually on the purchase of large equipment and on repairs.

Kanti Children's Hospital at Maharajgunj has dumped several pieces of expensive equipment over the last 33 years. "We are preparing an inventory of old and damaged equipment. The market price of these equipment is in the millions," said Tika Ram Dhakal, administrative officer at Kanti. "We spend around Rs 50 million on equipment purchase and maintenance annually," he added.

Hospitals in Kathmandu  neither repair their equipment nor auction them off the way they should. "If we maintain the equipment, we can save money. If we can't maintain, we can donate them to district hospitals that need them," said Prof Dr Dinesh Binod Pokhrel of TUTH.

The situation at hospitals outside  Kathmandu Valley is also similar. A CT scan machine purchased only six months ago by BP Koirala Memorial Cancer Hospital is no longer working. A radio therapy machine at the hospital has also been dysfunctional for the last six months. About 2,000 patients get therapy tests at the hospital every year.

Prakash Pande, a bio-medical engineer at BP Koirala Memorial, said it costs Rs 5 million to repair a therapy machine. "It is better to buy a new one instead of repairing," he said. A new machine costs Rs 150 to 160 million. "If some Rs 500 to 600 million is spent, all the old equipment can be replaced."

C4 count and thyroid test machines at Seti Zonal Hospital in Dhangadhi, along with ventilators pipes, broke down several years ago. They have not been repaired even though the repair costs would be minimal.

A CT scan machine costing Rs 30 million had been in the stores at Pokhara Regional Hospital for two years before it was repaired at the cost of Rs 13.6 million about six weeks ago. "It will not function for very long," said Dr Shree Krishna Shrestha, superintendent of the hospital. "We don't yet have vital equipment such as MRI and cardio-disease testing machinery, " he said. Patients have to go to expensive private hospitals for such tests.

Health Minister Gagan Thapa said that the ministry has formed a five-member committee, including Dr Ramesh Koirala, a senior doctor from Gangala Hospital and a biomedical engineer, to look into the situation at major government hospitals. "After the report comes in, we will take necessary action within a month," said Thapa. "We are also planning to hire a company to repair equipment on an annual contract basis and employ biomedical engineers to take care of the equipment," he added.

KATHMANDU, July 12:  Medical equipment supply to hospitals by some contractors shows  how irregularities are perpetrated by  government officials and... Read More...

KATHMANDU, Feb 9: The Ministry of Health has said all the primary health centers across the country would be provided... Read More...