KATHMANDU, Nov 27: Medical colleges across the country have agreed to refund or adjust the illegal fees taken from students. 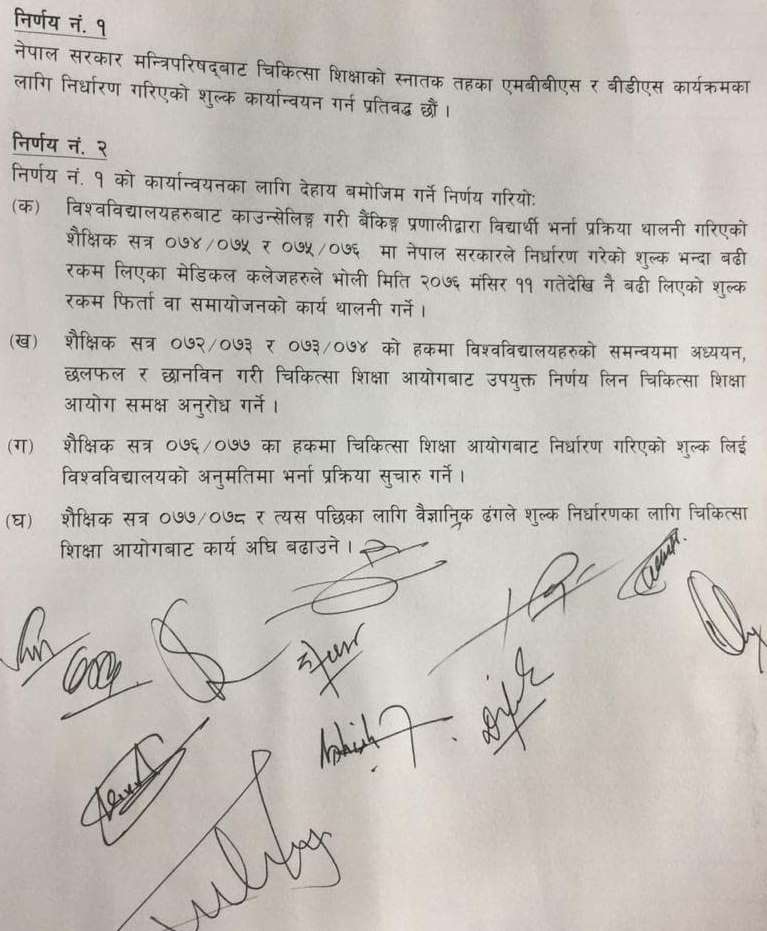 A two-point agreement to this effect was reached during a meeting between the Minister for Education Giriraj Mani Pokharel and medical college owners held at Ministry of Education, Singha Durbar late Tuesday.

According to the deal, medical colleges will start refunding or adjusting the illegal fees taken from students from today.

Earlier on Tuesday, the meeting between Minister Pokharel and college owners had failed to make headway after the latter rejected the government's call to refund or adjust the illegal fees taken from students flouting an ultimatum issued by the government on Monday.

The medical colleges said that they won’t refund the fees for academic years 2018-19 and 2019-20, citing practical hassles in the financial reconciliation, accounting and taxation.

For months, MBBS and MD students and their parents in Chitwan and Birgunj among other places were staging protests against the medical colleges demanding the refund of the illegal fees.

A report of the National Vigilance Center (NVC), an anti-graft body under the Office of the Prime Minister, had concluded that private medical colleges including Birgunj-based National Medical College, Universal College of Bhairahawa, Gandaki Medical College of Pokhara and Chitwan Medical College had illegally collected at least Rs 3 billion from students in the last academic session.

Ignoring the government's repeated calls, the medical colleges accused the government of introducing various regulations against the spirit of the Medical Education Act in an attempt to destroy the medical education system.

Last month, the medical colleges had jointly urged the government to allocate standard quotas for domestic and foreign students, fee structure and admission process giving due respect to rules and regulations.

KATHMANDU, March 22: Private medical colleges under the Tribhuvan University have agreed to return within a month fees that were... Read More...

KATHMANDU, Sept 23: The government has decided to provide Rs 14 million to cover the expenses incurred in the treatment of... Read More...