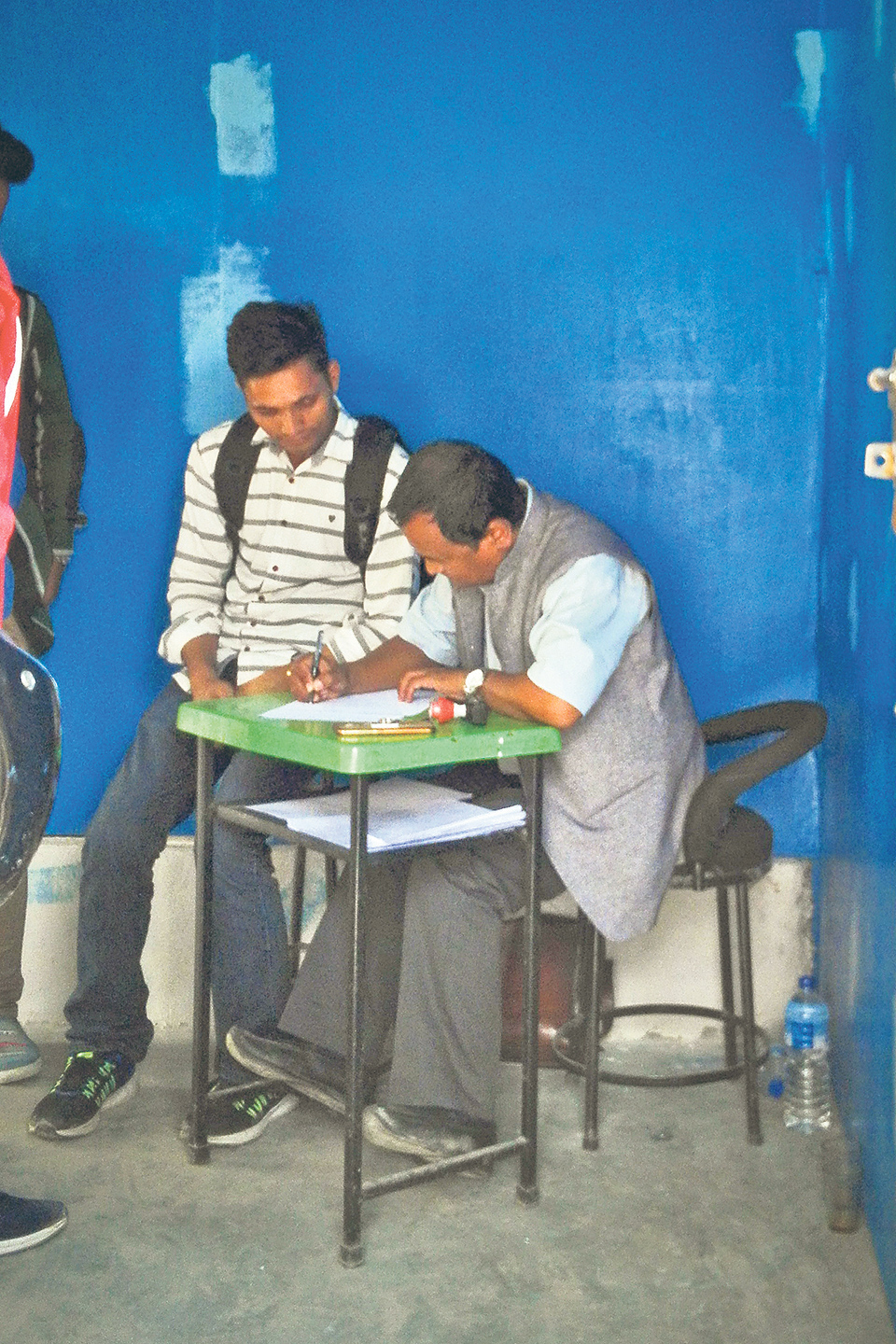 A doctor preparing a medical report of an applicant for the post of investigation officer, near the NID headquarters at Hanumansthan, Kathmandu, Wednesday.

KATHMANDU, Sept 8: Doctors certified by Nepal Medical Council  are found to be selling medical certificates even to those failing the medical tests while applying for National Investigation Department (NID) vacancies, and this is happening right in front of NID headquarters , which is located at the southern entrance to Singha Durbar.

Brokers were seen busy  dealing with aspirants for the NID jobs, along the road stretch from the NID office to Kathmandu District Administration Office (DAO). Some of the brokers were busy  assuring the aspirants of their medical certificates even if they failed  the  medical test, or even without undergoing the test at all.

A broker approached this reporter near the DAO  Wednesday and said he could easily arrange a medical certificate even in case of failure to pass the test.

After paying Rs 300, the broker took this reporter to the queue where a doctor was providing medical reports after showing two pictures on his mobile phone by  way  of testing for  eyesight and  hearing.

Among the five persons  in the queue ahead of this reporter, one got his certificate without undergoing any test. An individual asked this reporter to read a mobile number written on the next wall and informed the doctor about reporter’s failure to read it. “You have failed the eye test but I have approved your vision so you can apply for the job.

“But you need to wear glasses at the medical test to be taken by  NID so that we don’t  both get  into trouble,” the doctor said, issuing the certificate. This reporter  recorded the conversation on a mobile phone. The  certificate had the letter head of Samjhana Laboratory Clinic, Mangal Bazar, Lalitpur and the name Dr Krishna Gopal Maharjan with  NMC license number 11723.

One individual claimed that the same doctor provided a medical report  through a broker to a friend of his who did not even appear in  person. He declined to name the friend, fearing that the latter’s application for the NID job vacancy could get rejected

Asked about the fake medical certificate and the  doctor issuing it, NMC Registrar Dilip Sharma said  the regulatory body could seek clarifications from the former and  take other action. There are about a dozen laboratory outlets between  Hanumansthan and the DAO. These do not carry any names or provide other details  and  only state that medical services are provided. Some also mentioned a Rs 250  fee. Some applicants said that medical certificates are available  in the area after just paying the fee.

Home Ministry Spokesperson Ram Krishna Subedi said that NMC could take action against the responsible doctor if he is found to be making out fake  certificates.

KATHMANDU, Jan 17: In the context when reports about Nepali workers aspiring overseas employment becoming the victims of fraud on... Read More...