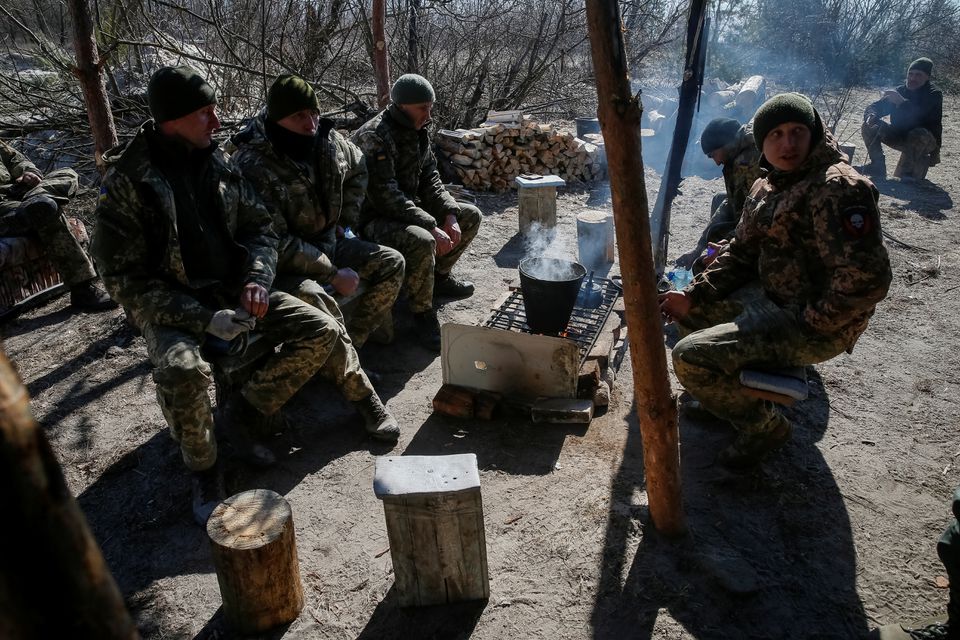 KYIV/LVIV, Ukraine, March 19: Ukrainian President Volodymyr Zelenskiy called on Saturday for comprehensive peace talks with Moscow to stop its invasion of his homeland, warning it would otherwise take Russia "several generations" to recover from losses suffered in the war.

Since launching the assault on Feb. 24, Russian troops facing tough resistance have largely stalled in their advance, even as they encroach on the capital Kyiv. Looking to regain momentum, they have laid siege to cities and blasted urban areas to rubble.

Air raid sirens sounded early on Saturday in the Kyiv, Chernihiv and Zhytomyr regions, but there were no immediate reports of fresh attacks.

The governor of the eastern region of Luhansk, bordering Russia, said there would be a ceasefire on Saturday morning and a humanitarian corridor for evacuations will be opened. read more

"A 'regime of silence' has been agreed for March 19, starting at 9 a.m." (0700 GMT), said Governor Serhiy Gaidai in a message on Telegram. Luhansk lies in Ukraine's coal-rich Donbass region that has been partly controlled by Russia-backed separatists since 2014.

Gaidai, the head of the Ukrainian administration in Luhansk, has said 59 civilians have been killed in the region since the start of the war.

After Russia said it was "tightening the noose" around the key port of Mariupol, Ukraine's defence ministry acknowledged on Friday it had "temporarily" lost access to the Azov Sea, which connects to the Black Sea and would be a major loss for Ukraine.

But Western officials say Russia has taken heavy losses with signs of flagging morale among its troops, a trend Zelenskiy alluded to in a video message in which he urged renewed negotiations to end the war.

"I want everyone to hear me now, especially in Moscow. The time has come for a meeting, it is time to talk," he said early on Saturday. "The time has come to restore territorial integrity and justice for Ukraine. Otherwise, Russia's losses will be such that it will take you several generations to recover."

Russia acknowledged on March 2 that nearly 500 of its soldiers had been killed but has given no update since. Ukraine says the number now amounts to many thousands. Reuters could not independently verify the death count.

Kyiv and Moscow reported some progress in talks this week towards a political formula that would guarantee Ukraine security protection outside of the NATO alliance.

But Ukraine said the need for an immediate ceasefire and withdrawal of Russian troops remained, and each side accused the other of dragging out the talks. read more

Putin has vowed to continue the invasion until it succeeds, promising tens of thousands of people waving Russian flags at a soccer stadium in Moscow on Friday that Russia "will absolutely accomplish all of our plans." read more

The United States has repeatedly warned that Russia may turn for assistance to China, the biggest power that has not condemned the assault.

In a video call on Friday, President Joe Biden told China's President Xi Jinping there would be "consequences" if Beijing provides "material support" to Russia in Ukraine, the White House said. It said sanctioning Beijing was an option. read more

China and Russia deny Beijing is considering giving Moscow military aid. China says it wants to see an end to the conflict.

In the fourth week of their land, sea and air assault, Russian forces have not captured any big cities and Ukraine's elected government remains defiant in the capital.

Fleeing bombardment that Ukraine says has struck housing blocks, schools, hospitals and cultural facilities, hundreds of thousands of Ukrainians had left for of Lviv in western Ukraine, far from the frontline in the country's east.

Three missiles landed at an airport near Lviv on Friday, raising fears the city could come under a deeper assault.

Civilians sheltering in eastern Ukrainian cities have had to endure cuts to electricity, heating and water, with food and other vital resources increasingly scarce. More than 3 million refugees have fled over Ukraine's western border.

Some of the heaviest fighting has been in Mariupol, where some 400,000 people have been trapped for over two weeks. Officials there say fighting has reached the city centre and that near-constant shelling was preventing humanitarian aid from getting in.

In his video address, Zelenskiy said there was no information about how many people had died in the theatre, where hundreds had been sheltering. More than 130 people had been rescued, he said.

As people continue trying to flee through "humanitarian corridors" arranged by Ukrainian and Russian officials, the World Food Programme has warned that food supply chains in the country are collapsing.

Key infrastructure such as bridges and trains have been destroyed by bombs and many grocery stores and warehouses are empty, said Jacob Kern, WFP emergency coordinator for the Ukraine crisis.

"Inside Ukraine our job is in effect to replace the broken commercial food supply chains," he said, calling this a "mammoth task". read more

KYIV, May 7: Ukraine's President Volodymyr Zelenskiy said diplomatic efforts were underway to save the remaining fighters holed up inside... Read More...

Most of Nepalis in Ukraine rescued

LONDON, March 11: Most of the Nepali nationals displaced in Ukraine as a result of the Russia-Ukraine conflict have been... Read More...

KATHMANDU, March 2: As many as 302 Nepalis affected by the Russia-Ukraine conflict have reached safe destinations. Addressing a meeting... Read More...