Mayor instructs not to collect garbage in Lahan: Locals 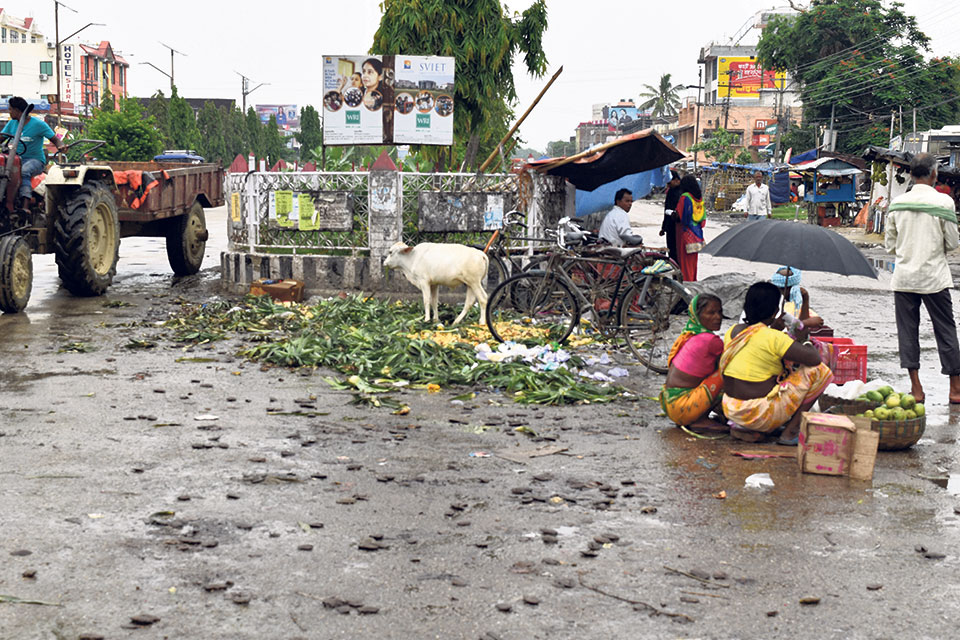 A crossroads of Lahan littered with garbage. The municipality has been facing problems in waste management since the last two weeks over a dispute regarding road expansion drive. Photo: Republica

LAHAN, Aug 2: When the local elections were held last year after almost two decades, it had brought a new wave of excitement among the people across the country. Locals of Siraha too were hopeful that the elections would pave way for development and prosperity.

But the people of Lahan, who voted to elect their representatives, are utterly disappointed with their mayor who instructed not to collect garbage in the municipality.

Residents of Lahan are forced to breathe in stinking air after the municipality stopped collecting garbage since two weeks. The garbage dumped on the roads have started decaying and the locals are fearful that the rainwater might spread diseases around the city. The bad odor spreading around the city has made life unbearable to the locals. But the municipality seemed to remain completely oblivious to the plights of the locals.

It all started after Mayor Muni Sah instructed chief of the Road Division Office, Ram Kumar Dev, to expand the width of the roads inside the municipality to 31 meters. However, Dev said he cannot do so as it is 'against the law'. Mayor Sah insisted, but to no avail.

The residents are not happy that the municipality collects tax from them but refuses to collect the garbage.

Disgruntled with the refusal, he instructed the responsible authorities not to collect garbage of the municipality until the municipality's roads are made to 31 meters wide as per his demand, complained the locals.

“If they don't help us in road expansion drive, why should we collect the garbage?” Mayor Sah was quoted as saying.

On the other hand, the Road Division Office chief Dev said he cannot support the road expansion drive as the said proposal goes against the law.

“The law allows us to expand the width of the roads to 25 meters only. I requested the mayor to make the roads 25 meters wide, but he remained adamant on his demand,” he said. “Following the refusal, he instructed his office not to collect garbage from the highway, which runs through the city.”

“It is wrong to collect cleanliness tax and leave the garbage uncollected. The municipality is committing gross negligence,” said Ashok Agrawal, central member of the Confederation of Nepalese Industries (CNI). Businesspersons along the highway area, who are suffering the most, are among the biggest taxpayers.

During the election campaigns, the most famous slogan was the promise of 'smart city'. Politicians promised to transform the city into a well-planned smart city. Such promises brought them many votes from the local communities. Locals are now questioning if the promise of smart city meant dumping yard in reality.

SIRAHA, LAHAN, Sept 23: The CPN-UML has claimed the posts of mayor and deputy mayor in Lahan Municipality. The UML's... Read More...