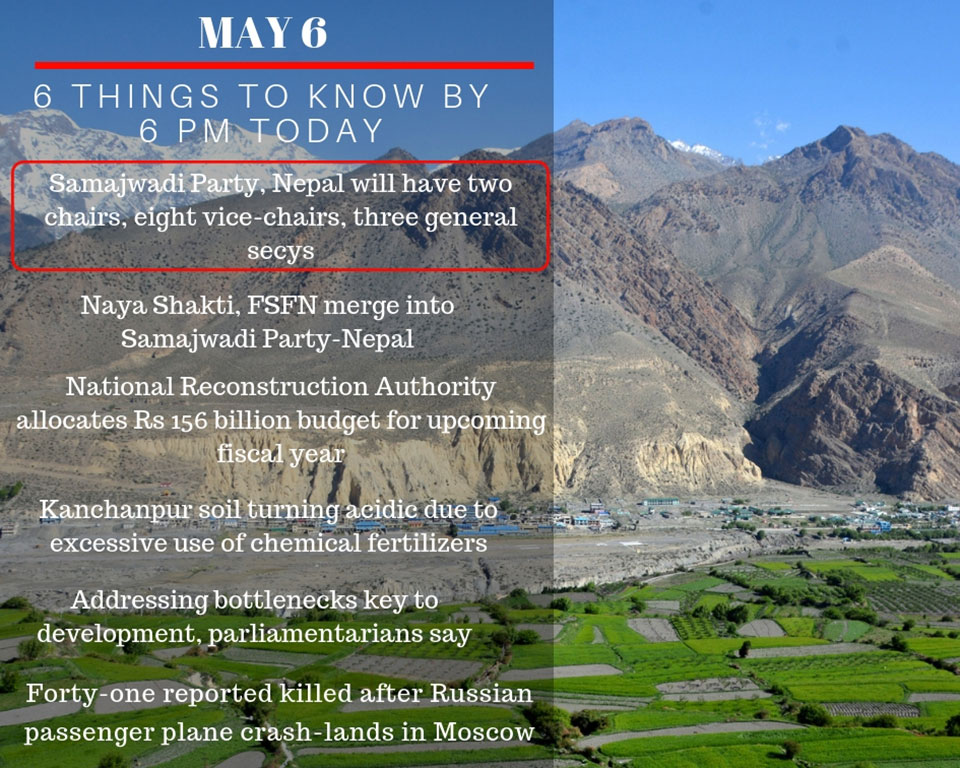 The formal announcement of unification between Naya Shakti Nepal and Federal Socialist Forum Nepal (FSFN) has been made amid a function held in the capital on Monday. Coordinator of the Naya Shakti Baburam Bhattarai and Chairman of the FSFN inked a nine-point deal to form a new party called "Samajwadi Party, Nepal" during the program at Nepal Academy.

Samajwadi Party-Nepal, a merger of two parties – Naya Shakti Nepal and Federal Socialist Forum Nepal (FSFN) will champion socialism and directly elected head. The party will also advocate for a proportional election system. In addition, the party will also raise more issues on the basis of identity and pressurize the government to amend the constitution. The two parties, led by Baburam Bhattarai and Deputy Prime Minister, Upendra Yadav signed an agreement today at Nepal Academy, Kamaladi.

The National Reconstruction Authority has allocated Rs one hundred 56 billion budget for the fiscal year 2019-2020 to expedite reconstruction and rehabilitation works. A meeting of the NRA’s directorate committee chaired by Prime Minister KP Sharma Oli took a decision to this effect on Sunday, according to a press release issued by the NRA.

Kanchanpur soil turning acidic due to excessive use of chemical fertilizers

Excessive use of chemical fertilizers by farmers is found increasing the acidity of the soil in their fields. The level of acidity in the soil has increased due to the lack of organic matter. It is said the crop yield is declining every year due to the increasing soil acidity and lack of organic nutrients for the plants. Various tests carried out vindicate to this.

Parliamentarians have urged the government to address hindrances to effectively implement the policies and programs this year. The parliamentarians, Sarita Giri and Sher Bahadur Tamang highlighted how governments had repeatedly failed to assess the hindrances of development despite lacklustre development.

Forty-one people on board a Russian Aeroflot passenger plane were killed on Sunday, including two children, after the aircraft caught fire as it made a bumpy emergency landing at a Moscow airport, Russian investigators said. Television footage showed the Sukhoi Superjet 100 crash bouncing along the tarmac at Moscow’s Sheremetyevo airport before the rear part of the plane suddenly burst into flames.

KATHMANDU, May 6: The formal announcement of unification between Naya Shakti Nepal and Federal Socialist Forum Nepal (FSFN) has been... Read More...