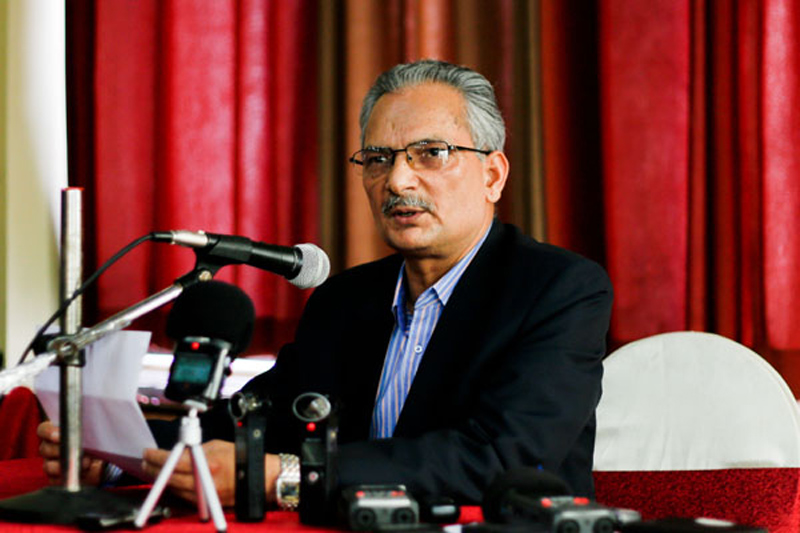 KATHMANDU, Feb 27: Former Prime Minister Baburam Bhattarai, who is also the federal council chairman of the Samajwadi Party, has said that there was no ill-intention involved in the decision made by his government to transfer the ownership of Nepal Trust lands at Matatirtha, Mahadevsthan, Satungal, Ichangu among other areas to various individuals.

Addressing the parliament meeting on Wednesday, former prime minister Bhattarai claimed that his cabinet’s decision to transfer the ownership of the lands, which were used by the tenants for a long time, favored the landless, genuine tillers and peasants.

“Although the lands distributed by King Mahendra to poor peasants rendering them tillers under the ‘Farmais Birta’ practice were later brought under the Nepal Trust ownership, the royals were not the owners of those lands. Hence, the then Council of Ministers made a policy decision to allow that land to be registered in the name of the real tillers,” said Bhattarai.

Bhattarai’s remark comes in the wake of Prime Minister KP Oli’s claiming in his speech in parliament on February 15 that the process to reclaim Nepal Trust lands including those at Matatirtha was one of the achievements of the current government.

Bhattarai maintained that the decision made by his own government was not wrong as it was based on ‘facts and evidences’. He also said that it would be wrong to compare the lands transferred to tillers by his government with the Lalita Niwas land.

“Knowingly or unknowingly, we also decided at last. But the Matatirtha land transfer is a completely different issue and should not be compared with the Lalita Niwas scam involving the land mafia,” he said.

The former prime minister said that ‘Farmais Birta’ practice was in existence during King Mahendra reign and it was not abolished for a long time although the Birta system was abolished by the BP Koirala government in 2016 BS. He informed that the king re-registered the birta land in his name in 2026 BS leaving the tillers helpless.

Bhattarai wants properties of PM and ex-PMs probed
Bhattarai on Wednesday demanded a probe into the private properties of the incumbent and all former prime ministers.

Addressing the meeting of the House of Representative, Bhattarai urged lawmakers to initiate a serious investigation into the properties of incumbent prime minister and former prime ministers to find out who has accumulated how much through illegal means. “How can an ordinary man amass property worth billions and live in luxury once he becomes prime minister?” he asked. “Hence, I suggest the lawmakers to probe the prime ministers’ properties.”

Bhattarai, who also served as minister for finance in the past, claimed that the prime minister’s salary cannot afford him a life of luxury, huge bungalow and private cars. “There must be some hidden sources of income and it needs to be investigated,” he further said. Bhattarai also accused the government of promoting corruption and failing to maintain good governance in the country.

KATHMANDU, April 26: Devotees have started thronging at the Matatirtha pond at Chandragiri Municipality from early morning today on the... Read More...

Her community helped her summit Mt Everest, now she is paying back by hunting new trekking routes and promoting tourism in Helambu
12 hours ago