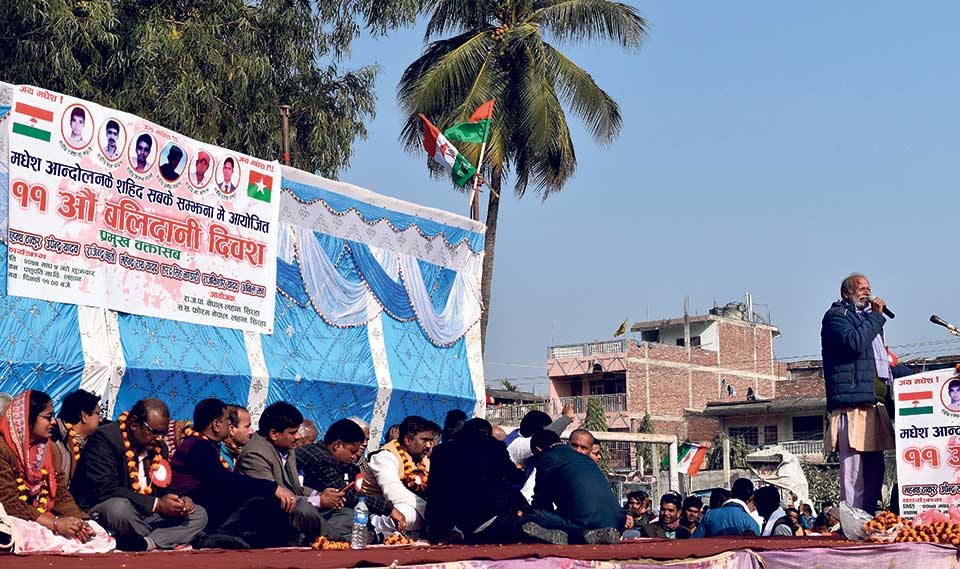 A function organised in Lahan on Friday to commemorate the Martyrs’ Day on the 11th anniversary of the Madhes Movement of 2007. Photo: Mithilesh Yadav/Republica

LAHAN, Jan 20: The Madesh Movement crossed a decade on Friday. The Madhes-based parties have been marking this day as Martrys' Day since the last 11 years. During the movement which broke out in 2007 demanding rights and fair treatment for the Madhesi people, Ramesh Mahato lost his life while fighting for the cause to become the first martyr of the movement.

Even this time, a formal program was held in Lahan to commemorate the Martyrs' Day. The people were expecting the presence of Federal Socialist Forum Nepal (FSFN) President Upendra Yadav and Rastriya Janata Party Nepal (RJPN) leaders during the ceremony. However, none of the top leaders of Madhes could be seen around. Except for Raj Kishore Yadav, a leader of RJPN, no other prominent leader was present during the function.

“My son was declared the first martyr of the Madhes Movement. We lost him in the fight for our rights. But now, he has been forgotten by those parties who claim to have been fighting for our rights,” lamented Mahato's mother. “I feel that my son's sacrifice has gone in vain. The leaders have no time even to mark the Martyrs' Day,” she added.

A huge, red colorful board was explicitly speaking of the role of Ramesh Mahato. It mentioned how he died for the people of Madhes and how precious was his contribution. The family members were simply numb while talking about him. Mahato's father said that the death of one's child never becomes an outdated issue. “We always remember him and we always recall that he died for Madhes. But we really feel bad that the leaders have nothing to do with this now,” he noted.

Madhes was on fire during the movement. The locals were fighting for equal rights and dignity. Mahato and many others had died during the protests. “Many fathers like me lost their children for some reason. They had dreams. They wanted peace, prosperity and dignity of our people in the long run. But to look at the attitude of the leaders here, we simply feel so disappointed,” the Ramesh's father Rabi said.

According to the martyr's father, the parities only took advantage of their sons who attained martyrdom during the Madhes Movement. Some new faces emerged as leaders after the struggles during the movement. Many of the even grabbed high posts, some became ministers, he said.

“But what have the Madhesi people got? Do our leaders really feel any change in Madhes? Are they ready to pave way for development and prosperity here? If you ask me, they are not even eager to bridge the gap between the rich and the poor, low caste and high caste. We are extremely disappointed to see that our leaders are only interested in holding on to power,” he fumed.

KHOTANG, Jan 10: A month after the successful completion of the parliamentary and provincial elections, the promotional tools and materials... Read More...

KATHMANDU, July 16: Jhanknath Phuyal, a permanent resident of Nuwakot, owns a house and a confectionary in Kathmandu. He and his... Read More...

TUTH will continue to provide health insurance coverage
16 minutes ago