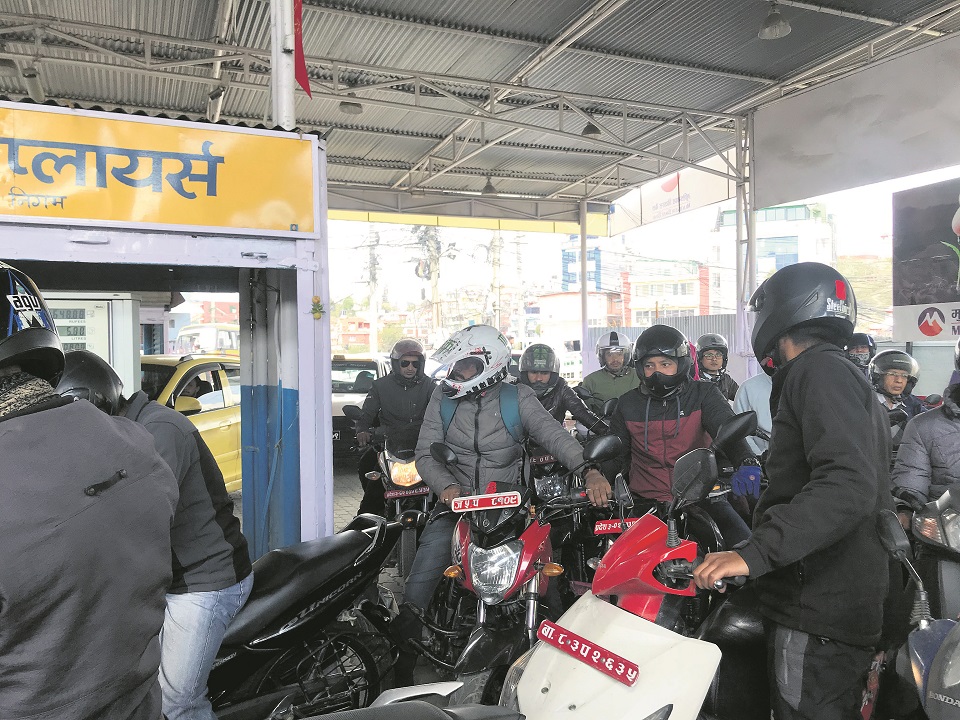 KATHMANDU, March 16: Most of the private petrol pumps in the Kathmandu Valley wore a deserted look, while those operated by Nepal Army, Nepal Police and Sajha Cooperative saw long queues on Sunday despite the government claim that there would be no shortage of petroleum products.

Officials of Nepal Oil Corporation (NOC), however, attributed the shortage to panic buying. Surendra Kumar Paudel, managing director of NOC, told Republica that there was sudden surge in demand on the day due to panic-buying.

As India has announced to impose restrictions at border points as part of its preparedness to contain coronavirus, people have started hoarding essential commodities fearing the repetition of 2015 blockade. Back in 2015, people had experienced acute shortage of petroleum products after India imposed blockade against the landlocked nation.

“It is normal for people to get worried about not receiving petroleum products and stocking them up,” added Paudel.

Paudel also attributed the sudden surge in demand to lack of sufficient storage capacity. "As private fuel stations have limited capacity, they run out of supply when they see sudden surge in demand like in past few days," he said. "People, however, should not be worried about the supply of petroleum products as we have managed to import in adequate quantity.”

According to NOC, India has not cut down on petroleum supplies to Nepal. It received 732 kiloliter of petrol and 1144 kiloliter diesel on Friday.

Recently, Indian government in a bid to check spread of coronavirus has announced to allow people's movement only through four border points – Birgunj, Bhairahawa, Kakarbhitta and Mahendranagar. Paudel claimed that the movement of fuel containers has not been affected with the recent move of the Indian authorities.

Private refueling stations also claimed that there was no shortfall in supply of fuel. Rajiv Sharma, owner of Puja Koti Petrol Pump at Mitranagar, Gongabu, said they were receiving petroleum supply from the NOC as in normal days. “We were also surprised by long queues at petrol pump," he added.

Motorists, however, accused the pump owners of creating artificial shortage. “As fuel prices have gone down heavily in the international market, there is the possibility price going down in the domestic market too. With the reason, petrol pumps might have declined to stock fuel to avoid possible financial losses to them,” Arjun Tiwari of Lagankhel, who was found in a queue at Devi Shakti Petrol Station in Lagankhel, said.

KATHMANDU, Feb 28: The government has decided to raise infrastructure development tax being levied on petroleum products by Rs 5... Read More...