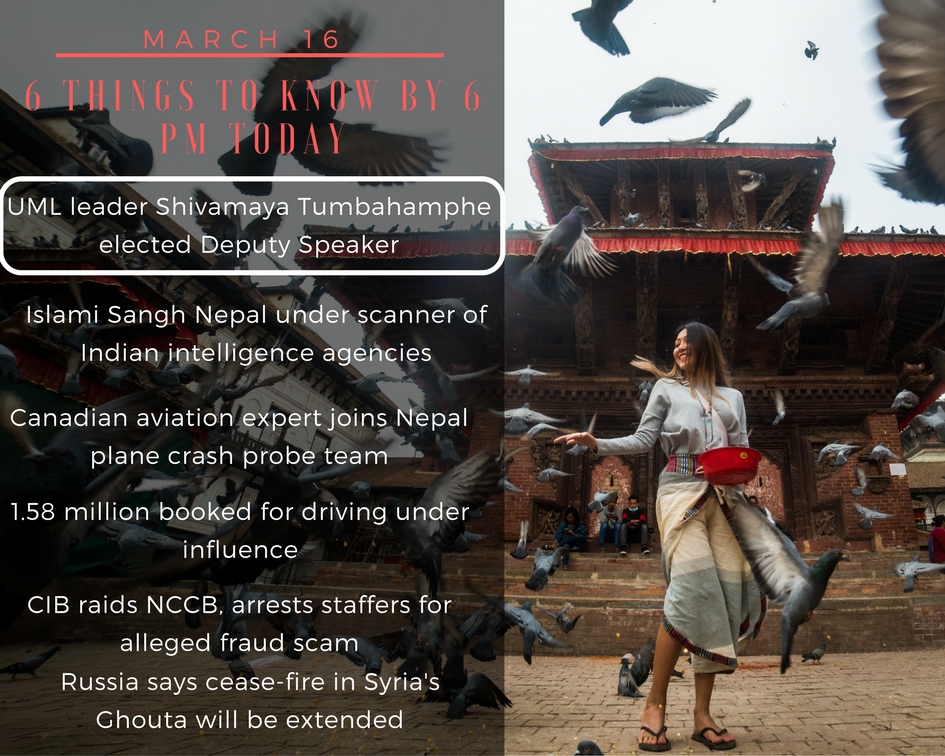 UML lawmaker Shivmaya Tumbahamphe has been elected as Deputy Speaker of the House of Representatives on Friday.

The Islami Sangh Nepal (ISN), a Kathmandu-based organization is under the scanner of Indian intelligence agencies for allegedly providing sanctuary to fugitive Indian terrorists. Two of the fugitives are involved in blasts and terrorist activities in cities, including Delhi, Ahmedabad and Mumbai.

A Canadian aviation expert has joined the probe body in Nepal to investigate into the plane crash of US-Bangla Airlines that was manufactured in Canada. The Civil Aviation Authority, Bangladesh is sending the black box of the aircraft to Bombardier in Canada to decode it and decide whether a technical glitch or human error caused the crash.

1.58 million booked for driving under influence

In the past five years, more than 1.58 million have been booked for driving under influence in Kathmandu. Likewise, 383 drivers’ licenses have been suspended in the same duration.

The Central Investigation Bureau (CIB) of Nepal Police arrested some staffer of Nepal Credit and Commerce Bank (NCCB) for their alleged involvement in embezzling around Rs. 2 billion during bank merger with Apex Development Bank.

Russia says cease-fire in Syria's Ghouta will be extended

Russian military and the Syrian government are extending a cease-fire in Damascus' rebel-held suburbs as long as it takes to allow all the civilians to leave the area. Thousands of civilians emerged from Hamouria and other towns to escape the onslaught on Thursday, the largest single-day exodus of civilians in Syria's civil war.