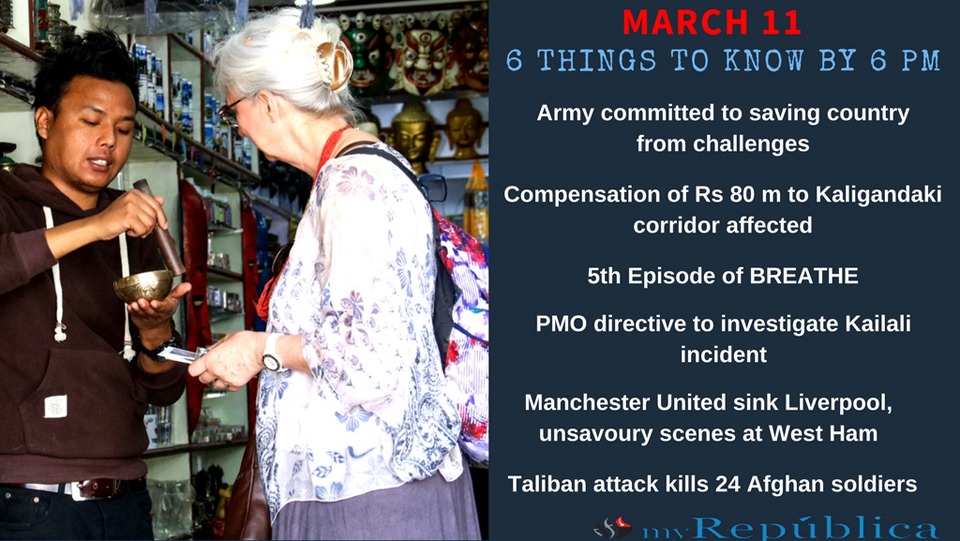 Chief of Army Staff Rajendra Chhetri today said Nepal Army is ready to deal with any situation, internal or external challenges that may befall the country.

A compensation of Rs 80 million is to be distributed to the households affected by the transmission line of national pride project Kaligandaki Corridor.

myrepublica.com is documenting how air pollution in Kathmandu valley is affecting its residents. Entitled BREATHE, the one-minute video content broadcast twice a week, Sunday and Wednesday.

The Office of the Prime Minister and Council of Ministers has directed the District Administration Office, Kailali to immediately investigate into the incident that took place at Ghodaghodi municipality-5 of the district and take against those found guilty in it.  18 year Radha Chaudhary, accused of being a witch was beaten for hours.

Marcus Rashford scored twice as Manchester United beat their arch-rivals Liverpool 2-1 in a highly-charged derby on Saturday to consolidate second place in the Premier League table.

At least 24 members of the Afghan security forces have been killed in a Taliban attack in the western province of Farah.