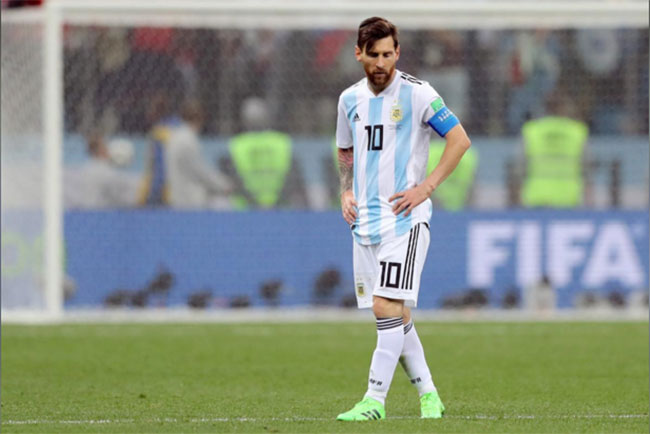 Diego Maradona has demanded access to Argentina's training ground in a bid to heal the rifts that have torn apart Jorge Sampaoli's squad.

The two-time World Cup winners are on the brink of going out of the tournament after a draw with Iceland was followed by a 3-0 defeat at the hands of Croatia.

And beleaguered boss Sampaoli has been at war with a number of his top players, including Manchester City striker Sergio Aguero.

Now Maradona – the man who led Argentina to their 1986 triumph in Mexico – wants permission to speak to the squad in a bid to lift their morale ahead of their decisive third group game against Nigeria.

Messi during the defeat to Croatia (Image: EPA-EFE/REX/Shutterstock)

Maradona said: “I played with my life whenever I got the Argentine shirt.

“I want to be able to talk to the players and make them understand what it means to wear the national shirt.”

Maradona is in Russia to support Argentina during the tournament.

Sampaoli called a clear-the-air meeting with his squad after Nigeria's 2-0 victory over Iceland on Friday left Argentina needing to beat the Africans in St Petersburg on Tuesday.

Argentine FA president Claudio Tapia addressed the players before Sampaoli, skipper Lionel Messi and vice-captain Javier Mascherano made an emotional plea for the squad to resolve their differences.

Aguero spoke out against Sampaoli following the defeat against Croatia when he suggested the Argentine coach didn't know what he was doing.

And there have been suggestions that several senior players have asked Tapia to sack the manager before the final group game.

Messi has looked a shadow of the player who arrived in Russia looking to prove himself as the world's finest footballer.

The Barcelona forward missed a penalty against Iceland and has looked short of confidence.

But Maradona has defended the man who now wears the No 10 shirt he once graced with so distinction.

He said: “Let's not pretend that you can win the cup alone. Leo has played as well as he could, but it is difficult to solve the problems of your peers. The kid is just not a leader.”