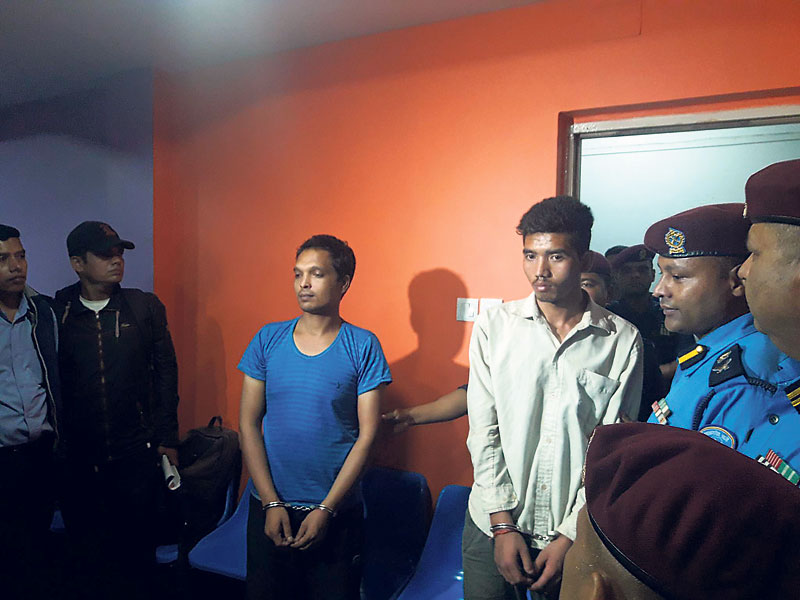 KATHMANDU, Sept 20: Former Maoist combatants were found involved in planting and detonating improvised explosive devices (IED) at various schools in the Valley early Tuesday morning, generating terror among the public all for the sake of 'easy money'.

Police have arrested two cadres of a little heard of Maoist outfit known as Maoist Communist Centre Nepal, for alleged involvement in planting and detonating the bombs at the private schools in Kathmandu and Lalitpur.

The Maoists were found to have set up their outfit in 2006 before the Maoist establishment signed the Comprehensive Peace Accord. But the outfit has not been registered with the Election Commission.

The two arrested have been identified as Shankar Lakhe, 31, of Dimipokhari in Ramechhap district and Chandra Bahadur Tamang, 24, of Lampangtar-6, Sindhuli district. Both are central committee members of the outfit.

Min Devkota, co-ordinator of the outfit's student wing, and  Suman Shrestha, co-ordinator of the Young Communist Force Nepal, another wing, have been identified as the masterminds behind the 'terror act', according to police. They have owned up responsibility for activities related to the targetted schools.

"Preliminary investigations show that the group, under the pretext of struggling against existing anomalies in the education system, has collected ransom from different private schools which they consider soft targets," AIG Thapa said adding, "We have identified about a dozen cadres of the group  involved in terrorizing the schools on Tuesday and they will be booked soon."

Police are preparing to charge the accused with organized crime.

[An improvised explosive device (IED) detonated at Akashdeep English School in Jorpati, Kathmandu blasted a hole in the wall of the school.(Upendra Lamichhane/Republica)]

Of the IEDs planted, two were set off by the cadres, three were diffused by security personnel and the rest were hoaxes. The improvised bombs were found planted at Radiant School at Sanepa, Lalitpur and at Kanchanjanga School at Dallu, Rai School, East Pole School and Bal Sansar at Bauddha, Akashdeep Boarding School and Manakamana Higher Secondary School at Gokarna and Ambassador School at Narayantar. The improvised bombs went off at the gates of Aakashdeep and Manakamana Schools, causing minor damage.

The IEDs were thought to have been installed starting at 3:40 am when there was only nominal presence of security personnel. Though the devices were all planted around the same time, police did not have a single clue.

Police found leaflets referring to anomalies in private schools and demanding free education for all.
Meanwhile, the two arrested and those absconding were found to have been involved in different criminal activities under the cover of politics in the past also.

Police said that Devendra Mahat and Keshav Dahal, president and general secretary respectively of the outfit, were allegedly involved in looting yarsagumba from Man Bahadur Chadara of Kalanki on  July 15, 2014. All of them were released on bail. Similarly, Lakhe was among eight arrested on the charge of torching a school van in Dallu on July 21, 2016. They were also released on bail, according to the police.

The Ministry of Education, private school operators and different institutions related to education have strongly condemned the targeting of schools and sought stern action against those involved.
"It was not wise to target schools for the sake of fulfilling political demand as talks could have been a medium to sort out the problems," the ministry statement reads.

2 bombs go off in Bhojpur Municipality