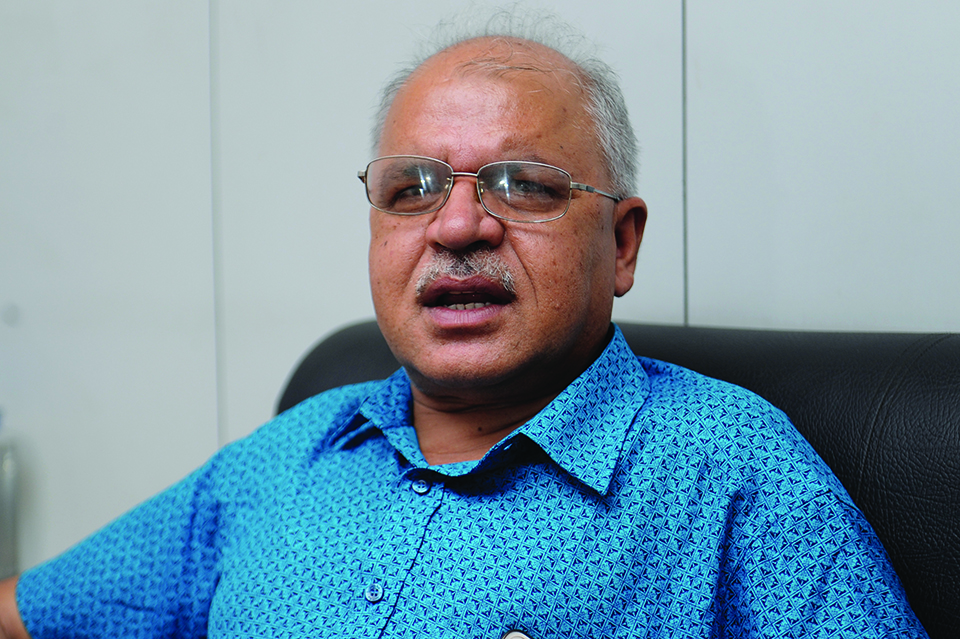 More than two months after rape and murder of Nirmala Panta, Nepal Police has not been able to identify the culprits and arrest them. Instead, very investigation process, including the DNA tests of suspects, has come under question. Where did this process go wrong? How should such investigations be handled? Professor Dr Harihar Wasti, Chief Consultant at Forensic Medicine Department, explained various steps of forensic and post-mortem investigation process in an interview with Mahabir Paudyal and Thira L Bhusal. Edited excerpts:

There are doubts, speculations and confusions regarding investigation process of Nirmala Panta’s rape and murder. In your view, what led to this situation?

In sensitive cases like this, people make various speculations. Sometimes even the right process is questioned and the wrong process tends to be justified as right. This is why such cases need to be handled very gently and carefully and the whole investigation process should not only be credible, it must also be seen as credible. If the experts are involved in the investigation from the very beginning, it makes many things easy. In Nirmala’s case I am not aware of who performed autopsy on her body. Was there a trained physician to do the job? Did he do the job thoroughly and impartially?  In such case, several samples have to be taken. Were they collected? How were they collected? Did they follow the standard procedures while doing that?

Then the samples and evidence collected should be well preserved. Did that happen in her case? Next, these samples have to be taken to the laboratories on time and they should be tested. Did they do that?

But how should investigation process ideally start in such cases?

Whenever crime against human body takes place, Scene of Crime Officer, also called SoCO, should go to the crime scene to collect the evidence immediately. SoCOs are well trained on principles of forensic science. When SoCO gets to the scene, he collects the evidence. Sometimes SoCOs alone won’t be able to collect the evidence from the ground. In that case, they call the experts like us. Such experts are taken to the scene of crime. If that is not possible, SoCos consult these experts and work according to the guidance provided.

But this is not what generally happens in Nepal. Usually the medical officer in the nearest hospital does what the experts have to and he does it according to his own understanding. The government of Nepal has not yet recognized the fact that medico-legal sector must be enhanced. Our doctors are not able to study such cases properly. I was reading about two different reports on a case of sexual offence in Janakpur. Doctors of one hospital claimed it was no sexual offence. The report of the other hospital claimed otherwise. Such cases happen because our doctors are not competent enough to look into these cases or they are not made competent. In Nirmala Panta’s case, her dead body was found a day after the murder. They must have spent a considerable time at the crime scene. The police could have called the experts for help or taken their council. They don’t seem to have done so.

What are the steps involved in the process of securing the evidence?

First of all, when such incidents happen, scene of crime should be secured. It should be cordoned off and no one should be allowed to get there. Then everything should be noted, recorded even photographed. These things need to be considered: How disturbed does the crime scene look? The state of clothes of the victims and everything around the scene should be recorded in muchulka (crime scene report). Some of the samples and evidence must be collected from the scene itself because once the body is removed from there some evidence might be lost. If the investigation is initiated late, it might be difficult to detect the stains on body, wounds and bruises.

Only then the body is examined to identify external and internal wounds, the cause of death and whether the evidence supports the cause of death. The person doing the autopsy should also be clearly informed about the records and findings of the crime scene so that he/she can correlate his/her own findings with those. But for this the doctors should be well trained, which is not the case in Nepal.

In Nirmala Panta’s case, a police staff is seen taking off trousers from Nirmala’s body and wash them off. Could this have destroyed the evidence?

I can say that the act of washing off trousers can remove or disrupt evidence in the trousers. The evidence in those trousers could have been washed off. The way all this was done shows there was no SoCO there. If SoCO was there he/she would not have allowed anyone to tamper with things which can possibly carry evidence. Even SoCOs only literate with forensic process would stop this. If a person does this deliberately or under the influence of something or somebody, it is a crime upon crime. To destroy the evidence is a crime.

How can common men help in preserving the evidence?

In Nepal, common men have contributed more to destroying the evidence than preserving it. People throng to the crime scene once they come to know about it. Some tend to move the body from one place to another. This disturbs the evidence marks. The footsteps of the criminals get effaced. The best the people can do when such cases are known is to report to the police, while keeping the crime scene secured.

DNA of four suspects has been tested and found negative. It has again raised people’s suspicion on police.

Results of DNA tests are mostly irrefutable. Such tests should be done by following certain protocols and it should be seen to have been done reliably. If the samples had been taken correctly the results do not lie, for DNA does not lie.

Questions have been raised around DNA test because it involves several issues such as: who took the DNA sample? Where was it taken from? Where was the test done?  And who tested it? In Nepal, we have only two places for DNA test: National Forensic Science Laboratory at Khumaltar and Central Police Forensic Science Laboratory at Samakhusi. The DNA report contains every bit of information. If one is not satisfied with the result of DNA test from one lab, it can be redone in another. If it was done in the right way, it will be tested negative in another lab as well, if it was done in wrong way, the second test will upend the result of the first.

One of the questions everyone is asking is why the test had to be done in Police Lab at a time when police itself is suspected of destroying the evidence.

Police lab is much more advanced than the one we have in Khumaltar. So they may have tested it in police lab. The lab at Khumaltar has not been updated much. Khumaltar does tests regarding identifying the parents. Most tests related to crimes are done in Nepal Police Lab.

In your career, have you come across any case similar to that of Nirmala Panta? Will you share your experience?

Yes, there is one. It was 20 years ago. And it relates to rape and murder of a girl who worked as a maid in the house of then Supreme Court judge Bhairab Lamsal. The girl, of 11 or 12 years, was brought to me for autopsy by the police. The police had gone to the crime scene and made a muchulka and declared that it was suicide by consumption of metacid. At first sight, it looked so. She was foaming in the mouth and it smelt of metacid. Her vagina was ripped. There was stain of blood flowing from between her thighs down to the feet. The stains had cluttered. The girl had no pubic hair but some strands of curly pubic hair were stuck in the bloodstain. And there were bruises around her neck.

First, I collected all the evidence and preserved them. I took vaginal swab. Then I examined the insides of her body and found that she had been strangulated. I called the police in Hanuman Dhoka but they did not respond. Then I called a Kantipur journalist and told him of the incident. This was my assessment. First the girl was raped, which led to excessive bleeding. But this did not kill the girl immediately so the criminal forced metacid poison on her mouth (some stains of scratch were seen around her mouth). The victim resisted but the poison affected her anyway. And she started to froth at the mouth. This would kill her anyway but it would take some time and therefore the criminal, fearing that others would come to know of it, strangulated her. The next day the story went viral.  Then the police started investigation again. The first investigation was totally flawed.

The first condition in providing justice to the victims in such cases is that every actor involved in the investigation—police, doctor, judges, forensic experts—should be honest. I could have certified that the girl died of metacid consumption and it would be believed in.

In the course of second investigation, the sperm that was collected from swab was sent for test in Hyderabad. We had no DNA test system in Nepal in those days. When the report came, two persons were suspected: the son of Bhairab Lamsal and the person named Samod Mandal, who was a servant in the house. Later the blood of both was tested, and Samod Mandal’s DNA test showed positive.  Mandal was imprisoned.

When I read about Nirmala Panta’s investigation, I remember this case from 20 years back.

Finally, what should be done to make forensic investigation and DNA test more reliable?

First of all, it has to be recognized that in cases of crime against human body, medico-legal test is indispensable and that it brings out vital evidence in many of the cases. The state actors do not seem to have realized this. The state should keep the institutions, which are involved in evidence tests, postmortem etc, up and running. They need to be equipped with basic infrastructures and equipments.  In other words, the state must address the medico-legal sector. We need enough specialists in all places.

Second, this kind of investigation is a team work. We cannot only blame the police. We need enough SoCOs on the ground. They need to be fully trained and they should discharge their duty honestly. And we need to get the forensic experts on the crime scene. In fact, this should be made mandatory.

Third, we need to develop forensic lab as an independent unit.  The one Khumaltar has become almost defunct. We need qualified human resources to work in this unit. Business as usual won’t work.

Fourth, on procedural part our laws are not clear as to who should do what. Our law does not make it mandatory for the victim of rape or forceful sexual assault to be examined in the hospital. When we leave such loopholes, problems are bound to occur.

Finally, journalists should also be responsible. They should not give their own verdict while the investigation is still going on. I see the increasing trend of the media disseminating its own judgment instead of reporting the truth. This should be stopped.