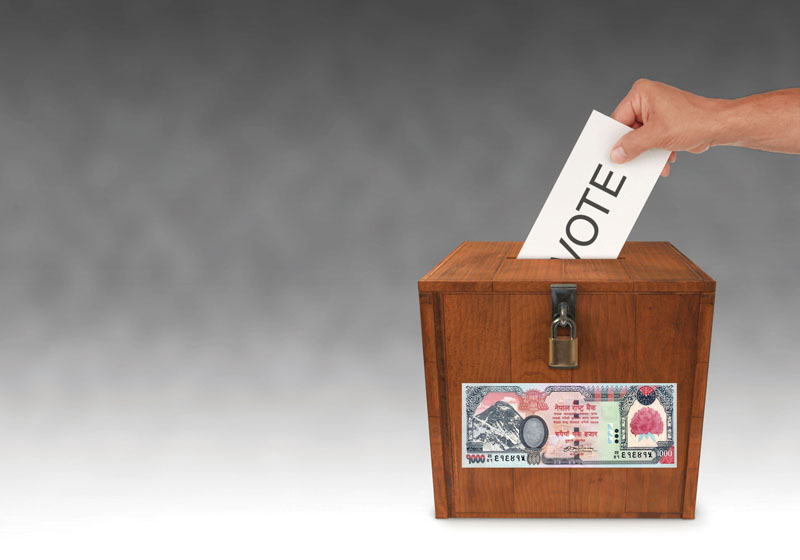 The issue of electoral financing has been a hot topic of late. It deals with the cost of election and its subsequent impact on democracy, and is also related to political corruption and values of democracy: issues of transparency and accountability in particular.

Nepali political parties are often blamed for not revealing their actual election costs. This lack of financial transparency is responsible for ‘democracy deficit’ in the parties.

This has been an ongoing debate in Nepal since the 1990 political change and yet there have been no substantive initiatives to make parties more financially transparent and accountable. In this article I argue that this is due to policy deficit.

Clientelism seems beneficial for winning election but it ultimately undermines institutionalization of political parties. It also hinders establishment of horizontal links based on common interests. Clientelism encourages rent-seeking, for instance mobilization of youth gangs during election. It also disadvantages women candidate because they do not have equal access to financial resources. And most importantly, as few women are in positions of power, they cannot influence party cadres in their favor.
Informal funding promotes family and personal accountability and undermines public accountability. For instance, an elected candidate who wins on the basis of money and muscle will be more accountable to those who helped them win rather than to the electorate. Informal funding also creates problems with transparency. For example, if someone makes a big donation of rice in a feast organized for party cadres, legally neither the donor not the party is obliged to keep records.

The electoral regulation does not oblige parties to record funding of less than Rs 100,000 and election costs are mostly covered through informal funding. Since such informal funding mechanisms are quite common in rural areas, failure to cover it in electoral laws is a case of serious oversight.

I believe our electoral laws should reflect the realities of Nepali society rather than some hoped for ideal. Only then will we have truly free and fair elections.

Most Nepali migrant workers in Portugal don’t have legal papers or are working in precarious jobs ... Read More...

KATHMANDU, June 12: A new study has said around 27 percent of children who are working as child laborers at... Read More...