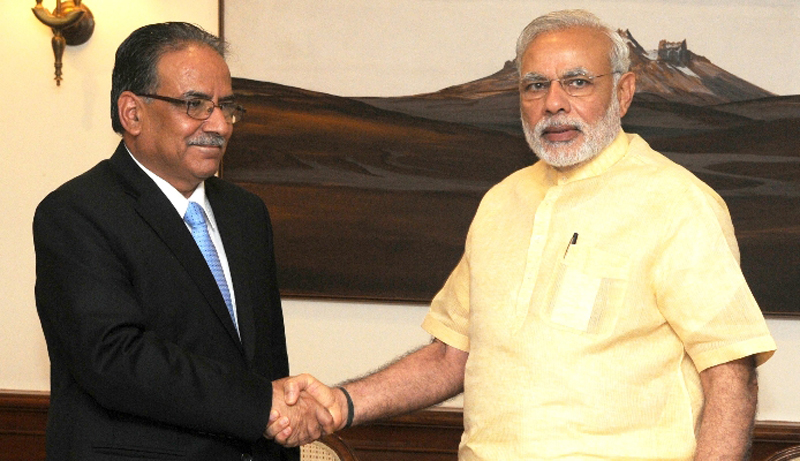 It is natural to expect India to support the democratic process in Nepal and let it evolve as a broad-based internal process
Prime Minister Pushpa Kamal Dahal is paying an official visit to India this week. This will be his second visit to India as prime minister, his first visit coming in 2008 after he became prime minister for the first time. He now says he is a transformed person, and has become “politically mature”. He claims that he understands the “compulsions of competitive politics”. He often quotes GP Koirala, who guided him into peaceful politics, as telling him: “When you get lost in the jungle you return to where you started the journey”. Having come to peaceful politics from a violent path, it is yet to be seen whether he has fully realized the value of democratic process, which alone will secure the future of people and the country.

The multifaceted and precious relations between Nepal and India deteriorated after the promulgation of a democratic constitution written by people’s representatives in the Constituent Assembly (CA) on September 20th, 2015. The constitution was endorsed by 90 percent of CA members. India, which had supported a federal democratic republic Nepal, issued three statements on the situation in Nepal on September 19th, 20th and 21st. It ‘noted’ the promulgation of a constitution and argued that all sections of Nepal must reach a consensus on political challenges confronting them.

Because of “misunderstandings over the constitution”, India imposed an unofficial economic blockade on Nepal, which lasted for about five months. It remains inexplicable to this day why the largest democracy chose to react the way it did when Nepal made a definite march towards democracy.

Prime Minister is the leader of the country. He carries the trust and confidence of the people with him on his visits abroad. But the people view their leaders as untruthful and untrustworthy, warning them not to seal any deal with India that is against the interests of national sovereignty and integrity. In one of the City Hall meetings organized to advise the prime minister on his India visit, the prime minister said he would try his level best to remove problems in Nepal-India relations, based on trust and mutual understanding, for the ultimate benefit of Nepal.

In his address to the Constituent Assembly of Nepal on August 3rd, 2014, Indian Prime Minister Narendra Modi had compared the mainstreaming of Nepali Maoists into peaceful politics to the path Emperor Ashoka of India had adopted in renouncing violence and embracing Buddhism (“Yuddh se Buddh ki oor”). Prime Minister Modi congratulated those who had left behind the bullet in favor of the ballot, shunned the path of violence, and embarked on peaceful politics. In one stroke, he created a new momentum in Nepal-India relations and erased old misunderstandings. Nepal’s prime minister, during his India visit, should try to reestablish India’s trust and confidence for Nepal’s dignity that Prime Minister Modi spoke of during his Nepal trip.

The future of Nepal and the dignity of its people are inextricably linked to the destiny of democracy. The active participation of Nepali leaders, led by BP Koirala, in the Indian independence movement and India’s support and solidarity for  all historic democratic changes starting from 1950s demonstrate how the two countries and the two peoples trust each other and respect each other’s sovereignty and independence. The present visit is expected to enhance the dignity of Nepali people, enabling them to make their own decisions and secure the destiny of democracy for the country’s peace, progress and prosperity.

India has been first school of democracy for Nepalis. It is a matter of great pleasure that even in midst of a hostile environment, India has remained a shining example of democracy, upholding the values of human dignity and freedom. We have learnt from India that democracy is a powerful glue to hold a socially diverse people together and an instrument for settling irreconcilable differences through peaceful means.

Despite many ups and downs, Nepal has moved along the democratic path. It is but natural to expect India to support the democratic process in Nepal and let it evolve as a broad-based internal process taking every section of the society on board. We have realized that democratic institutions are indispensible vehicles for ventilating grievances.

Though democracy is not without discontents and dangers, it alone provides a foundation of inclusive nationalism in place of the knee-jerk jingoism that was witnessed in actions of the previous government.

The World Affairs Journal mentions Nepal as a surprising focal point for global movement for democracy despite its many problems. This fact has often been overlooked by national and international audiences.  The challenges before us today are unprecedented, with a combustible mix of growing unemployment, public disillusionment and distrust of political leaders.  But given the resilience of the people with their “cheerfulness of soul” for engagement and their commitment to democratic pluralism, Nepal presents a source of hope at a time the momentum for global democratization is facing a setback.

Nepal—the birthplace of Lord Buddha—is strategically located between Asia’s two powerful giants, India and China. It is in the radar of the emerging and established powers because of its strategic location. Despite the tortuous process of transition, Nepali leadership must do a tight rope walk and show wisdom and skills in managing sensitive geopolitics to put the country on the path of peace, progress, and prosperity within a democratic framework.

The World Bank reveals that the South Asia is the fastest growing region in the world with economic growth projected to move from 7.1 percent in 2016 to 7.3 percent in 2017. India remains at the center of this progress. China’s progress has been a singular success story of the twentieth century. It was able to lift 660 million people out of poverty in just 30 years. Despite this economic dynamism in the neighborhood, and with a market of over 2.5 billion people at its doorsteps, Nepal has been unable to leverage its rich natural resource base and strategic location due to the prolonged transition.

We need to work closely with our neighbors and friends in the international community and to put in place a functional democracy with people at the center of governance. This alone will help create trust and build a ground to harness the potential of Nepali people. A peaceful, stable, democratic and prosperous Nepal will also be a stabilizing factor for our neighbors’ continued progress as well as for global peace, security and prosperity.

Fernandinho hopes City can bounce back against Liverpool