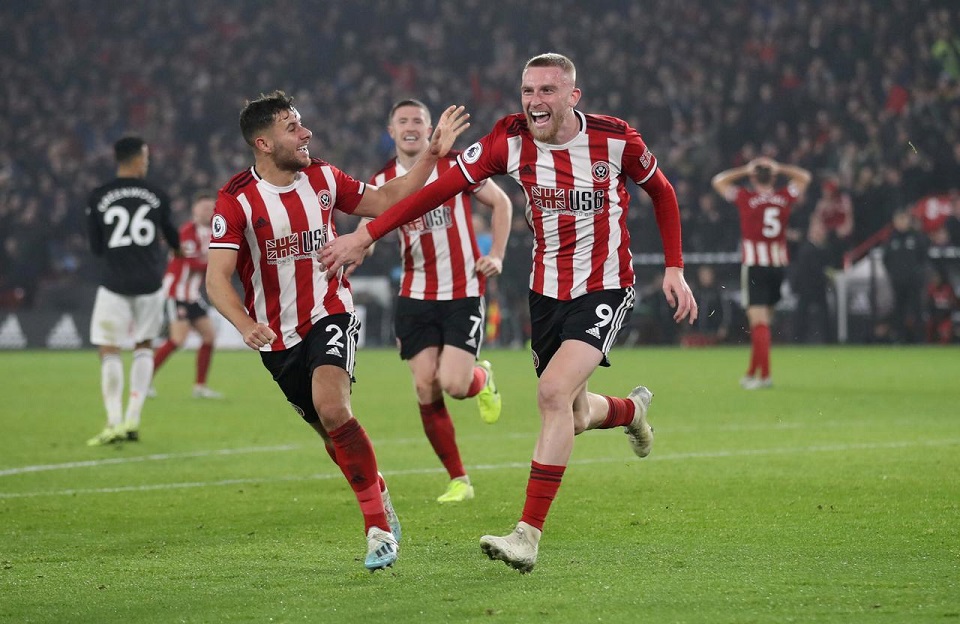 SHEFFIELD, ENGLAND, Nov 25: Oli McBurnie’s stoppage-time equaliser earned Sheffield United a 3-3 draw against Manchester United at Bramall Lane in the Premier League on Sunday after the visitors had been on the verge of a thrilling comeback victory.

Coming into the contest on the back of one win in their last 10 Premier League away games, either side of the summer, Manchester were immediately on the back foot and had goalkeeper David de Gea to thank for keeping them in the match early on.

They could not hold out for long, though, and John Fleck bundled home the opener in the 19th minute after De Gea had denied John Lundstram.

The home side did not relent, creating plenty more openings and pressing their opponents at every opportunity. Seven minutes after the interval they went 2-0 up, with Lys Mousset drilling home his fourth goal of the season.

United looked dead and buried as they struggled to get back into the contest after the break but 19-year-old Brandon Williams’s first senior goal 18 minutes from time sparked them into life.

Another academy graduate, Mason Greenwood, came off the bench to level things up five minutes later, before Marcus Rashford completed the turnaround in the 79th minute with a fierce strike, earning United a possible win reminiscent of the Alex Ferguson years.

However, substitute McBurnie denied the visitors in stoppage time to add a further twist to the breathless encounter, squeezing a strike past De Gea, with the goal awarded after a lengthy VAR review.

“This team don’t give in — such a difference from last year to now.”

With Blades goalkeeper Dean Henderson, on loan from Manchester United, ineligible, Simon Moore was given his first ever Premier League start for the home side but he was a bystander in the opening 45 minutes as all the action was down the other end.

De Gea twice in quick succession rescued his side in the 11th minute but he was powerless to prevent Fleck from breaking the deadlock.

Phil Jones had a difficult time on his first Premier League start of the season and his inability to deal with Mousset lead to the opener, with Lundstram denied by De Gea only for Fleck to bundle home the ball.

The Blades had five shots on target in the first half, two more than in any other match this season, and continued where they left off after the break, with Mousset capitalising on slack play from Andreas Pereira before drilling into the net.

Half chances came and went for the visitors but Williams’s well-taken strike as he arrived late at the back post gave his side hope.

Given the Blades had not conceded in the final 15 minutes of a league game this season, the looming Manchester United victory looked all the more impressive.

However, it was not meant to be as McBurnie controlled and fired into the net in stoppage time, with VAR unable to come to Manchester United’s rescue.

“They were 2-0 down and we were in control,” Sheffield United manager Chris Wilder said. “I am little bit disappointed. We might get undone a couple of times and we got undone today but we came roaring back.”