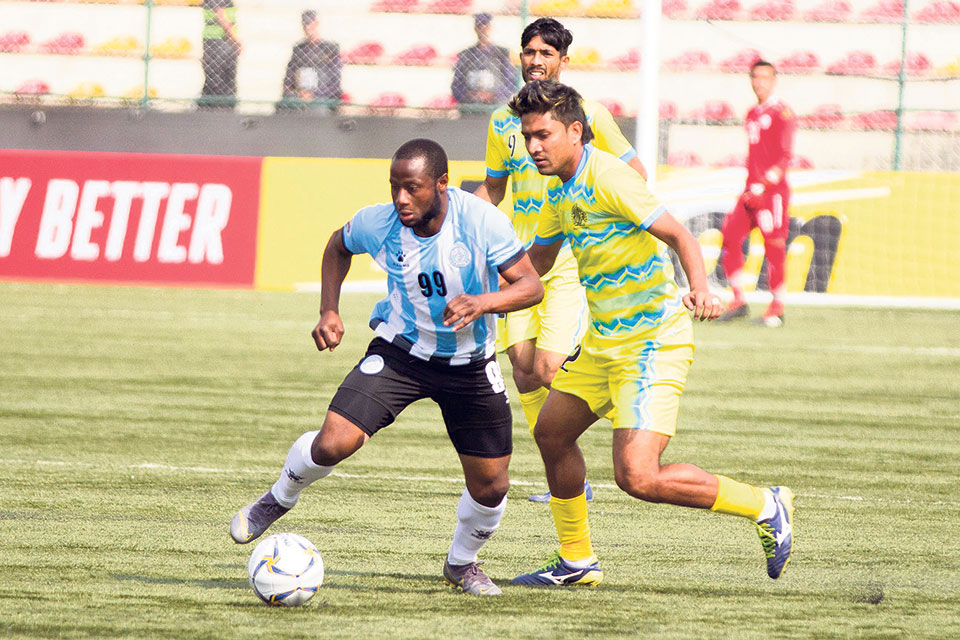 KATHMANDU, April 4: A-Division League champion Manang Marshyangdi Club made a poor start to its 2019 AFC Cup campaign suffering a 1-0 defeat at the hands of Bangladesh’s Abahani Limited Dhaka in Lalitpur on Wednesday.

In its first group match played at the All Nepal Football Association (ANFA) Complex in Satdobato, center back Masih Saighani scored the only goal of the match in the 28th minute which left Manang frustrated and unable to open the opponent’s defensive line.

Saighani scored a good header from near the post after receiving a cross from Rubel Miya.

It was one of the worst attacking performances from Manang, which has not been able to win any domestic level tournaments after clinching the Martyr’s Memorial A-Division League, as it could not utilize its superior possession and chances to goals.

Despite having a good start in the initial period, Manang failed to capitalize on its passing play as it struggled in the final third as strikers Afeez Olawale Oladipo and Somide Oluwawunmi could not get the ball as Manang prioritized long balls which were easily prevented by tall Abahani defenders.

Abahani, however, looked confident in the final third cutting out Manang defense with clinical passes from the midfield, which was the problem for Manang as it tried to go from the flanks. Abahani utilized its chances with counter attacking tactics.

Both the teams got plenty of chances throughout the game, but could not utilize them. Manang had most of the chances either blocked by the defenders or stopped by captain goalkeeper Mohammed Sahidul Alam, while Abahani without controlling possession utilized its chances and scored a goal, while an effort hit the post.

Manang got a real opening for the goal in the sixth minute as Olawale dummied the ball to Bishal Rai, but shot went a whisker away from the post.

Rai was again in the thick of things as he passed the ball to Anjan Bista near the edge of the box. Bista took the ball a bit forward inside the box, but his shot was brilliantly saved by Alam in the 13th minute.

Manang was pressurizing the Abahani post again as Sujal Shrestha hit a free-kick from outside the box in the 22nd minute, but the ball went frustratingly over the bar.

Then, Manang was hit by a setback as Saighani brilliantly headed in the ball in the 28th minute giving no chance to Manang keeper Bishal Shrestha.

Manang looked a bit disappointed as it conceded the goal having been dominating the game.

But, Manang wasted no time in going forward and created a good chance again. Captain Biraj Maharjan gave a good cross into the far post to Bista, but he did not show flexibility in his header and the ball went wide in the 37th minute.

Kervens Fils Belfort got a real chance to double the score in the start of the second half as he passed the ball to Sunday Chizoba Nwadialu, but his shot went just wide of the right hand post in the 49th minute.

Manang got another opportunity to score in the 54th minute as Rai hit a free-kick from the edge of the box, but the ball was punched away to safety by keeper Alam, while Bista’s shot from outside the box nine minutes later grazed over the bar.

Devendra Tamang nearly cost Manang a second goal as he led the ball near the box to Mohammad Nabib Zibab. Zibab dribbled the ball straight to the Manang defense and hit a curling shot which hit the post, and the rebound hit by Miya whiskered away from the post in the 80th minute.

Substitute Bimal Rana hit a shot from outside the box, but the ball went wide in the second minute of three minute injury time, while Kamal Shrestha gave a good cross to Rana in the far post, but his header went wide again in the last injury time minute.

The top team of Group E will reach the inter-zone play off semifinals. All the teams will play a total of six games.

Manang coach Chhiring Lopsang Gurung said that even though his team had better attacking displays, it lost because of one easy goal from the opponent.

“We had better movement and attacked more. We were down because of that one chance they got which they utilized and got an easy goal,’’ Gurung said, “We will try to improve from the mistakes in the coming games and move forward.’’

Abahani Portuguese head coach Mario Lemos said that his players worked very hard against a good team and the team settled the game in the second half.

“We struggled in the first half, and adapted properly in the second. We played well and scored the only goal. We had chances we should have scored from, but could not. It was a very hard game and I had picked good players to play for this game,’’ Lemos said. “I am very happy with the three points.’’

Apples worth Rs 500 million exported from Mustang
2 minutes ago