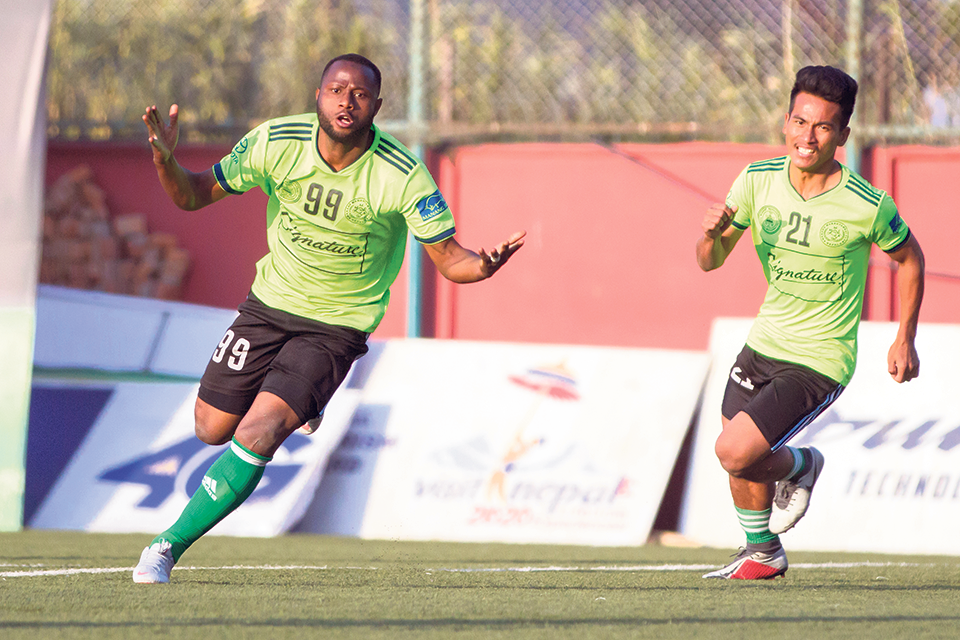 KATHMANDU, Dec 11: Manang Marshyangdi Club has extended its winning run to seven games consolidating its title winning bid by a slender 1-0 victory over Macchindra Club in Lalitpur on Monday.

At the All Nepal Football Association (ANFA) in Satdobato, a late goal from substitute Afeez Olawale sealed the seventh win for Manang as no team has been able to defeat Manang in the league so far.

The goal came late in the game five minutes from time as Manang played passing football from the left to the right side with Bishal Rai passing the ball to Bimal Rana, who was outside the danger box. Rana then provided a diagonal ball to Victor Kahmuka, who got a cross inside the box looking for Olawale and he controlled the ball and scored with his left foot despite being surrounded by two Machhindra defenders.

Olawale had come in place of Dona Thapa in the 59th minute and his entrance provided Manang the much needed attacking flair.

The win for Manang could be an important one in the league season as it is going to face the other title contender the departmental team Tribhuvan Army Club in the next round.

After the hard-earned victory over Machhindra, Manang has gone three points clear at the top of the table off second-placed Three Star Club and third-placed Sankata Club. Winning all its seven games, Manang has accumulated 21 points, while Three Star and Sankata have 18 each. Machhindra is 13th with three points from the same number of games. Machhindra is winless so far and garnered those points from three draws.

Despite failing to score, Manang got several chances in counter attack, but could not convert them. Manang was awarded the penalty in the 70th minute after Saheed Gbenga Anifowose fouled Adelaja Somide inside the box, but Anjan Bista’s spot kick was brilliantly saved by Machhindra keeper Deep Karki.

Manang was awarded other opportunities in the match in which Bista was in the thick of things. Bista’s shot in one-vs-one in the eighth minute was also saved by keeper Karki, while Bista’s strong 37th minute strike was denied by Karki. Bista was also denied by Karki two minutes away from the first half interval.

Saving most of the Manang chances, Karki was named the man-of-the-match.

Right from the start of the match, Machhindra played defensive football, but its strategy to snatch two points from Manang was unsuccessful conceding late in the match.

Despite its tactics, Machhindra had created a couple of chances in the match. Machhindra was awarded a free-kick after a Bista handball, but it could not convert from a set piece. Machhindra tried to pull a goal back near the end of the game, but could not score.

In the other match played earlier on the same day, Army defeated struggler Brigade Boys Club 1-0 to keep its unbeaten run intact.

Army, who is also in the title contention, took the only lead in the match in the 66th minute through Tanka Basnet.

Army played attacking football from the start in the match creating many chances, but failed to convert them. Tek Bahadur Budathoki crossed the ball from the right side of the penalty box, and the ball was headed in by Basnet to give Army the lead. Army created some more chances in the remaining time, but failed to score.

Army, who again had to play with its main striker Nawayug Shrestha, has won five and drawn its other two matches. Shrestha has been staying off the pitch because of a heel injury he faced some weeks ago.

With the win, Army has stayed in the fourth position with 17 points, while Brigade Boys in 12th with four points.