Manang back in title contention after beating Sankata 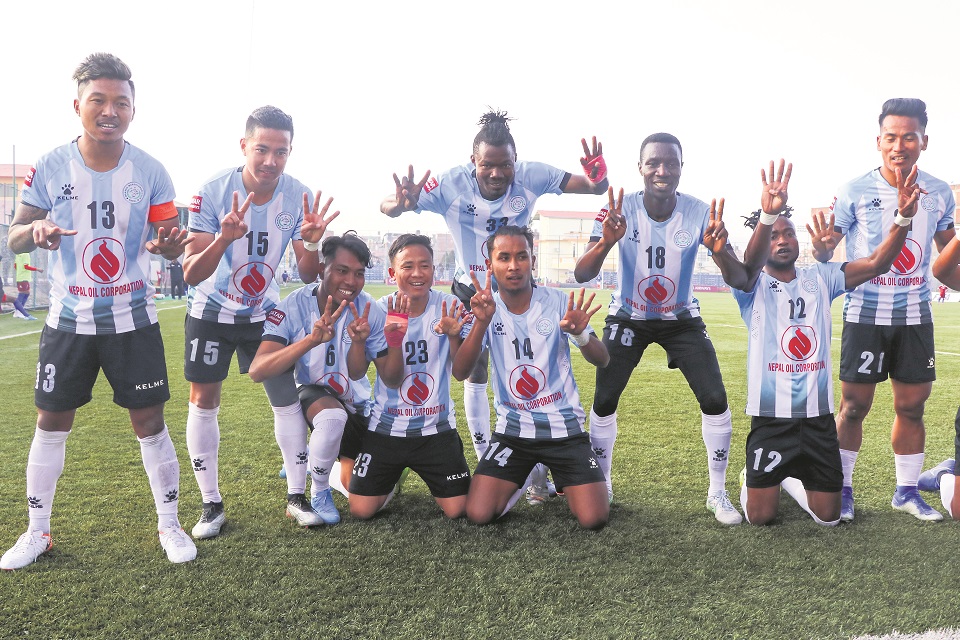 Players of Manang Marshyangdi Club pay tribute to late NBA great Kobe Bryant, who, along with his 13-year-old daughter Gianna, died January 26 in a helicopter crash, during their Martyr's Memorial A-Division League football match against Sankata Club at the ANFA Complex in Satdobato, Lalitpur on Wednesday.

KATHMANDU, Jan 30: Manang Marshyangdi Club closed the gap on leader Tribhuvan Army Club after a stunning 3-0 victory over Sankata Club, as the win came as a statement that the holder isn’t out of the title race in the ongoing Martyr’s Memorial A-Division League in Lalitpur on Wednesday.

After some mid-season blips with four consecutive draws stretching from its fourth matchday to the seventh, it has won two matches on the trot defeating Saraswati Youth Club 1-0 and now Sankata. Despite being in the third, Manang has the  same points as Machhindra Club (19), and has only conceded in three games.

In the only game of the day at the All Nepal Football Association (ANFA) Complex in Satdobato, goals from Anjan Bista and Nishan Limbu along with an own goal from Amit Tamang sealed a convincing win for Manang, who has now got its goal difference to +8.

Manang dominated Sankata throughout the match in terms of good passing display, high press and wing play. Sankata had most of the ball with more shots taken, but Manang had the clinical shots on target with its six out of eight shots in the Sankata post.

The first real chance of the game came in the fifth minute as Bista hit a shot from just outside the box, but it was blocked by Sankata captain Ravi Silwal. The rebound fell to the path of Limbu, but his shot went wide off the target.

Limbu got another chance as captain Kamal Shrestha crossed the ball, but his shot went over the bar in the 35th minute.

Sankata got a chance to score, before Manang drew the first blood, as Massouke Ltiegnie Oloumou Pierre Gean Marie hit a shot in the 40th minute, but it was saved by Manang keeper Deep Karki.

Then Manang scored two goals in the space of two first half minutes. It was Sankata’s Amit Tamang who gave Manang its first goal as he sent the ball to his own net after he failed to clear the ball in the 42nd minute.

Bista then doubled the score for Manang within a minute as his shot went into the bottom corner rounding off the Sankata goalkeeper Binaya Shrestha.

There was not much action after that, and Sankata could not produce anything in the four additional minutes.

It was more of the same from Manang in the second period as it absorbed the Sankata pressure and hit the team on counter attack utilizing its wingers Bista and Limbu.

Bista hit a shot in the 53rd minute, but it was saved by keeper Shrestha. Bimal Rana got the follow-up chance to score, but he was caught offside.

Sankata got a rare chance two minutes later from a free-kick, but a shot from Laxman Ruchal went over the bar.

Manang finally scored the third goal to destroy all the hopes for Sankata as Limbu scored a brilliant goal. Limbu took a shot from a difficult angle and placed the ball superbly into the right hand corner giving keeper Shrestha no chance at all to save it in the 71st minute.

There was no further action after that and Manang bagged a decisive win which came after a display of brilliant team performance in both attack and defense. It has now conceded only five goals in nine league games, joint-second lowest in the tournament so far with only Army conceding fewer (3).

With the result, Manang, with five wins and four draws, has accumulated 19 points and still is in third behind Machhindra, but both have the same points.

Manang and Machhindra have same points, same goal difference, same goals for and same goals against, but Manang is behind because of more cards conceded. However, they both are a point behind Tribhuvan Army Club.

Likewise, Sankata is in the ninth place with 12 points consisting of three wins, three draws and three losses.

On Thursday, Friends Club will face Chyasal Youth Club in the clubs’ bid to get out of the bottom half, while New Road Team (NRT) will hope to get to the fourth place displacing Three Star Club and Nepal Police Club with a win against Brigade Boys Club as both of the teams have 14 points each, while NRT has 12 so far.

RSP Chairman Lamichhane warns of quitting govt if the party is denied home ministry
3 hours ago
UML in favor of reinstating Lamichhane as Home Minister, Maoist Center opposed to the idea
14 minutes ago

No decision on home ministry leadership until full text of SC’s verdict on Rabi Lamichhane is out: PM Dahal
27 minutes ago

Pokhara-Baglung Highway to be closed for upgrading
44 minutes ago