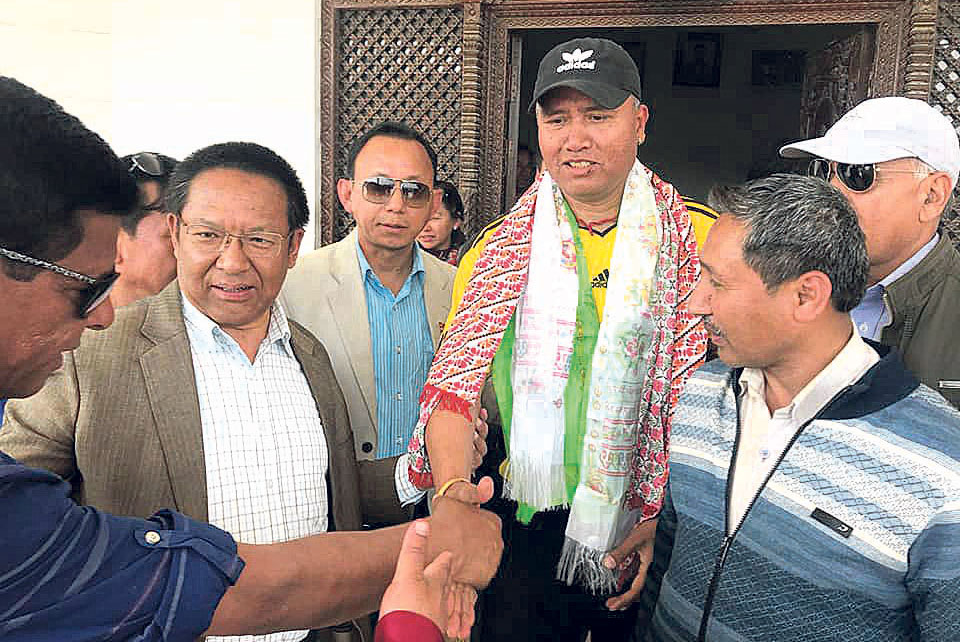 Rajesh Manandhar is congratulated after being elected chair person of the National Footballers’ Association at the ANFA head office in Satdobato, Lalitpur on Tuesday. Photo Courtesy: Facebook/Rajesh Manandhar

KATHMANDU, March 21: Rajesh Manandhar has been elected as the Chairperson of the National Footballers’ Association on Tuesday. The former footballer Manandhar defeated Anil Gurung, a Laxmi Hundai Manang Marshyangdhi Club striker, with a margin of four votes in the election held at the ANFA head office in Satdobato, Lalitpur.

Manandhar received 16 votes while Gurung, who called time on international career a few months back, obtained 12 votes. Manandhar was supported by a number of former footballers whereas Gurung was backed by the present national players.

Manandhar’s candidacy was validated as per the statute of National Players’ Association which has a provision that allows former footballers to become members of the Association.

Footballers who were included in the national squad after 2010 and medal winners of SAAF before 2010 (who have not acquired the coach license) were eligible to vote in the election. However, only 29 members took part in the voting. One vote was invalid.

Although, Gurung lost the race for the position of chair, his panel secured majority in the remaining positions namely vice-chair and members. National football team members Biraj Maharjan, Bikesh Kuthu and Sujan Shrestha were elected as the vice-chairs of the association. They received 16 votes each.

Likewise, National team forward Nawayug Shrestha, Bishal Rai, Anjan Bista, Bimal Basnet, Heman Gurung, Kamal Shrestha were elected members of the association. All the elected members got 16 votes each. Babukaji Dhoubanjar and Dinesh Shrestha, who are from Manandhar faction, secured 16 and 15 votes each.

POKHARA, Oct 29: A new Working Committee of Tourist Bus Association – an organization of tourist bus entrepreneurs has been... Read More...