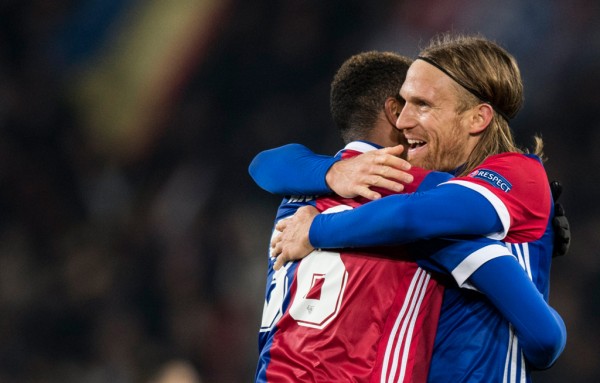 BASEL, Nov 23: Manchester United missed a chance to reach the Champions League knockout stages with a match to spare for the first time since 2014 after a late goal condemned them to a 1-0 defeat at Basel in a pulsating Group A clash on Wednesday.

Midfielder Michael Lang tucked in an 89th-minute winner for the Swiss side after Raoul Petretta found him with a pinpoint low cross at the far post, giving United’s stand-in keeper Sergio Romero no chance.

Basel’s late triumph created a complicated scenario ahead of the last round of games but United are still almost assured of progressing.

They need only to avoid defeat by more than six goals at home to CSKA Moscow to be sure of avoiding an embarrassing relegation to the second-tier Europa League, which they won last season.

United are still top of the section with 12 points from five games, three ahead of second-placed Basel and third-placed CSKA, who kept alive their hopes of reaching the last 16 with a 2-0 home win over Benfica earlier in the day.

United defender Daley Blind blamed himself for Basel’s late winner, saying that he had been too late in covering the dangerous Lang.

Yet his manager Jose Mourinho, frustrated that his side had not completed the job and complaining that United had wasted the chance to be five goals ahead by halftime, was adamant the Dutchman should not be made a scapegoat.

“It is not fair for Blind to blame himself. He had a very positive game. We have to blame everyone on the pitch because we had so many chances,” Mourinho said.

“We don’t need to win the (final group) match, we don’t even need to draw, but obviously we will try to win.”

United hit the woodwork twice as they controlled the first half, with Anthony Martial shaving the outside of the post with a cross while Marcos Rojo’s deflected long-range effort cannoned off the crossbar.

Basel keeper Tomas Vaclik denied Romelu Lukaku with a fine save and Marouane Fellaini saw his header cleared off the line by Manuel Akanji as United pinned back the home side in the opening 45 minutes.

The tide turned after the break as the home side came out with all guns blazing, with right-wing Renato Steffen firing just wide after a solo run while Lang’s header from a tight angle hit the bar.

With United fading, Basel sensed blood and Rojo had to make a last-gasp clearance in front of Dimitri Oberlin before Romero kept out a Serey Die piledriver.

When United appeared to have sealed their progress, Petretta squared an inviting pass across the face of goal and Lang popped up at the far post to send the fervent home crowd into raptures.

Jan 27: Debutant Alexis Sanchez had little trouble adjusting to his new place in Manchester United’s line-up as he assisted the... Read More...