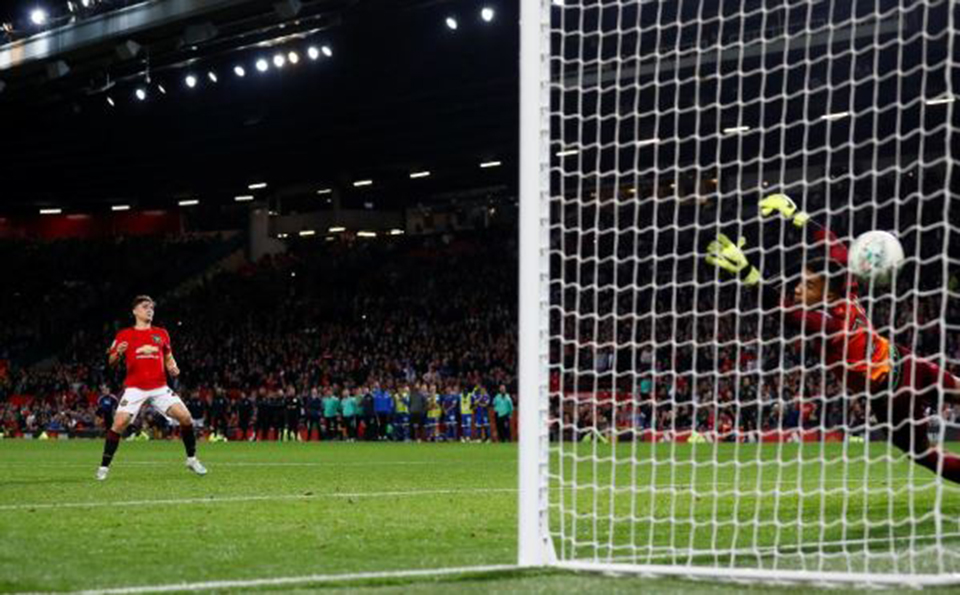 LONDON, Sept 26:  Manchester United’s current malaise was laid bare as they struggled past third-tier Rochdale 5-3 on penalties after a 1-1 draw in the League Cup third round at Old Trafford on Wednesday.

Ole Gunnar Solskjaer’s side, showing nine changes from the one that lost at West Ham United in the Premier League on Sunday, laboured against their League One opponents before taking the lead through Mason Greenwood in the 68th minute.

Sixteen-year-old Luke Matheson volleyed an equaliser eight minutes later to send the tie into a shootout.

United prevailed, though, keeper Sergio Romero making one save to spare their blushes as the hosts successfully converted all their spot-kicks with Welsh winger Daniel James slotting home the winner.

Although United struggled, they at least avoided the complete humiliation suffered by West Ham United who were thrashed 4-0 at League One Oxford United.

Manuel Pellegrini’s West Ham, fifth in the Premier League, were outplayed at the Kassam Stadium with Oxford’s goals all coming in the second half through Elliott Moore, Matty Taylor, Tariqe Fosu and Shandon Baptiste.

“It’s easy to say that we played very badly, but I think Oxford did everything they needed to win this game here at home for them,” Pellegrini said.

“They played with a lot of motivation, with desire and we didn’t play well.”

Oxford’s reward is a home tie against Sunderland who added another top-flight side to the League Cup scrapheap as they beat Sheffield United 1-0 — Max Power scoring an early winner.

There were no alarms for Premier League leaders Liverpool or Chelsea. James Milner and Ki-Jana Hoever were on target in a 2-0 win at MK Dons to set up a clash with Arsenal while Chelsea crushed Grimsby Town 7-1 to give manager Frank Lampard a first home win since taking charge.

Chelsea, for whom Michy Batshuayi scored twice and three players were handed their first starts including Reece James who also scored, will face Manchester United in round four.

“We got some players who haven’t been playing so many minutes, players that are younger, starting the game,” Lampard, who also brought on two debutants in the second half, said.

“A nice comfortable win having not won here yet so on those levels, of course I am happy.”

Aston Villa won an all Premier League match against Brighton and Hove Albion, prevailing 3-1 to set up a fourth-round meeting with Wolverhampton Wanderers who also needed penalties to get past Championship side Reading.

While Solskjaer will have breathed a sigh of relief that United avoided a shock exit, it was Rochdale’s 5,500 fans who were applauding most loudly after the shootout.

Rochdale are 17th in League One and were beaten 6-0 by Peterborough 10 days ago but defended valiantly against a United side lacking a clinical edge despite overwhelming possession.

“Go 1-0 up, get the second. That is a learning curve,” Solskjaer, said. “At this club you don’t just sit back and think one is enough.”